Getting Shafted by and for the Pike…

It was too good to be true. I know it, you know it, we all know it. When William Weld told Mr. Turnpike Director Whatever “Tear down those tolls!” it was only a temporary thing. For, if in fact there were any permanence to this, those toll plazas at exits 1-6 would have come crashing down as they did at exit 16! However, they did not. And frankly, ten years of being toll-less as a concession to keep our teaspoon money from bailing out the ocean of Big Dig cost overruns is pretty good. I still oppose the toll re-instatement and if any toll should be reinstated, only exit 1 would qualify as a last hurray as one exits Massachusetts into NY State.

According to the Boston Globe, however, those high-handed Boston-centric members of this special transportation commission deems it fit to place I-84, I-291, and I-391 under the purview of the Turnpike Authority. Why would they do that? Maybe to draw off some revenue to help pay for maintenance of these important highways, right? Ha, think again. This arrangement would allow the 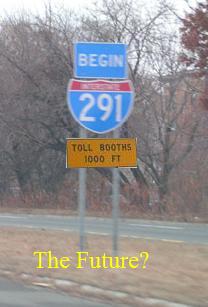 Turnpike, using its authority to impose tolls, to guess what, impose TOLLS! Tolls, my friends on roads already paid for and in the case of 291 undergoing rehab as we speak. So where would this money go? To the Turnpike Authority’s bank account to pay off its outrageous bills for the Big Dig!

State Rep. Sean Curran, in today Republican noted that imposing tolls on 291 would simply push traffic out onto parallel roads such as Carew Street in Springfield. It would create an immense traffic nightmare. Apparently, Boston and its officials are interested in sharing their legendary traffic woes with the rest of the state, how sweet! Then there is a practical question, where would you build the plazas? I don’t know about 84 in Massachusetts, but the spurs off of I-91 run through tight, congested areas and their ramps were built snugly into their surrounding areas. The Pike, by comparison was built as a toll road and mostly on underdeveloped land in the 50’s. Provisions were made to include toll plazas!

I might not be as angry about this if I knew this money was going to be used to fund and improve the Western Mass Transportation apparatus, but that is not the case. This is simply another attempt to sellout the Western regions of the state for the sake of the East’s screw up. Conspicuously, for whom the highway bell tolls are nowhere east of I-84. Neither of the interstates, actual spurs of I-90, the Turnpike’s interstate designation, are caught up in this. God forbid tolls be imposed upon 495, I-93, as in the buried Central Artery, or I-95/128. Maybe some tolls would dissuade people from driving there and turning the Tech corridor into New England’s largest parking lot.

Perhaps what is most disgusting about this is that it does stand a good chance of happening. The Western regions of the state, which cannot afford this, lack the political representation to adequate oppose the measure. Thankfully, WMass does have some political heavy hitters and both major candidates for governor are in opposition to this travesty.

Belying this whole tirade is the very real fact that our transportation infrastructure is crumbling. It would probably be in bad shape even if we did not need to nurse the Big Dig’s insatiable appetite. Roads and bridges need help everywhere, and imposing tolls on comparatively lightly traveled, yet essential arteries is not the solution. The state, and by that I mean the 200 members of the legislature and their benefactors, need to step back and write a budget that will finally get the money we need to improve our infrastructure. I’m a big advocate of reinvesting in our transportation system, but that reinvestment must be equitable! Even though we are on track for a balanced budget, the next governor and the legislature MUST be prepared to make painful cuts to other areas to support this transportation debacle.

I don’t think its a coincidence that job creation has been weak and our roads system is in tatters.