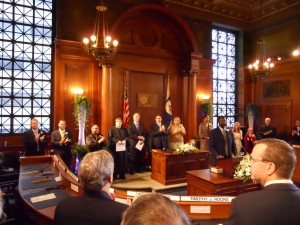 In a tasteful, but crowded ceremony at City Hall, Springfield swore in its City Council and its Mayor Domenic Sarno for another term.  Sarno will be serving the city’s first four year term following enactment of a ballot question in 2009 that extended the mayor’s term.  The School Committee is on a different election calendar and therefore members of that body neither faced the voters last November nor needed to be sworn in.

Typically, the city’s inaugurations are held in Symphony Hall, however the city still put on a show which included typical guests like Cong. Richard Neal and speakers on behalf of the Massachusetts Senate and House.  State Senator James Welch and Representative Angelo Puppolo spoke on behalf of their respective bodies.
Also in attendance were Sheriff Michael Ashe and District Attorney Mark Mastroianni.
The invocation was provided by Our Lady of Mount Carmel’s pastor, Robert White while City Clerk Wayman Lee administered the oath of office to the council.
Richard Neal in December 2011.

Congressman Richard Neal offered words of support on behalf of the United States House of Representatives.  He waxed somewhat nostalgic about his own service as mayor of the city and as a councilor remarking that he had taken office in that same chamber some thirty-four years ago.  Neal also emphasized the continuity between the council and the public service careers that began as members of that body.

Welch, in his first speech before Springfield’s organizational meeting as one of the city’s state senators, offered an anecdote about how his mother told him to say “hi” to mayor Sarno as evidence of the mayor’s personable demeanor and its benefit to the city.  He also insisted the area have no more storms.  The legendary weather events that plagued the Springfield area played a prominent role throughout the ceremony.
Puppolo, by contrast, offered more direct praise to Sarno, a former colleague of his.  When Puppolo resigned from the council in 2007, Sarno was still a councilor.  Puppolo conveyed his sense that Sarno had the respect and confidence of both governor Deval Patrick and House Speaker Robert DeLeo following the June tornado and October blizzard. 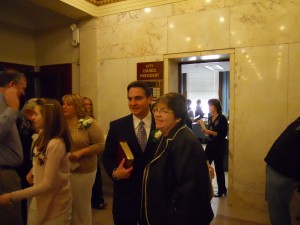 Mayor Sarno with then not yet retired Judge Mary Hurley during Sarno’s 2012 inauguration. (WMassP&I)

In his remarks before the audience, Sarno struck a notably humble tone, noting that the decision by residents to enact a four year term for the mayor was made for a reason.  Specifically, he said that residents were likely looking for more vision and a capacity to limit the short-term impact of politics upon the mayor’s office.

Sarno set out five pillars for his term.  He used a similar metaphor in 2010, but the pillars themselves differ from that speech.  Public safety, public education, job creation, citywide revitalization and fiscally responsible delivery of government services formed the basis for the mayor’s policy objectives over the next four years.  Sarno went on to note the extraordinary weather and also thank Gov. Patrick and Cong. Neal for their work and commitment to the city during its recovery.
Likely mindful of the public and not-so-public spats he has had with councilors as well as among councilors and residents, Sarno quoted President Kennedy saying “Together we have been partners in adversity.  Let us also be partners in prosperity.”  As the white mayor speaking before a largely white audience of a decreasingly white city, these words perhaps took on greater meaning.  Sarno closed by noting the rebuilding efforts in the city, fueled by unprecedented citizen participation, and asked residents to contemplate, somewhat Kennedy-esque, what they can do for the city of Springfield. 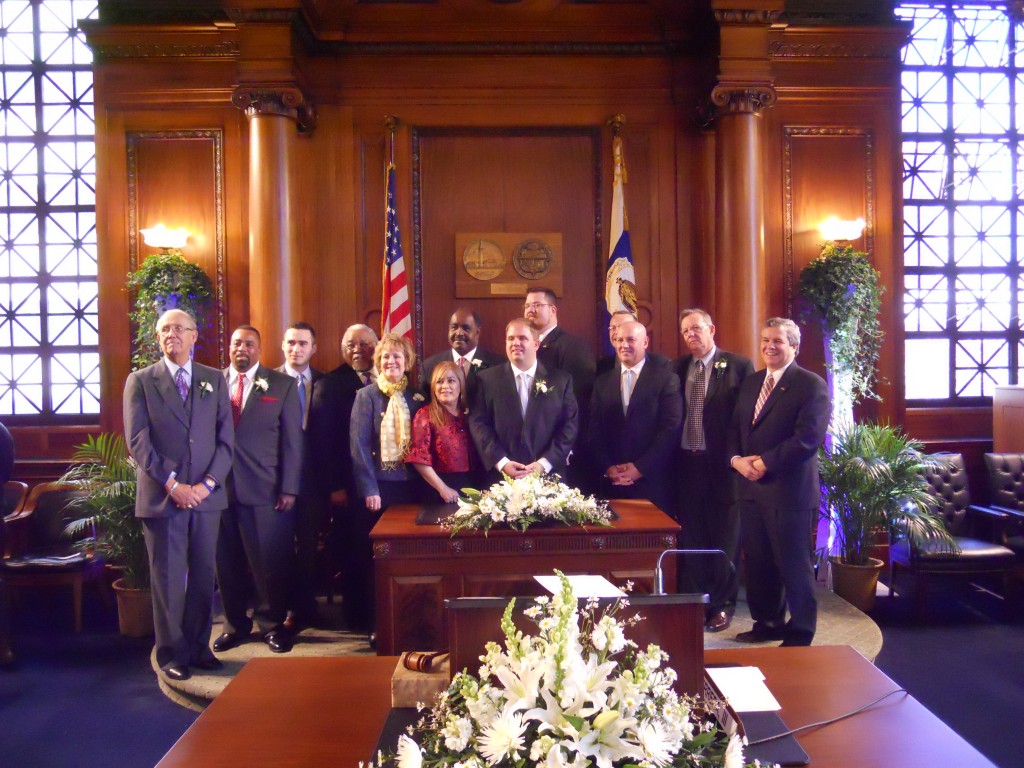 Whatever the fallout of Ramos’ decisions, return to Ferrera-era turmoil is unlikely.
(WMassP&I)

After the mayor’s remarks, the City Council began its organizational meeting.  Normally, this process is carried out away from the limelight as the main ceremony is held at Symphony Hall.  However, the combined nature left a captive audience to watch both the formal selection and swearing in of the council president and vice-president and the more mundane, if practical lottery that designates where councilors sit in the chamber.

Following a prayer led by the Reverend Talbert Swan, the council nominated and swore in at-large Councilor Jimmy Ferrera and Ward 8 Councilor John Lysak as president and vice-present respectively.  Judge William Boyle swore in Ferrera.  The added attention also gave Ferrera the chance to give a speech himself.  Although the television cameras had already bailed to film Sarno in a press gaggle, Ferrera gave a rather familiar generic boilerplate speech outlining his goals.  Some seemed overdue if not already implemented (putting city’s expenses online) or givens for an at-large councilor like himself (conducting a listening tour).  Others seemingly implied powers that the city council does not really possess.  However, an ad hoc casino committee is not outlandish, if a bit early even though no casino licenses have been doled out yet.

The overall flavor of Ferrera’s speech suggested a Council Presidency stronger and more meaningful than the position actually is.  At-large councilor Tim Rooke once recalled that the Council Presidency entailed greater de facto powers than it does presently including the right to represent the council before the press and elsewhere, excluding members dissenting from the way a measure passed.  Today, the presidency is largely confined to assignment of committees and moderation of debate at meetings.  Indeed the president must relinquish the podium to the Vice-President or the next senior member if he or she wishes to participate in debate. 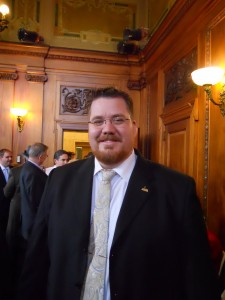 Interestingly, the decentralization of the council presidency in Springfield is in contrast to the centralization of power within presiding offices of state legislative bodies across the country.  Part of this is due to the absence of political parties in municipal government.  However both that factor and resulting diminution power of presiding officers on the Springfield City Council makes for a better run body like the small city council and empowers councilors with greater independence.

Puppolo and Representative Ben Swan offered additional remarks to the city council, but by that time much of the crowd had begun to spill out seeking refreshments in an adjacent room.  Others waited patiently during the remarks and while Vanessa Ford sang God Bless America, having sung the national anthem at the top of the program.
Tweet
Tagged with: Angelo Puppolo, Domenic Sarno, James Welch, Jimmy Ferrera, John Lysak, Mary Hurley