This post is the second in a series on the Hampden Senate District Primary Election. 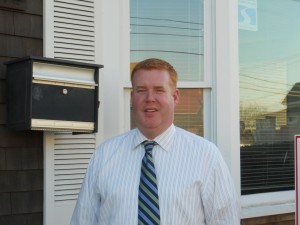 WEST SPRINGFIELD—After the heartache and drama of reapportionment left Massachusetts with one less seat in Congress, the less high-profile process would be the act of cramming 160 House districts and 40 Senate seats into the state.  For some the changes were only slight, but for others it would be dramatic.

With shifting demographics in Western Massachusetts, the conventional wisdom called for the creation of a new minority-majority district.  According to Senator James Welch of West Springfield, he volunteered his district.  “It was the right time to do it,” he said in a recent interview.  Soon enough, the result partly intended by mapmakers came true.  Welch drew a primary challenger, Springfield Ward 3 Councilor Melvin Edwards.

On one level the reconfigured district presents a challenge to Welch, 36, whose political career has been based in West Springfield since he was first elected to the Town Council from District 4 in 2003.  Suddenly his district’s line were flung deeper into Springfield including areas he had never represented.

In the eyes of some, Welch has ridden to his current position on the coattails of Buoniconti who exited the senate for an ill-fated bid to become District Attorney.  Amid a barrage of negative press and increased public scrutiny, Buoniconti’s political career was left in ruins.  Meanwhile Welch slipped into Buoniconti’s senate seat just as he had been elected to the latter’s House seat in 2004.

However, it is also fair to say Welch is unlike Buoniconti.  In interviews, Buoniconti could be aloof and distant.  During an interview at his West Springfield office near the town’s industrial heart off the CSX mainline, Welch spoke in a calm, unhurried tone, appearing more at ease than politically paranoid.  Reclining in a big chair in his living room-esque waiting room, his bright red hair stands out more than anything else, a perfect fit for somebody with about as Irish a name as one can get.

Welch’s family, like countless others with Hibernian names in the Northeast, was active in local government.  According to Welch, his father was elected “tree warden” obviously at a time when such a position existed.  His mother held less esoteric positions including registrar of voters and a seat on the board of health.  She was also very active in Democratic politics.

Of course those family ties are also ammunition to opponents.  Edwards has called Welch “a company man,” for being plugged into the West Springfield and greater Springfield political machines.

Welch’s responsibility extends beyond Westside, now of course.  With his district reconfigured, he has lost swaths of Forest Park and all of Agawam only to gain enough other parts of Springfield to have well more than half the city.  Welch also picked up more of Chicopee. 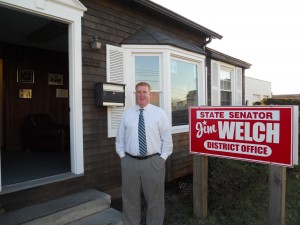 Looking over a map in his office of Springfield chopped into its 64 precincts, Welch pointed out all of the new wards and precincts in the district in addition to the few that were dropped.  “The great thing about Springfield is the neighborhoods,” Welch said noting that despite the city’s many ills, it nevertheless maintains strong neighborhood identities.  Working out from neighborhoods he already represents like Forest Park, downtown and the North End, he plans to use a strategy that has served him for years before.

Welch credits his pre-political career in finance in building his constituent-relations skills.  After graduating from Westfield State College, Welch took a job with State Street Bank in Boston in their international currency division.  He later returned to Western Mass and worked for AG Edwards.  In both jobs he dealt with clients on a regular basis whose satisfaction was critical to success.

From his earliest days as Buoniconti’s aide and on through his own political career, Welch says the development of trust is crucial.  Part of that is constituent services, which he learned how to keep up with in spades during his years as a Buoniconti’s only aide between both West Springfield and Boston.  “Treat everybody like they are your mother or grandmother,” Welch says and you can earn their trust.

Welch also says he has been plugged into the issues of the state’s third largest city ever since he entered the House in 2004.  Indeed, the West Springfield’s House district included and continues to include a precinct in the Liberty Heights/Hungry Hill section of Springfield.  Although the Control Board was formed the year Welch was elected, he says Springfield is a good example of how Beacon Hill‘s decisions resonate back home.

Welch seemingly admits, albeit implicitly, that the state is not doing enough to help cities as beleaguered as Springfield.  He insists that progress has been made, however, for municipalities rattling off the addition of tools for local budget including the Group Insurance Commission and some modest pension reform.

Welch says he has found the Senate a better place to air opinions than the four-times as large House.  “It’s a more intimate group,” he said referring to the ease of caucusing even though Democrats hold 90% of the Senate’s forty seats.  Senate President Therese Murray, Welch says “Encourages candor in caucus” contrasting with some insider criticisms of her.  Nevertheless given the chasm within the caucus between conservatives like South Boston‘s Jack Hart and liberal Jamie Eldridge, Welch’s claim is plausible.

For his part Welch puts himself in the middle of the Senate Democratic caucus’s range of views.  “Some days I’ll find myself on one end of spectrum, and other days on the other,” he says.

The smaller caucus size may be part of it, but Welch has his own committees to manage that may offer him some leverage to get a hold of other Senators.  He chairs the Municipalities & Regional Government committee, often a stopover for almost any home rule petition.  Welch also serves on five other committees.

Following his election in 2010, some criticized Welch for operating a campaign that only burst onto the scene in the last few minutes and overwhelmed one-time Agawam Mayor Susan Dawson and Union Leader Ronald Patenaude.  Such a charge may be harder to make this time.  Welch has already set up a satellite office on Boston Road in Springfield’s Pine Point neighborhood, albeit after Edwards challenge became public.

In some ways, Welch and Edwards, his announced primary challenger, share some attributes that are helpful on the campaign trail, like a self-deprecating sense of humor.  Recalling this year’s St. Patrick‘s Day parade, Welch, admitting to not being in the best shape, remembers being worn out before reaching the end of the parade.  By contrast, he said laughing, Elizabeth Warren, whose own children are Welch’s age, outworked almost anybody else at the parade darting from one side of the street to the other.

Incidentally, both Welch and Edwards have also served as ambassadors for Warren in the Springfield area.  Edwards introduced Warren at a fundraiser in Springfield and Welch along with Representative Mike Finn brought Warren to the legendary White Hut on Memorial Avenue in West Springfield. 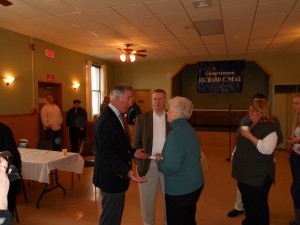 At a meet and greet at the Dante Club in West Springfield Welch and Finn hosted Richard Neal whose own redistricting lumped West Springfield among other communities within his district’s new lines.

As much as the attendees were there for Neal and the Continental breakfast, they seemed eager to speak with Welch, too.  Whatever good will he had worked to build in West Springfield over a decade in city politics seems to be holding.  Whether he can apply that to wider swaths of Chicopee and Springfield remains to be seen.

Representative Finn supports Welch for re-nomination and served with him on the Town Council.  At that meet & greet, he described himself as having “grown up” with Welch.  However, Finn also said the primary challenge from Edwards was good for the community calling it “a broad platform to express who you are.”  He added that Welch is one of the “hardest campaigners I know.”