As Belt Tightens, Pain Starts to Set In…

As Domenic Sarno rolled out his budget for the 2013 fiscal year on Tuesday, most of the observers in the crowd, largely just reporters and department heads, knew or had known for some time it would be bloody.  On paper, the layoffs were limited to only 12, but under a black light, the remains of another 96 jobs are visible.  Many jobs will go unfilled especially in the police and fire departments where attrition has eaten away at their ranks.

On balance, the 2013 budget is painful, but not quite a bloodbath.  However, its four year projections portend a slaughter sooner or later.  The City’s non-discretionary costs will eventually digest almost all of the budget.  Absent greater state aid, a building boom to force the tax base up, or some other manna from heaven, the city would have to gut its police and fire departments over the next few years just to keep a balanced budget.

The budget’s timing was also controversial, too.  Mayor Domenic Sarno responded harshly to a question about the budget’s late introduction in the calendar.  He pointed to the death of Officer Kevin Ambrose as part of the delay, noting that the budget’s presentation had been planned for last week.  City Hall and media sources confirm this as the reason for at least the last week’s delay.  Under state law, the mayor of a city must present the budget to the City Council within 170 days of the municipal government’s organization.  Sarno’s submission to the council occurred with only a week to spare under law.  Technically, the council has 45 days to review it, but the fiscal year begins only 18 days after Sarno presented the budget.

Indeed, only Ward 7 Councilor Tim Allen was present for the budget’s unveiling.  Councilors had been given the revenue measures to approve months ago, on the theory, Chief Administrative and Financial Office Lee Erdman said at the time, that the budget would be developed on the assumption of the revenues actually approved.  However, councilors had felt that they were being boxed into a corner as they were never informed what the budget would look like if some revenues were increased and others were not.

Erdman also noted that the delay was due, at least in part, to concerns about what state aid would look like.  There may be something to that as Governor Deval Patrick initially proposed level funding for unrestricted local aid contingent on how the state finished out the current fiscal year.  Therefore, city budget officials had to plan on less than current aid.  However, those concerns likely fell by the wayside when both the House and Senate budgets approved level funding for state aid with no strings attached.

Sarno had meetings with state legislators and executive financial officials seeking additional means to squeeze more money into the budget.  The venture was largely unsuccessful.  On some level, those efforts suggested a public relations strategy on the part of the mayor.  Some of the measures had zero chance of passage like a waiver from Proposition 2 ½.  Others were more likely such as waivers to the city’s mandatory school contribution, but have thus far been denied.  Therefore, the efforts may have been made, in part, to put more pressure on the Council to approve the budget as is and to approve the additional revenues.  It is just as likely that the mayor sought to emphasize Beacon Hill’s role in the city’s problems, specifically the cuts to local aid.

Still, the mayor presented his budget on the assumption that it would be passed as is or at least with only minor cuts.  It also assumed all of the revenue measures would pass.  So far only an increase in the city’s hotel tax and possibly rules about tag sales face any significant opposition.  However, that hotel tax increase alone accounts for $400,000, a small amount relative to the budget, but a significant one in tight fiscal times.  Moreover, the mayor warned that if either the revenue measures are not fulfilled and/or further cuts are made more layoffs would follow.

The budget itself is stark.  In addition to the 12 layoffs, 96 job vacancy eliminations and the revenue increase, the budget closes three libraries (although one is mostly due to a lease expiration pending a new branch at Dryden School on Surrey Road); cuts one fire company; reduces park maintenance; and eliminates trash pickup at all 4+ unit apartment buildings in the city.  According to Sarno and his staff, since the economy went south in 2008, the number of Springfield non-school employees has fallen to 1,270 from 1,580.  The budget requires $9 million be taken from stabilization reserves, an amount the mayor appears reluctant to increase.  Further withdrawals would lower the reserves to below 5% of the overall budget, a danger sign to creditors and rating agencies. 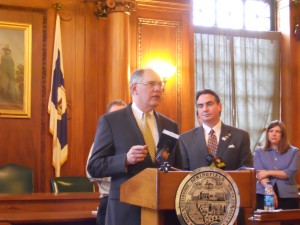 Much of the budget crunch is due to increasing annual costs that are largely in the non-discretionary column.  Moreover, although local aid is flat, school aid to the city has increased and that has the ironic effect of raising the city’s mandatory contribution to the schools, detracting from other city services.  However, Springfield was also hit by a dramatic falloff in the property tax levy of $7 million dollars as property values fell.  City Assessor Richard Allen attributed that decline to foreclosures as well as a loss of taxable properties after last year’s tornado.

Although the tornado itself did impose tremendous costs on the city, finance officials said that the effect was only indirect.  The city is permitted to deficit spend (that is borrow) money to pay for emergencies and, aside from questions about Elias Brookings reconstruction, it will likely recoup most of the costs from FEMA or the state.  However, it must nevertheless pay interest on that borrowed money to be repaid in the future.

Budget Director Lee Ann Pasquini said that the city is on course to recover money from the federal government both for June tornado and the October snowstorm.  However, the high costs of the damage in both cases (the snowstorm actually required considerably more debris removal) required the city submit all of its paperwork and the paperwork of its vendors correctly.  Consequently, there have been some delays in receiving reimbursement, although Pasquini said none of them were due to dithering on the part of the city or the federal government.

The mayor’s budget will go before a series of City Council subcommittee hearings.  However, it is unlikely that much will come about from those except an explanation as to department heads’ thinking when planning their budgets.  The main event will take place the council debates the mayor’s budget in full session when various motions to cut the budget will be offered.  The Council seems no less reticent than last year to raise the Hotel tax so they may seek cuts at least in an equal value to the hotel tax’s expected revenue.  However, other Councilors may itch for action that may give them more of an opportunity to review the budget.

Sarno, in urging the Council to approve the higher hotel tax, noted that legislators point out that the city has not fully exercised the “tools” the state has given it.  However, the $400,000 is a pittance compared to what the city really needs and appears to be little more than a duck from Beacon Hill.  Should the Council and the mayor come to resolution not just on the budget, but on its politics and practicalities, the next move will be a more concerted lobbying efforts for a longer term solution to city’s finances, including working on improving its tax base and more reliable state aid.