Our One Hundredth: Only the Beginning of the North End… 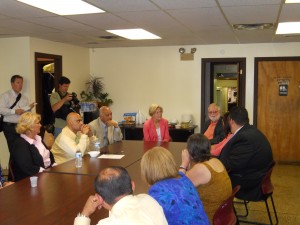 The Campaign for the United States Senate in Massachusetts came to heart of one Springfield’s most beleaguered neighborhoods today as Elizabeth Warren met with activists in the city’s North End.  Seated at a table with members and allies of the New North Citizens’ Council, whose residents are largely Hispanic, Warren, members of the Council and numerous social services workers discussed the challenges facing the community and those working to improve conditions.

While Warren was on message at the event, she engaged many, if not all of the attendees, commenting directly on the issues mentioned.  Many attendees emphasized how budget cuts on the city, state and federal level have devastated education and services to students, families and the elderly.  Springfield Elder Affairs Director Janet Rodriquez Denney noted that 29,000 people or 36% of Springfield’s population are elders.  That number, Denney noted, will explode in incoming years putting further stress on city services without additional aid from Washington.

Rexene Picard of Futureworks, a job training group in the city, pointed out that her organization has successfully retrained thousands of job seekers during the recession, and that they could do more.  However, that would require more resources than Futreworks currently has.  Denney pointed out that education is critical for many of the olders people she works with as well.  Warren wholeheartedly agreed noting that education, one of her key themes, is critical whether it is Head Start, college or job retraining later in life.  Denney and virtually all others at the table looked forward to Warren going to Washington so that through her they could be a part of the decision-making processes that affect their communities and neighbors. 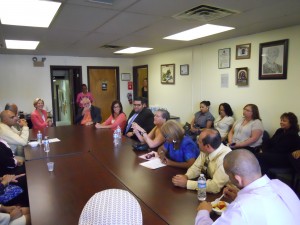 Warren’s visit came amidst a broader stop in Western Massachusetts that included stops in Chicopee and Amherst.  In Chicopee, she received a banner from the Bellamy Middle School Cheerleading Squad that was held during the Holyoke St. Patrick’s Day Parade, which Warren attended.  However, the stop in city’s predominantly Hispanic North End reflected not only her awareness of communities of great need.  It also sought to put to rest any concerns that her campaign or Democrats more broadly were neglecting a critical voting block.  At the June 2 Democratic convention, State Representative Cheryl Coakley-Rivera pointed out that the schedule featured no Hispanic speakers.  The state party issued a mea culpa, but nevertheless, reaching out and turning out the vote among all minorities will be critical for Democrats.

Still at today’s meeting, it was fairly clear that Warren was among friends.  Maria Perez, housing director of the New North Citizens Council and President of Women on the Vanguard, offered a specific thanks to Warren for founding the Consumer Financial Protection Bureau.  Predatory lending practice are rampant in poor and minority communities and the work of the Bureau, which Warren fought for as part of the Dodd-Frank financial reform bill, includes addressing these abuses. 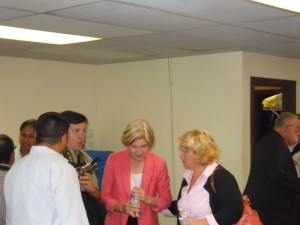 The Republican reported that several of the attendees, like Jose Claudio, were happy that Warren made the trip at all.   Claudio noted Warren came despite the uncomfortable heat and construction that lay just outside the council’s offices on upper Main Street.  During the meeting, Warren herself also emphasized the importance of infrastructure improvements in roads, transit and water and sewer systems.

The appreciation for Warren’s visit was widely shared by those in the room.  Warren noted that the solutions and work to help communities like the North End were at the table with her.  “All the pieces are in a room,” she said.

Noting program cuts, Janet Denney, the city’s Elder Affairs director, said politicians were harming services without even consulting the people on the ground.  Officials were, “not including all of us,” she said referring to the others at the table and in similar positions elsewhere.  “That’s a wonderful way to put it,” Warren responded.  The country prospers, she said, “not by putting investment in some of us,” but in everybody.