Housing advocates and community activists breathed a sigh of relief on Tuesday as United States District Court Judge Michael Ponsor killed a lawsuit by various banks to strike down Springfield’s new foreclosure ordinances.  Ponsor’s ruling sided with the city entirely and against all of the banks’ arguments.

In a lawsuit against the city, a consortium of banks argued, among other things that the ordinance was preempted by state law; was an impermissible tax; and ran afoul of the US Constitution’s contract clause.  Supporters of the ordinance praised the ruling and rallied on the steps of City Hall Thursday to mark the ruling.

The Springfield City Council passed the ordinances unanimously last year in an effort to address the foreclosure crisis that has hit the city particularly hard.  The two ordinances are referred to in the decision by their primary purposes.  The “Foreclosure Ordinance” requires banks foreclosing on a home to post a bond and maintain such properties or otherwise sacrifice part of the bond to fund the city’s maintenance of those properties.  The “Mediation Ordinance” required all banks foreclosing on a property to attempt mediation with the borrowers.  However, that ordinance explicitly states that compliance with its provisions shall not delay a lawfully executed foreclosure.  The ordinance uses the same timeline as a foreclosure, but cannot constrict or lengthen that space of time.

The ordinances were largely the work of former Ward 6 Councilor Amaad Rivera.  Although some foreclosure measures had been considered by councilors before Rivera’s arrival on the Council in January, 2011, none had advanced into ordinance form.

In a twenty-one page opinion, Ponsor, struck all of the banks’ arguments and granted the city’s request summary judgment declaring its laws valid.  The forum was in federal court at the request of the city.  Because the banks’ suit included a federal question (the contracts clause), the case was eligible for review before a federal court, which can hear concurrent state claims as well.

The banks’ strongest argument was probably based on preemption by state law, however.  Under the Massachusetts Constitution and the Home Rule Procedures Act, cities and towns are permitted to pass ordinances and by-laws provided that they do not contradict or frustrate a state program.  That proviso gives a wide breadth to state power such that many municipalities often seek special legislation before they attempt anything bold.  That said, there is a legal burden that must be met before an ordinance can be struck down and Ponsor said the banks had not met it.

In short, the banks argued that the state occupied the field in this matter and implicitly, rather than explicitly preempted the ordinances.  Ponsor was unconvinced by the banks’ argument that the state’s mortgage and sanitary laws left no room for the city’s actions.  Although there is no denying that the law affects mortgages, the banks could not show how the city’s ordinance in any way conflicted or frustrated either state law‘s intent or operation.  As Ponsor wrote, “imposition of additional duties by the ordinance does not create the degree of ‘sharp conflict,’” the legal standard for state law preemption, “–or indeed any conflict–between the state and local law.”

The banks’ were equally unsuccessful on their contract clause argument.  According to Ponsor’s decision, mortgage lenders can expect regulation in their contracts and therefore cannot claim they did not foresee governments regulating their contracts.  Moreover, the ordinances did not rise to “substantial impairment” of the contractual process, the legal standard for striking a law for interfering with the contractual process.  Moreover, the ordinance fulfills a compelling government interest (fighting blight and the housing crisis), which would enable the ordinances to prevail even if they failed the substantial impairment test.

Finally, the banks argued that the city’s requirement of a bond and taking of part of it to administer the foreclosure program constituted an illegal tax rather than a fee.  While it crystal clear in Massachusetts law that municipalities can only tax at the legislature’s discretion, fees can be more liberally applied.  They must, however, be for a specific purpose or service.  Ponsor found that that the ordinance established a valid fee because the funding the city retained was kept either of the maintenance of the foreclosure program or to maintain properties that go to pot during the foreclosure process.

The banks made a few miscellaneous federal Constitutional claims that Ponsor dismissed with only a paragraph or two each.  Ponsor was clearly unimpressed by the banks’ arguments and that lack of receptiveness comes through in his opinion, particularly, the key quote, “The modest effort made by the city to soften this crisis through the promulgation of the two ordinances violates no Constitutional provision or state statute.” 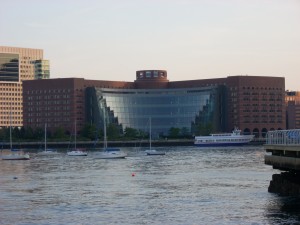 While supporters rallied, however, the banks kept their options open including an appeal to the Court of Appeals for the First Circuit, which is based in Boston.  Because much of their argument is based on state law, it is improbable that the issue would go any further than the First Circuit (as in to the US Supreme Court).  However, the appeals court could certify questions to the Massachusetts Supreme Judicial Court with regard to state law so that any ruling it renders is consistent with state jurisprudence.

Nevertheless, supporters had cause to celebrate.  In a statement after the ruling, Rivera and other activists, including the group, No One Leaves, praised Ponsor’s decision.  Rivera called it a “historic decision” and one fitting of Springfield’s status as the City of Firsts.  No other city has passed a local ordinance quite like the one the ones at issue.

Even so, Rivera and allies were careful to apportion blame to larger financial institutions and not the local banks which were the lead plaintiffs in the suit.

Ward 3 Councilor Melvin during a brief interview at the headquarters for his State Senate campaign, was also pleased with the ruling.  He extended his congratulations to Rivera and thanked the former councilor for his work to bring the issue to the forefront.  Edwards noted that the ordinance holds banks responsible for the risky loans that led to the crisis, “The Court’s ruling reinforces that.”

Ward 2 Councilor Mike Fenton was also happy with the ruling stating that councilor had long been convinced of the ordinances’ constitutionality.  “My only hope is that he City will now (finally) enforce the ordinance as it is written,” Fenton said in an email to WMassP&I alluding to the city’s non-enforcement of the ordinance thus far.

That concern was also mentioned in Rivera’s statement.  The city had claimed that it was not enforcing the ordinance pending the outcome of legal challenges.  Ponsor denied a temporary injunction primarily on those grounds.  With his ruling, however, there are concerns the city may continue to drag its feet.  Certainly an appeal to the First Circuit could give the city license to hold off further, possibly up to a year as an appeal plays out.  Alternatively, the First Circuit could issue its own injunction, but is no more likely to do so than Ponsor unless the city begins enforcing the ordinance.

A spokesman for Mayor Domenic Sarno could not be reached for comment at time of posting.

When activists gathered on Thursday to celebrate the ruling, they also called for the law’s immediate implementation.  It remains to be seen how quickly that will be.