Members of the Massachusetts Governor’s Council must see to it that only qualified individuals make it onto the commonwealth’s judiciary and boards.  Therefore, although the body meets only weekly and its powers are limited, its impact can be paramount.

This is an elected body and we must be accommodate councilors right to vary their threshold for confirmation.  Fundamentally though these decisions must rest on an appointees qualifications.  Paeans to specific issues without due consideration for these other factors is a recipe for disaster.

In light of this, we endorse Kevin Sullivan, a lawyer and Westfield School Committee Member for the Democratic nomination for the 8th District Governor’s Council seat.

Former Springfield Mayor Michael Albano has promised not to confirm judges that would  oppose same sex marriage.  He has also made similar commitments for labor.  While we are fully supportive to the protection of both gay rights and labor rights, such promises offer pandering assurances of outcomes, not a fair and proper execution of judicial power.

Albano has other problems.  At the eye of Springfield’s last fiscal storm was Albano.  Furthermore the rash of indictments of his closest staffers leave Albano too tainted to be trusted with a position that confirms judges.

Chicopee City Councilor Gerry Roy says he is running as an outsider, but the fact is he came in from the outside only last year when he was elected to the Council.  This means only five months after being sworn in, Roy is looking for another gig.

Roy’s outsider claims are not without merit, but unfortunately, Roy has shown himself to be more interested in lobbing bombs at his opponents.  His ad hominem attack against Sullivan on the basis of Sullivan’s brothers’ political careers was neither professional nor fair.  Would Roy, a Real Estate Agent, see any conflict when confirming Land Court judges?  Or a real estate attorney as a judge?

Sullivan has had a lengthy career in private practice in downtown Springfield.  He has dealt with a variety of judges, government agencies and others bodies.  He has seen what has worked and what has not worked;  which judges do their job well and which ones do not; which judges are fair and which are biased. 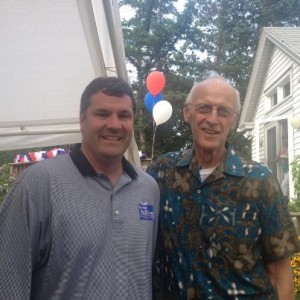 Likewise, Sullivan has the respect of the legal community, including Hampden County D.A. Mark Mastroianni.  Legal professionals want somebody competent approving the commonwealth’s judges.  Departing Congressman John Olver also supports Sullivan.  Olver has built a reputation and would not put his seal of approval on just anybody.  The retiring Councilor, Thomas Merrigan, and Northwest D.A. David Sullivan among many others have also thrown their support to Sullivan.  Yet Sullivan can succeed, not because of endorsements, but because his campaign has also been organic and from the ground up.

Finally, Sullivan’s own time on the School Committee gives him a healthy background working on a body with a specific mandate and a diversity of opinion, while maintaining civility.  The latter is much needed these days on the Council.  The political background of Sullivan’s family is not detrimental, but rather could be a critical to assuring that the governor appoints Western Massachusetts’ judges and other officials who know and understand the region’s needs and character.

For these reasons, we advocate Kevin Sullivan’s election on Thursday, September 6 for the Democratic nomination for Governor’s Council.