Hampden Senate by the Numbers…

In a press release dated on Saturday, Springfield Ward 3 Councilor Melvin Edwards returned to the campaign trail after a devastating knee injury earlier in August.  However, with only four days until the primary, Edwards has considerable ground to make up to catch James Welch in the Hampden Senate primary.  Campaign finance reports released Wednesday suggest that gap is even wider.

Unlike candidates for just about any other office in Massachusetts, legislative candidates do not need to disclose their campaign finance reports until a week before the primary and again before the election.  Candidates for Governor’s Council or Mayor must release reports at much more regular intervals.  That means that that gauging the money race for the Hampden Senate race has been impossible until now.

The difference in the reports could not be more striking.  From beginning of this year until the filing date, Edwards raised $7,700 on top of $7,000 carried over from last year.  As of August 19, Edwards had only $48 cash on hand.  Welch started the year with only slightly more than Edwards plus $2,000 debt to himself.  However, Welch raised nearly six times as much as Edwards and spent about as much more too.

To be fair, however, Welch’s expenses are inflated because he maintains two offices, one of which has been open continuously since the year began.  State legislators do not appear to receive government money to maintain a district office and so many use their campaign funds to do just that.  It also appears that these funds are used to maintain the office and buy supplies as well.

However, the expense of funding a district office does not explain everything.  Welch’s media buy of $5,000 is nearly a third of everything Edwards spent.  Welch’s expenditures also indicates a high number of fundraisers compared to Edwards as the expenses to the venue are listed as well.  At least one of those venues indicates that Welch has held fundraisers in Boston.

However, what may be more telling is what is in the contributions list.  It is not surprising that Welch has more contributors running the gambit of Valley political luminaries, Political Campaigns, Boston-area contributors, unions and his base in West Springfield.  Incumbent senators are bound  to do that and certainly the Edwards camp knew this going in.  Taken together, it is no surprise Welch raised as much as he did.

However, on Edwards side, there is an odd disconnect between the political support and financial support he has received from his colleagues on the Council.  One cannot underplay that political support.  Ward 1 Councilor Zaida Luna and Ward 2 Councilor Mike Fenton have substantial wells of support both within their wards and beyond to benefit Edwards.

Several of Edwards’s Colleagues have backed his Campaign (WMassP&I)

However, no City Councilor from Springfield has contributed to Edwards’s campaign, either individually or from their own campaigns, a common tactic politicians use.  By last count, Edwards included as official supporters from the Council, Luna, Fenton, Ward 8 Councilor John Lysak and at-large Councilor Jimmy Ferrera.  At-large Councilor Bud Williams also hosted a fundraiser for Edwards, so it may be fair to count him as a supporter.  However, none of them have contributed to Edwards’s campaign at least not in excess of $50, which is the threshold for reporting to the state Office of Campaign of Political Finance.  Cross-referencing with each of those councilor’s campaign accounts, no expenditure to Edwards’s campaign was recorded either.  An expenditure of any amount should have been recorded there.

The Edwards campaign, however, insists that these things do not matter.  What matters, the campaign says is the grassroots.  Campaign officials say that they have been canvassing hard in Springfield and Chicopee and to a lesser extent on Welch’s home turf in West Springfield.  They also tout a Sierra Club endorsement Edwards earned for his work on Biomass.  However, the sense from Chicopee political activists suggest the portion of the city in Welch’s district is leaning toward the incumbent.  That leaves the Edwards camp with relying on Springfield.

Analyzing voting turnout in Chicopee, Springfield and West Springfield, grassroots appeal will absolutely be necessary.  The placement of a primary on a Thursday may shake up numbers, but there is no comparable data to make a fair guess.  That leaves the 2010 primary as the only fair comparison.  Assuming voter turnout holds despite the Thursday election date, Edwards will have his work cut out for him.

Primary numbers turnout is difficult to compare because technically a primary is two simultaneous elections.  That is one for Democrats and one for Republicans.  Unlike in 2010, there is next to nothing on the Republican ballot this years anywhere in the communities in the Hampden Senate district.  Only the Governors Council GOP ticket features any competition and the Democrat in the Governor’s Council is widely thought to win.  Indeed, Lysak, the Ward 8 Councilor changed his registration from Republican to un-enrolled in order to vote for Edwards. 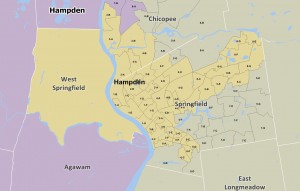 The precincts in Springfield that were districted into the new Hampden Senate district had an average turnout of 8.41%.  The range varies from turnout as low 3.3% in heavily minority wards to 14.7% in the mixed/white-leaning Ward 2.  However, the overall number is quite low compared turnout of approximately 14% in Chicopee and 20% in West Springfield for the 2010 primary.

Approximately 70% of Springfield’s precincts are in the Hampden Senate district.  Voter registration shifts dramatically, especially in the run up to an election, however Springfield has had about 92,000 registered voters over the last few elections.  If evenly distributed among Springfield’s 64 ward, that would put about 65,000 voters in the Hampden Senate District.  West Springfield and Chicopee’s numbers (in the wards in the district) have been about as consistent at 16,600 and 11,000.  At first blush that would give the city’s resident candidate an tremendous edge.

Edwards claims grassroots supporters to be on his side, but Welch has support from SEIU, the Massachusetts Teachers Association and the AFL-CIO, which can mobilize workers, including from within communities of color.   Welch’s campaign has also gone on radio and TV and sent our mailers.  Additionally, Orlando Ramos, an aide to Welch, ran for City Council in Ward 8.  Although defeated by John Lysak both times, Ramos may, too, have a coalition that can pull votes for Welch that might otherwise go Edwards.

Returning to the complications of a Thursday primary, the impact favors Welch.  Any voter on the street may be confused by voting on a Thursday, but the low-turnout precincts that Edwards will need to win will probably feel the impact disproportionately.  However, that could be counteracted by deliberate efforts by Richard Neal’s campaign to drum support in the congressman’s hometown and deliver a blowout victory in the primary for the 1st Congressional District.

Complicating matters further has been Edwards’s absence from the campaign trail while he recovered from surgery.  Representatives of his campaign did not stop, and indeed represented Edwards at forums and other events.  However, nothing replaces the candidate himself.

Nothing is determinative, however.  If the Edwards campaign has organized as well as it claims to have, it may be able to overcome its tremendous fund raising disadvantage.  At the same time, Welch has clearly grown in his time in the senate and reached further out into the city that is not his home.  Based on the empirical data alone, the funds and the turnout regime, the odds favor Welch slightly.  Of course, in a race with so many unknowns, anything can still happen.