Fighting not for “New” Holyoke, but the Next Holyoke…

HOLYOKE—In all of Massachusetts four western counties, only one of the area’s seats in the legislature is open. In some ways, the contest, which almost did not happen, has become a battle for the soul and future of this one-time industrial urban powerhouse.

Technically, the race is a three-way election. Two Holyoke City Councilors, Republican Linda Vacon, who represents Ward 5 and Democrat Aaron Vega, an at-large councilor, are in the race with Jerome Hobert, running on the Green-Rainbow Party line. Hobert has been disavowed by the party and his fairly vapid website “testimonials” beg for questions as to whether or not he was a plant to draw votes from Vega. Hobert has admitted to using the Green-Rainbow line simply to get on the ballot.

Of the three candidates, only Vega got onto the ballot the traditional way. Both Vacon and Hobert got onto the ballot by writing their way on during September’s primary. Vega had began the race challenging then-incumbent Michael Kane, who resigned the campaign and the seat earlier in the year to pursue a private sector job. “It was not about Michael,” Vega said of challenging the former rep.  Rather it was about making a change in the areas where Vega sees the state as an ally and as an obstacle for Holyoke.

During a wide-ranging interview in a café on the city’s Route 5 corridor, Vega, currently serving his second council term, says his city is sitting at a crossroads and is in a position now to make the most of its potential. The son of the late community activist Carlos Vega, he says he got involved in politics shortly after opening his yoga studio in 2008.

Vega explained how the business has had a halo effect on Holyoke bringing in people who also patronize other nearby downtown businesses. People, he says, “realize it is not a scary place.” Following the studios earlier success, together with other residents he helped organize CRUSH, Citizens for the Revitalization and Urban Success of Holyoke.

Vega grew up in the city before moving away to pursue other endeavors such as in film.  Having lived in places such as New York and New Hampshire before returning, he says he feels he can appreciate the city both as a son of the city and as a newcomer.

Since the swearing in of Mayor Alex Morse, who endorsed Vega earlier this year, the city has been fraught with tension between the “New Holyoke” and “Old Holyoke.” Many cities like Holyoke have such battles, but Morse‘s election, which challenged both the political infrastructure and norms, seemed to bring that out into the open.  To outsiders, on the City Council Vega has been identified with the “New Holyoke” and Vacon with “Old Holyoke.”  Hobert appears more in line with the “Old” as well.

When asked how his opponents criticize him, Vega said that Vacon and Hobert have tried to pigeonhole him with Morse. Specifically, that Vega only represents a small, artsy dimension of the city trying to turn the mill city into Northampton. The tone of the campaign appears to back that up.

Vega disputes that critique, but understands its genesis. “The city is changing he says,” and while respecting the city’s past, “we need to be accepting of new ideas.” He acknowledges that many supporters include those who view the city positively, but differently, and that the city’s political elite fear losing power. However, Vega says that whatever division may exist between new and old Holyoke, there should be “One Holyoke.” “Even though it sounds like a good tag line,” he insists, “it is true.” 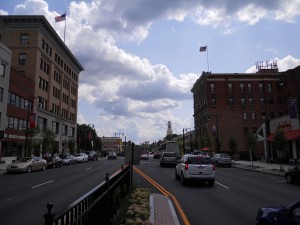 A view of Downtown Pittsfield (WMassP&I)

To some extent, that battle seems to take on air of accepting or rejecting efforts elsewhere in the state that have helped places like Holyoke. Vega says Holyoke like Springfield down the river has a reputation in Boston as a needy city. However, the city has options. In particular, Vega cites state programs that have turned Pittsfield into an arts hub in the Berkshires while bringing along other new businesses along the way.

Holyoke will remain for the foreseeable future dependent on state aid and securing those moneys will be essential for whomever the rep is. Vega hopes to build relationships with would-be colleagues in the House and continuing ones with current Western Mass reps to ensure Holyoke and the region get the help both need. Part of that, he says, will be ensuring that the state writes its budget in a way that ensures future expenses are properly budgeted, rather than seemingly gyrating from year to year.

Local aide actually is only one of many issues that speaks to a divide within the State House between urban and suburban legislators. Today, cities and suburbs often have to vie for resources and legislation, some of which can rankle the other side.

However, Vega said that this divide may be opportunity, too. As an example, he cited the Bottle Bill, which would expand the deposit to non-carbonated and non-alcoholic drinks. Historically, opposition has come from the suburbs, which oppose its cost, but Vega says suburban legislators may not see how the non-deposit battles add to urban litter. “We can invite them,” to Holyoke and see the impact first hand and vice-versa on suburban issues.

Like much of the country, Holyoke needs attention paid to its infrastructure and education. He pointed to, among other developments that need funding and expansion, the planned Holyoke passenger rail stop and redevelopment along the city’s historic canals. Vega adds a legislator should not just see these projects funded, but ensure they happen. The Canal Walk, he says, has been funded for some time, but a lack of advocacy has allowed the state to sit on commencement of the project.

Vega would like to see more public transportation investment noting that a ride to UMASS-Amherst can take up to an hour. Shorter commutes might better connect the city to area colleges “I’d like to see more of a stake [in Holyoke] from the Five Colleges,”

In the area of education, Holyoke has several Level IV under performing schools, and Vega claims some experience in helping to turnaround schools.  Experience he would like to bring to Boston. He cited his work on the Morgan School’s turnaround. Judging by his description, reforms took a holistic approach to right the school’s ship. Specifically, reforms sought to aid children in multiple dimensions of the lives, including GED programs for their parents.

As the campaign has marched toward Election Day, it is hard not to pick up on the sniping among the candidates. At the first debate held in Holyoke, both Hobert and Vacon hit Vega for not committing to resign his Council seat if elected. Vacon has said she would resign both the Council and her full-time job. State law allows a person to hold both, and locally, the record is split on what officials do.

In West Springfield, both James Welch and Michael Finn, when elected to the State House in 2004 and 2010 respectively served out their Town Council terms. By contrast, then at-large Springfield City Council Angelo Puppolo resigned when swon in as a Rep in the House in 2006. However, neither offers a perfect comparison as Finn, Puppolo and Welch’s council districts were remarkably different from their state rep districts.

At approximately 40,000 people, Holyoke is closer in size to West Springfield than Springfield by far and the Fifth Hampden District is contiguous with Holyoke, Vega’s existing constituency.

Vega outlines a few principles were he to hold both seats. He would refuse his Holyoke council salary and would not run for council again. Given the schedule of the legislature, which is often in formal session only once or twice a week, Vega could easily attend to Council duties as well.  Vega adds that he would be able to remain visible and active locally, which he says a rep should be doing anyway.

“For the most part it is a scare tactic,” Vega said of his critics’ attack. He said some voters think a state rep has to move to Boston, which would, Vega observe, defeat the purpose of being a rep. Vega also leaves the door open to resigning at a later date if a committee placement takes up too much time.

Vacon also launched a new attack on Vega in their WWLP debate on Tuesday. She implied that one of her competitors have paid sign holders and canvassers. Vacon did not, according to the Republican, offer any proof for her assertions, but it drew a strong rebuke from Vega, saying her claims were an insult. Vacon emphasized she did not name which opponent, but she had based her claims on a Craigslist ad that offered to pay volunteers for Elizabeth Warren, the Democratic nominee for US Senate.

A source familiar with grassroots canvassing, particularly among third party groups, found Vacon’s claims to be strange and apparently unsupported. According to the source, which requested anonymity to speak freely about the activities of other groups, it is entirely reasonable that a third-party group could be working to elect Warren independently of other Democratic races. For Vacon to equate independent, third-party pro-Warren activity with Warren is simply unsupported by the facts Vacon appears to cite, the source said.

Through the Massachusetts Democratic party’s coordinated campaign, some joint Warren-Vega events and activities have been held in Holyoke.

WMassP&I, using a Google search, connected the phone number in the ad to the League of Conservation Voters, which has been active in the Senate race. It is entirely reasonable that its activities in Holyoke have nothing to do with Vega or any rep race.

The battles over that nonsense notwithstanding, Vega sees the race in starker terms. The race is not just about a new rep, rather “it is about Holyoke’s future” and “how we are moving as a community and a state.” In the legislature, he wants to continue the traditions that made Massachusetts a leader on equal rights, health care, green energy and investments in students and teachers.

And see more of those in Holyoke, too.