In the Rearview Mirror: Digging Down Ballot…

Nearly ten days after the election, post-mortems of the 2012 campaign season go on. Most of these, of course, focus on the presidential election. The Massachusetts Senate race, while destined to be studied for generations, was more or less put to bed until the White House sprung Niagara-style leaks about John Kerry joining the Cabinet. Now the dissections will come much sooner and with more urgency. However, left unsaid, other than a lonely article about Aaron Vega’ resounding win in Holyoke, was a real look at how and how other races on the ballot went down.

Vega’s race in the Fifth Hampden District is as good a start as any. Whatever divide between “New” and “Old” Holyoke, Vega, in a presidential year, was always favored to win. Indeed, the only wrinkle in that was the candidacy of Jerome Hobert, who opportunistically wrote his way onto the largely orphaned Green-Rainbow party line.

That wrinkle was likely the only thing could have split the leftward vote in Holyoke and given Hobert’s almost non-existent connection with the party, it led to our speculation that he was a plant. In a presidential year, the idea of a Republican claiming Holyoke’s state rep seat could only have the slightest hope in a win by plurality.

Clearly Vega’s campaign did not take this lying down. Fully embracing the coordinated campaign of the Democratic party, Vega barnstormed much of the city. Indeed, the only precinct, he lost, according to the Republican, was that of his Republican opponent, Linda Vacon. The final total left Vacon looking like the sacrificial lamb that, in all likelihood, she would have been had it only been her and Vega running.

The results only marginally were marginally more predictable in the Sixth Hampden, a West Springfield dominated district filled out by miscellaneous Chicopee and Springfield precincts. Unlike in Holyoke, Democrat Mike Finn, the incumbent had to contend with a larger and better organized Republican base. His challenger, Lincoln Blackie ran as an independent, but the evidence suggests that the Republican machine in Westside and throughout Western Mass was backing him.

Chicopee Democrats were working their precincts for Finn and Finn’s Springfield precinct is in the heart of the city’s Irish Democratic establishment. Together, these would provide Finn with a potent firewall against any losses back home in Westside.

In the end he did not need it. Although Blackie ran a spirited campaign against Finn, he largely ignored the precincts across the river, raising the suggestion that the campaign was all along a profile-raiser. Blackie‘s work suggests the political newcomer has his eye on a non-partisan town office. That would explain his decision to run as an independent to maintain deniability about his party affiliation during the town’s elections. Alternatively, he could be pulling what Third Hampden Representative Nick Boldyga did.

In 2008, Boldyga ran against Rosemarie Sandlin as an independent. Two years later, in a three-way race, Boldyga was successful.

Boldyga’s race had seemed more competitive than it ultimately turned out to be. Although his fairly conservative platform runs counter to the Democratic legacy of the district, he clearly found a way to strike a balance between the conservative agenda he appears to support and toxicity of the Republican brand generally.

The answer may be in affability and more tried and true methods of campaigning. Boldyga seemed to connect to people easily, something he likely perfected running for Southwick’s Select Board. Not to mention, he also could easily direct voters to his young family as his motivation for his work, a classic, if almost clichéd campaign move.

Sam DiSanti, the challenger, meanwhile, tried to nationalize the election, and frankly, had good cause to do so, even if the controversies of ALEC might raise less red flags in Agawam than in Northampton. However, DiSanti seemed to fumble the issue and even let Boldyga get away with ironically calling the strategy “Washington talking points.”

Across the river in Second Hampden District, the reelection of Democratic Rep. Brian Ashe over Republican Marie Angelides, hovered just above bloodbath territory. Ashe annihilated Angelides, a Longmeadow Select Board member, capturing not only a win district-wide, but in each town, too, something he had never done before. Democrats familiar with the campaign said the sweep was a surprise.

An outcome like that in a swing district is a shocker, especially since Elizabeth Warren won none of the towns. For perspective, when Ashe ran in 2008 after incumbent Mary Rogeness retired, less than 2000 votes separated him and the Republican William Scibelli. This year Ashe outpolled Angelides by 3000 votes and that was without the overwhelmingly Democratic Springfield precinct that were in his district in 2008. Those precints also saved Ashe in 2010. 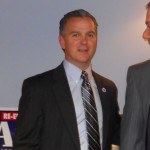 However, in 2010, 5000 less people voted. Even so, numbers like these suggest that as much as Ashe earned that victory (and he did), Angelides lost it. This could present a problem to Ashe in the future. More on that in a moment.

Finally, among rep races there are the largely non-competitive contests, all of which involved Springfield districts. In the Ninth District and Eleventh District, incumbent Democrats Sean Curran and Ben Swan easily dispatched independent challengers. Both have been perennial candidates, having run for, among other things, City Council. Beating such incumbents in a Democratic city in a presidential year is nearly impossible.

The only other rep race was that of Angelo Puppolo. The former City Council represents the city’s highest turnout ward, which incidentally also has many of the city’s few Republicans. While some Republicans probably voted for Wilbraham-Hampden School Committee Member D. John McCarthy, many more probably went far enough back with Puppolo to remember his Council days. Additionally, whatever magic Gale Candaras has had in keeping hold on the more-conservative than not Wilbraham likely shined down on Puppolo. He trounced McCarthy there, too.

The only other race of significance down ballot is the Govenor’s Council race. To put it simply, Republican Mike Franco lacked the resources to make straight Democratic ticket voters think twice about Democrat Michael Albano’s maladministration in Springfield.

Many races went uncontested and will probably continue to go as such. The First, Fourth, Seventh and Eighth Hampden districts include incumbents bolted into their seats. A true two-party (half are held by Republicans and half by Democrats) race in any of them is unlikely unless the incumbent retires. Vega is probably secure while Curran, Finn, Puppolo and Swan are probably going to see general election challenges from time to time. Most opponents will probably lack the resources and oomph to be competitive.

Not true of the Second and Third Hampden districts. Because of the Third Hampden’s heritage, Boldyga will probably be challenged again. Agawam is politically weird and its swings are hard to follow. It barely voted for Obama this year, but that does not mean the ground is fallow for Democrats–yet. Despite an apparent conservatism, Agawam and Southwick are going to elect people who build up grassroots likeability and relatability. That’s how Boldyga won and that is how Democrats could win.

In the Second Hampden, ambitious Republicans looking at the wreckage of the Angelides campaign may see an opportunity. A more popular figure might be able to succeed in pulling votes back from Ashe, especially in East Longmeadow and Hampden. Indeed, Ashe cannot count on those towns in 2014 between lower turnout and one, if not more competitive statewide races‘s down ballot effect.

In the end, though Angelides unpopularity probably drove up Ashe’s tally, it was not the margin of victory. He won that. However, the Republicans are all, but certain to come back at him in 2014 and beyond with more viable candidates. This is, after all, the district of longtime Rep Rogeness, one of Western Mass’s Republican Illuminati, and it is probably a safe bet that she did not vacate the seat just so a Democrat could hold it.