Briefings: A Day of Departures…

UPDATED 7:47PM: For clarity and accuracy.

New North Citizens Council Director Michael Denney, 63, died of a heart attack, according to the Republican.  Among the city’s preeminent neighborhood groups, the NNCC also doubled as one of the city’s main Latino advocacy organizations, in part due to the complexion of the neighborhood it serves.  Its political influence is not insignificant as it attracts visits from politicians running statewide in Massachusetts, including then-candidate Elizabeth Warren this past summer.  Denney had served as Executive Director since 2005. 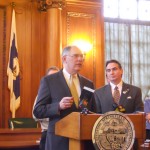 Elsewhere in Springfield, there was another changeover in City Hall.  The city’s longtime Chief Administrative and Financial Officer Lee Erdmann will resign in January after serving one three year term.  The CAFO position, established by the legislature for the city during the Control Board era, is effectively the city’s deciding authority on financial and personnel matters other than the mayor himself.  All departments’ budgets go through him and by extension his finance team and many department heads are appointed by the CAFO with the mayor’s consent.

Because of Erdmann’s position, he has been remarked by some as being the most powerful figure in City Hall, even to some extent the mayor.  Although the mayor’s political power does exceed the CAFO’s, the budget numbers go through him before submission to the the elected branches of the city.  Moreover, the CAFO must evaluate any measure taken by the elected branches with an impact on finances.

Finance Director T.J. Plante will serve as CAFO on an interim basis.  The statement from the mayor’s office included praise from Erdmann for the financial team and accolades for Ersmann from Mayor Domenic Sarno.

The legislation creating the position specifies that a seven member screening committee shall produce a slate of candidates qualified to hold the office and the mayor may then make his recommendation.  The mayor appoints four members and the School Committee, the City Council and Governor’s Office of Administration and Finance appoint one member each.

One thought on “Briefings: A Day of Departures…”