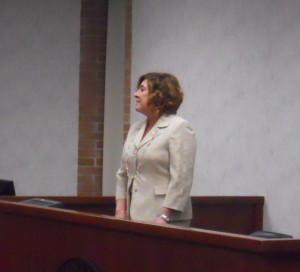 Gentile after being sworn-in (WMassP&I)

SPRINGFIELD—In a brief and modest ceremony, before a large crowd, Laura Gentile, an assistant Clerk of Courts and otherwise largely politically unknown, took the oath of office to lead the office for which she has worked for well over a decade.

Retired Judge Brian McDonald administered the oath of office for Hampden County Clerk of Courts to Gentile in a courtroom in the Blake Law Building at Western New England University, her alma mater.  Friends and family filled the area where lawyers and a jury would sit while other supporters and dignitaries filled the gallery.  A few late-coming attendees had to stand. 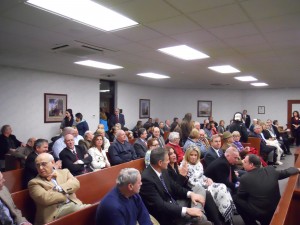 After being sworn in, Gentile paid tribute to the people that worked on her campaign and to her family.  Quoting Emily Dickinson, Gentile said “We never know what we are made of until we are called upon to rise.”  She said of her husband, Tom, that he was always on hand, although one day she caught him shaking his head in apparent frustration.  “What the hell did we get ourselves into,” she recalled saying.

She also recognized her son, T.J., an undergraduate at WNEU and her father Robert, who was unable to attend due to illness.  It was he, Gentile contended that said, “Just do it,” and not a certain ubiquitous sportswear company.  She also paid tribute to her late mother.  After Gentile told her mother that a friend’s mother adviser the friend to “marry a doctor or a lawyer.”  Gentile’s mother turned to her and said, “No, no.  Be a doctor or a lawyer.” 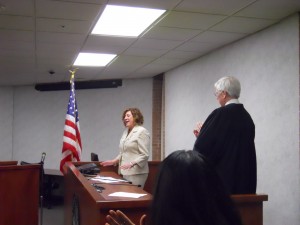 Gentile concluded by reiterating some of her campaign promises including streamlined jury service, greater use of potentially money-saving video-conferencing for more routine matters and better public access via the Internet.  In a brief interview after the ceremony, she said some of those initiatives were already being pursued.

Asked how she felt about being an elected official, she replied, “It was the jobs I wanted…not the office.”

The swearing-in capped a primary campaign for the estoeric office (there was no Republican opposition) that while energetic, turned ugly in its final days as attacks, some personal and/or conclusory, were lobbed at Gentile and Springfield at-large Councilor Tom Ashe.

One of Gentile’s opponents in the clerk’s primary race, Linda Stec DiSanti, attended the swearing-in.  Posting onto Gentile’s Facebook page later, DiSanti wished the new Clerk of Courts, “much success in your 6 year term.  I’m happy for you.”  Just before going into the Law School’s lobby packed with supporters, Gentile learned from a supporter that DiSanti was in attendance.  Upon hearing that, Gentile replied earnestly that she wished she had known as she would have recognized her one-time rival.

Most state officials, including the members of the State Senate & State House took the oath of office today including Holyoke’s new State Rep, Aaron Vega of the Fifth Hampden District.  Vega was the only freshman legislator from Western Massachusetts’ delegation to the legislature.  Hampshire County also swore-in Mary Olberding as Registrar of Deeds.

Senator-elect Elizabeth Warren and the commonwealth’s House delegation will be sworn in tomorrow at noon in Washington.  Warren will also have a swearing-in reenactment at Roxbury Community College in Boston on Saturday.