NORTHAMPTON—Three years ago United States Supreme Court, in a ruling widely derided as putting corporations on the same level as people, let loose moneyed interests, already quite powerful within the nation’s political system.  Citizens United v. FEC, became a touchstone in American jurisprudence, on part with decisions like Dred Scott before it.

However, also like Dred Scott and other controversial decisions like Roe v. Wade, the ruling has provoked opposition both among the grassroots and in Congress.  Seeking to drum up support for a constitutional amendment to void Citizens United, Rep. James McGovern, joined by Free Speech for People Executive Director John Bonifaz, held a “People’s Rights” Tour Friday with stops from Boston to Northampton.

McGovern introduced two amendments this week.  One would overturn Citizens United by defining the rights in the Constitution belong to people, not corporations or other legal contrivances.  That amendment has several Democratic cosponsors and one Republican, Walter Jones of North Carolina.  Another amendment would empower Congress and the states to pass laws that regulate spending on political campaigns, something not allowed under a 1976 Supreme Court decision, Buckley v. Valeo. 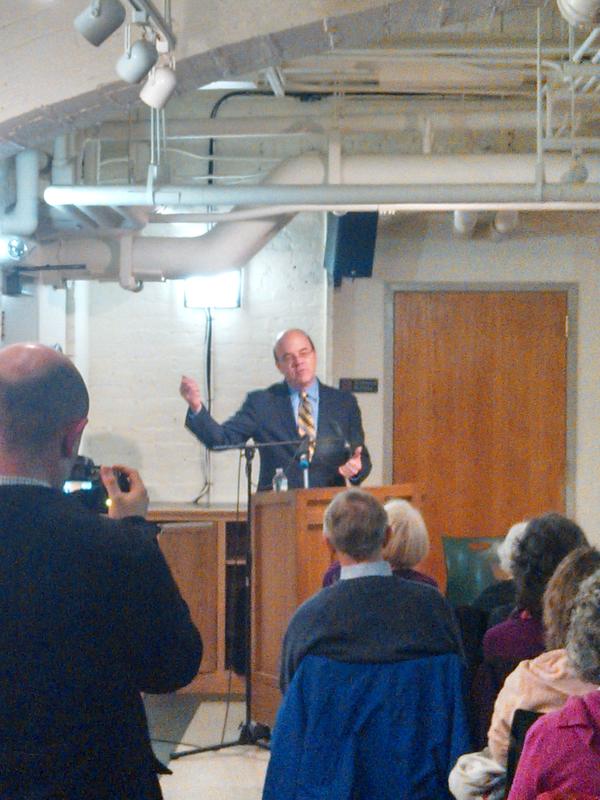 Amendments to the Constitution require a 2/3 vote in both Houses of Congress and then must be ratified by ¾ of all state legislatures and/or conventions set up by the states.

Speaking to a standing-room only crowd in the Forbes Library community room, McGovern, whose new 2nd Massachusetts district now includes Amherst and Northampton, detailed his concerns about money in politics.  Specifically, McGovern outlined his own experience where members of both parties in both the House and Senate spend too many hours “dialing for dollars” either for their own campaigns or their party and body’s respective campaign committee.

Money is not everything, McGovern admitted, recalling his first campaign in 1996 against Republican Representative Peter Blute.  McGovern said he was vastly outspent and expected to lose in the then-swingy 3rd District.  McGovern said he could only afford television in the last week of the campaign carrying the slogan, “if you wouldn’t vote for Newt, why would you vote for Blute,” a reference to then-House Speaker Newt Gingrich.  McGovern, an unabashed liberal, won with 53% of the vote and has faced only nominal opposition since.

However, under Citizens United, McGovern explained, the situation has become worse, with corporations or wealth individuals able to respond to politicians individual votes, with massive sums of money, but also anonymously.

Even without the anonymous and massive donations, often taking the form of SuperPAC’s, McGovern said sums in campaigns are getting to be too high.  He noted, specifically, Massachusetts’s Senate race and the Florida 18th Congressional District between incumbent Tea Party darling Allen West and eventually winner Democrat Patrick Murphy.  Both races were the most expensive for their respective house of Congress in 2012.

The US Supreme Court Building (wikipedia)

Bonifaz traced the history of Citizens United back to Lewis Powell.  Before Powell became a Supreme Court justice, Bonifaz explained, he was at the forefront of a movement to give corporations the same rights as people.  This effort was undertaken in order for corporations to begin combating environmental laws and other regulations that arose in the 1960‘s and 70‘s.

Supporters of the Citizens United decision differ, saying that money for campaigns means  more speech.  Any attempt to restrict that money, is, in effect, limiting speech.  However, during a symposium last year at the University of Connecticut, former Wisconsin Senator Russell Feingold disputed that notion.  McCain-Feingold, legislation he got passed with Senator John McCain, was at the center of the Citizens United case.  For the few years it operated uninhibited, Feingold found small dollar donor participation in campaigns to go up along with voter interest and participation.

Both Bonifaz and McGovern were realistic about the amendments’ prospects.  Some amendments to the Constitution took decades to pass.  Others, like lowering the voting age to eighteen, took only two years.  Posed with the question of alternative means to amend the Constitution existed, Bonifaz said alternate options do exist. However, he added such a methods could invite totally irrelevant Constitutional changes as well.

Both Bonifaz and McGovern also urged the crowd to contact friends and family in other states to in turn contact their members of Congress.  One member of the audience asked if President Barack Obama would mention it in the State of Union.  Both agreed that he should and that the grassroots should lobby Obama to do so.

Local grassroots activity on the issue has been fairly successful.  Resolutions in support of overturning Citizens United have passed on Beacon Hill and local City Councils, including Northampton and Springfield.

During a brief interview with WMassP&I both McGovern and Bonifaz explained in more detail what the amendments would do and how the rights of people would be protected in the process.

The crowd at Forbes Library (WMassP&I)

McGovern, citing a New York Times Editorial, disputed the idea that reversing Citizens United could jeopardize the power of the press, something Supreme Court Justice Samuel Alito has suggested.  “That is a false premise,” he said of Alito‘s thesis on the press and Citizens United.  Alito was part of the 5-4 majority that handed down the case.

Bonifaz noted, as the Times did, that the rights as a publisher, writer, etc, belong to the people that work within the media, not the media corporation for which they work.  Similarly, Bonifaz dismissed notions that rights that corporations’ validly possess would wholly be voided.  Property rights of a corporation “are actual persons’ rights” he said.  For example, he explained, a corporations’ human shareholders’ rights would be violated if the company’s right to just compensation for property taken by eminent domain was not observed by the government.

Asked about Republican support, especially in light of last year’s Republican primary where Mitt Romney used SuperPAC’s to full effect, McGovern said “Republicans are just as frustrated as Democrats.”  He noted the support of Cong. Jones, one of his amendment’s cosponsors.  McGovern also cited Sen. McCain, a champion of campaign finance reform in years passed, who has warned a scandal due to Citizens United is inevitable.

Bonifaz added that there was an appetite in many states for reform.  He pointed to Montana, whose own tough campaign finance laws had been summarily invalidated by the Supreme Court last year. Nevertheless, nearly 75% of Montanans rejected the Supreme Court’s position and added a amendment to the state constitution disavowing corporations rights as equal to natural persons, specifically in elections.  By comparison, Mitt Romney carried the state with 55% of the vote, confirming that the ballot initiative had bipartisan support within the state.

For McGovern, the problem runs much deeper than just the power of the corporations themselves.  It goes back to all the time senators and representatives spend in cubicles raising money.  “We were sent to Washington to work on issues,” and McGovern says he and his colleagues could, “if we didn’t have these decisions.”  As it stands, it is “impossible to do anything now,” he said.