Debates Over, Torch Passed to Conant… 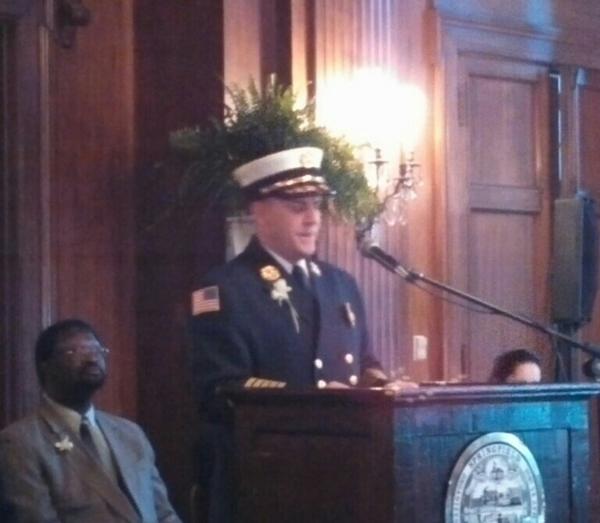 SPRINGFIELD—Surrounded by city firefighters, family and colleagues from across the region, Joseph Conant was formally installed as Springfield Fire Commissioner, after a year of holding the job on an acting basis.  Conant, 46, takes full and formal charge of the Fire Department during another financially difficult time for the city and after a decade of difficult cuts to the department.

Conant received the appointment only after the city ordinance establishing the office was changed to no longer require a master’s degree.  The Council made the change on January 14 and the mayor has since signed the ordinance.  The road to the ordinance’s passage faced some obstacles and only came after weeks of wrangling between the Council and the mayor’s office. 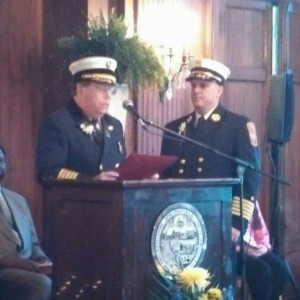 The event held in Symphony Hall‘s opulent Mahogany Room was, according to Conant, organized by Spirit of Springfield Director Judith Matt and the Fire Department’s Public Information Officer, Dennis Leger.  Anthony Cignoli, a political consultant in the city, served as emcee, at the request of Matt & Leger and has emceed numerous such civic events including Cassanelli’s retirement.

In attendance were State Fire Marshal Stephen Coan, who symbolically delegated the commissioner authority to Conant.  Mayor Domenic Sarno, also lavished praise on Conant.  The mayor recounted his first introduction to the newly minted commission when both responded to a fire at the Indian Orchard Mills on the Chicopee River in 2010.

Noting the criticism he took for not ordering a national search, Sarno said in Conant, Springfield had “a proven commodity right here.”  At-large Councilor Tom Ashe, who along with fellow at-large Councilor Kateri Walsh attended the ceremoney echoed Sarno’s sentiment in a statement to WMassP&I.

Conant, Ashe said, “has the capacity to lead the fire department,” “understands all the personnel and budgetary details and obviously has the overwhelming support of the rank and file.”  Ashe is also the Chair of the Council’s Committee on Public Health & Safety.

That “proven commodity” Sarno mentioned may be more needed than ever.  The grandeur of the Mahogany Room and the century-old Symphony Hall, which harken back to flusher times for the city, belie the city’s precarious financial situation.  Under the Finance Control Board, the Fire Department took the city’s crisis in the throat in relative contrast to the police. It has lost more than a hundred funded firefighter positions over the last ten years.

As bad as cuts have been, the blow at the start of the recession had been softened by stimulus dollars form the American Recovery and Reinvestment Act of 2009.  Cuts continue however, driven by falling property tax receipts and local aid.  A 10% cut across the board is believed to be headed to all departments for the fiscal year starting July 1st. 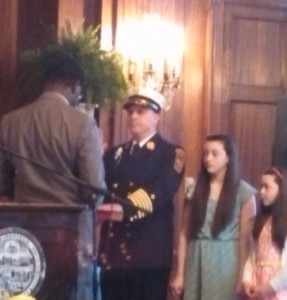 The Fire Department has performed well, despite its increasingly lighter footprint in the city.  In 2008, right in  the midst of the department’s deepest cuts, the city recorded a full year with zero fire-related deaths, an impressive feat for a city of Springfield‘s size.

Some of these challenges appeared to be on Conant’s mind as he addressed the audience.  He mentioned some of the actions already undertaken by the department to save money including changes in procedures to preserve the life of firefighting equipment.  Specifically, some lower priority calls may require the dispatch of smaller vehicles rather than the Fire Department’s largest assets.

Reflecting on the fraternity and camaraderie he has experienced during his time in the Fire Department, Conant said, “You don’t have a job, you bring a career.  You don’t have coworkers, you have an extended family.”  Conant also thanked his colleagues, mentors and his family.  He mentioned his wife, children and parents.  Conant noted that although his late father was not there, his father’s firefighter helmet was.

The ceremony concluded after Conant’s remarks and a prayer from the Fire Department chaplain Fr. Gary Dailey.  The opening prayer had been offered by Rev. Zachard Slater, while Vanessa Ford, a mainstay of Springfield ceremonies, sang the national anthem.