In Farewell, Kerry Reflects on the Senate, and the Humanity Behind it…

To applause today and a resounding confirmation vote to be Secretary of State yesterday, Senator John Kerry marked his exit from the United States Senate.  After a distinguished career in the Senate, Kerry moves on to be the nation’s top diplomat, a post which many have remarked he was born to hold.

Speaking for the last time as a US Senator, Kerry reflected on his career in the senate, the institution itself, the people who made it possible and nation he has served through war, protest and finally public service.  The speech was an elegant and appropriate capstone for Kerry, who, like his longtime seatmate Edward Kennedy, made a run for higher office, but nevertheless fully invested himself in the institution.

Kerry was confirmed on a 94-3 vote.  The No votes came from both of Texas’ senators and Oklahoma’s James Inhofe.  Inhofe’s vote is not all together surprising as Kerry has vowed to take on climate change in the State Department.  Texas’ freshman senator, Ted Cruz, who never served in military, made his speciously informed distaste of Kerry’s abundantly clear last week. Texas’ other senator, John Cornyn, a member of Republican leadership, apparently cast the vote in an apparent act of political cowardice, fearing a primary in his next election.

Kerry’s nomination as Secretary of State led to a great deal of shaking up in the Massachusetts political world, but also in the lives of individuals, namely Kerry’s Senate staff.  Under Massachusetts law, Kerry’s replacement will be filled temporarily by an interim gubernatorial appointment.  A replacement who will serve out the term until 2014 will be picked in a special election scheduled for June 25. 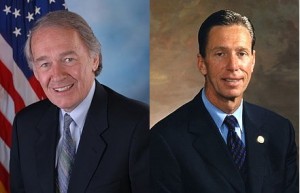 Congressman Ed Markey of Malden is the only announced candidate, but Congressman Stephen Lynch will announce his own candidacy tomorrow starting at O’Brien’s corner in Springfield.  Former Republican Senator Scott Brown is either strongly leaning toward running…or not, depending on which media report the Brown camp/Massachusetts Republicans are planting on any given day.  Gov. Deval Patrick announced Mo Cowan, his former Chief of Staff, will be the interim appointment.

Kerry came to the Senate as an outsider of sorts in 1984.  While he had been Lt. Governor before, Kerry’s journey into public life took a path through activism against Vietnam, after serving there with distinction.  He noted in his farewell address, as many had before, that his life had come full circle.  Before last week’s confirmation hearing, the last time Kerry testified before the Senate Foreign Relations Committee, was forty years ago testifying against the Vietnam War.

When he and others first came to Washington, however, they were not warmly welcomed.  But some senators, Kennedy and Hubert Humphrey, Kerry said, met with the protests, “I saw first-hand that our political process works only when leaders are willing to listen — to each other, but also to everyone else.”

Choking up at times, however, it was clear, both from context and the words of his speech that people made the Senate possible.  He recognized his colleagues, the support staff for the senate as a whole, including cloakroom and elevator attendants, but also his staff.

Work on Capitol Hill is known to come with a great deal of turnover.  However, the closure of Kerry’s office has some—albeit far less macabre—parallels to Kennedy‘s death in 2009.  When Kerry’s resignation takes effect, his office staff will be transferred to the Secretary of the Senate.  There, they will continue packing up the office and finishing constituent casework.

Since President Barack Obama announced that he would be appointing Kerry to the State Department, several staffers have left, but the office is hardly working on a skeleton crew, sources say.  A Kerry spokesman said, “Many will continue to serve Massachusetts,” possibly for Cowan, “others are already pursuing opportunities to apply their highly specialized policy expertise, and some will choose to follow Sen. Kerry to the State Department.” US State Department Building (via wikipedia)

Whatever they want to do, Kerry will have their backs.  On the day Obama nominated him, Kerry held a staff meeting and said, according to the Kerry spokesman, “he has the best staff in the entire senate,” words he echoed in today’s farewell address.  Since the December nomination, Kerry has been working the phones to help staffers, who will not be joining him at State find jobs best suited for them.

“Whatever they choose, Sen. Kerry is committed to helping them find the best path forward for them and their families after all they’ve done for him and for Massachusetts,” the spokesman said.

On the floor of the Senate, Kerry did not name all of his staff, but he did single out five staffers from over the years who had died.  Two of those, Louise Etheridge and Gene Heller, were senior citizen volunteers, “who opened our mail for over a decade, not paid, they just did this out of their love for country.”

Kerry’s office, both staff and interns, has left a legacy in both Washington and Massachusetts.  Alums of Kerry’s office include, to name only a few, the President’s outgoing chief speechwriter Jon Favreau and Warren’s current State Director, Roger Lau. Kerry noted the giants of the Senate, both of more modern times, John and Edward Kennedy, Edward Brooke, Lyndon Johnson, and from the earlier half of the nineteenth century like Daniel Webster and Henry Clay.  At the same time, he also noted the important shift in the body to more accurately represent America, including more women senators and its first openly gay senator.

However, he also worried aloud about the hurdles the people who elect the senate, appear to face in exercising the rights hard fought in the Senate itself.  Looking ahead to his new post, Kerry added, “for a country that can and should extol the virtues of democracy around the world, our job is made more difficult when…so many struggle still to exercise that right here at home.”

On that same point, Kerry highlighted the “corrupting influence” of money in politics, which brings access to those who have the cash and sets an agenda, possibly to their benefit.  This influence, “is steadily silencing the voice of the vast majority of Americans who have a much harder time competing, or who can’t compete at all,” Kerry said. John Kerry before the Sen. Foreign Relations Committee Hearing on his confirmation as Secretary of State (via Washington Post/Linda Davidson)

The full speech contains too many poignant moments and critical points to list them all.  Still, at a time in which, as Kerry noted, the chamber is seldom filled except when it acts as a “departure lounge” and therefore fewer great speeches define the “world’s greatest deliberative body,” this one will likely find a prominent place in the history of the Senate.

Less than forty-eight hours remain of Kerry’s tenure in the Senate, but tomorrow he will spend many of them in his home state, thanking the people that sent him to Washington.  Kerry will stop in Springfield at the YWCA in Springfield at 10 AM before making another stop in Worcester.  His tour will conclude at Faneuil Hall in Boston, a nexus of a great deal of the Commonwealth’s history and  a spot where Kerry has made many of speeches over the years.  There, another chapter of history will conclude, while another one begins.