Our One Hundredth: The Lynchpins of the Race…

UPDATED 2/5/2013 1:35PM: For accuracy on Cong. Lynch’s position on abortion. A previous version of this post linked to articles, since unlinked, that had yet to reflect clarification on Lynch’s position. 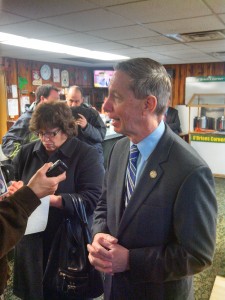 As South Boston Congressman Stephen Lynch pressed the flesh with area pols, gabbed with Western Massachusetts reporters and greeted diners at O’Brien’s Corner, it is possible that he had no idea how the race would change in the next few hours let alone days. Last Thursday when he kicked off his campaign in Springfield in the remains of the city‘s industrial heart, Lynch pitched himself as somebody who could get Scott Brown Democrats back.

For Democrats skittish about Brown’s inexplicable appeal, particularly to unionized workers, despite offering nothing substantive to them, Lynch’s advertised moderate label could be welcome. Not to mention, Lynch, a former iron worker and union attorney, can call upon a phalanx of unions to drive him to victory in the general. Were he to convince Democrats to take his bet, while stoking the left’s fear of a Brown redux, he might have a path to the other side of the US Capitol.

Those plans imploded the day after Lynch’s big announcement when Brown himself announced that he would not be a candidate. This cut both ways for Lynch in his primary contest with Congressman Ed Markey of Malden, who has a financial and endorsement head start. Lynch lost a line in his stump speech, but also had to contend with the fact that the more liberal primary electorate would probably be making the final decision, as evidenced by his tone on abortion.  As the Republican field became a wild card, some of the names mentioned could have endangered  Lynch.

Shortly after Brown declined to run, former Massachusetts Senate Minority Leader Richard Tisei announced he would consider running. This could have been a disaster for Lynch, who has been pilloried for his stance on gay rights, even though his position, like many Democrats, has evolved considerably. Tisei, who was gay, might have muddied the waters against Lynch just enough among some voting groups to win, especially if liberal enthusiasm flagged.

Then over the weekend and into today, Lynch caught a couple of breaks. Tisei announced he would not run. Yesterday, Secretary of the Commonwealth William Galvin announced a special election, made possible by the resignation of Lynch’s successor in the State Senate, would have its primary on the same day as the special election’s primary. That senate seat is based in South Boston and Dorchester and the battle brewing there could reinforce turnout among Lynch’s base.

However, for all of those breaks, Lynch still has a daunting road ahead. Markey has considerably more money than Lynch, which, in turn will facilitate better fundraising—in theory. The party’s activist left appears to be lining up behind Markey and big names from John Kerry to Martha Coakley are backing the Malden Democrat. Already the left, particularly women’s groups, are criticizing Lynch’s stance on women’s reproductive health.

This race also carries some risk for Lynch as well. The South Boston Democrat had about $800,000 in his campaign account as of December 31, or about a quarter of what Markey had. If this race proves to be the longshot the prognosticators are calling it, Lynch could be vulnerable to a Democratic party challenge of his own. An upstart from any of the communities he represents could marshal a primary against Lynch, who may not have the financial resources needed to properly fight back.

Like many underdogs, Lynch has gone after Markey. Lynch has called him a “creature of Washington” while complaining that Democrats elected to the Senate are not moderate enough. Instead, he told reporters and diners at O’Brien’s Corner, what the Senate needed was somebody standing up for working people. In recommending himself, Lynch said he knows what its like in the unemployment line and that he voted against TARP.

Even as he jabbed at Markey, however, Lynch is walking a fine line. Among the lessons of last year’s senate race between Elizabeth Warren and Brown was that excessive negativity can boomerang to disastrous effect. Speaking to Northeastern Public Radio’s Paul Tuthill, Lynch called Markey “a friend.” Speaking to reporters Lynch reiterated his support for the People’s Pledge, which would discourage third party groups from carpet-bombing the airwaves. He said he did not want to see Markey, “unfairly attacked.”

On issues, Lynch sought to distance himself from the rap of being the delegation’s most conservative member. While his explanation of his vote against the Affordable Care Act (and his subsequent yes on the law’s second component passed days later) is muddled to say the least, he has claimed that his voting record is not out of step with the commonwealth.

Lynch has backed President Obama’s push to reform the nation’s gun laws, as Markey did. Both men’s scores from the Sierra Club and the League of Conservation Voters are similar, although the later has formally endorsed Markey.

Lynch has sought to minimize the daylight between himself and Markey on women’s reproductive rights, too. He has noted his support for Planned Parenthood and defining his opposition to abortion as best carried out by minimizing unplanned pregnancies. While his Planned Parenthood stance may be consistent, his presentation on the issue of abortion has shifted.  Certainly abortion rights groups like NARAL Pro-Choice Massachusetts are not convinced.  The Lynch campaign is quick to deny that the candidate has flip-flopped, insisting instead that he has always had a nuanced position.  To that end, he opposed federal funding of abortion generally, while steering clear of bills like the No Taxpayer Funding for Abortion Act, which infamously redefined rape.

Of course this works both ways. While some in unions decry Markey’s record on some issues important to labor, both share similar scores from the AFL-CIO, going back several years. Perhaps Lynch’s argument ultimately comes down to tone as much as substance in differentiating himself (at least in a good way) from Markey. Instead the focus may be which issue gets the highest priority from voters.

Recent events have made relevant the probable marquee issues for both candidates, Markey and the environment versus Lynch and Labor. Superstorm Sandy brought climate to the fore and the D.C. Appeals Court ruling on recess appointments to the National Labor Relations Board may have immediate impact on labor. In a Democratic primary, Lynch need not worry that union and non-union worker issues be bracketed separately.

The Home of the Court of the Appeals for the DC Circuit, which  issued a ruling adverse to labor and the presidential recess appointment. (via wikipedia)

While Lynch will have a great deal of labor support, a central question will be how will he improve workers’ situation beyond recitation of his biography. Through a spokesman, Lynch told WMassP&I he would bring to bear his experience practicing before the Board and work off relationships to ensure the Board is working. “Congressman Lynch is confident in his ability to bring Democrats and Republicans closer together on appointments to the NLRB and other positions that require Senate confirmation,” the campaign spokesman said.

While declared supporters of neither Lynch nor Markey are likely to switch sides after the Republican field’s epic collapse, Brown’s withdrawal from the race has seemed to have an effect. Perhaps the tone of the race might shift to a more honest consideration of the issues. It is too early to tell whether or not Lynch may back off his more biting criticisms of Markey. However, Lynch’s opponents within the party appear a touch less venomous than before. Even Blue Mass Group, whose posters lean largely, though not universally toward Markey, appears to have softened its tone on Lynch across the board.

As Lynch milled around O’Brien’s Corner, it was obvious he had a gift for retail politics, sitting down with guests and discussing issues with them. At the same time, these people alone are not the ones Lynch needs to convince. Not to downplay the average voter, but aside from the politicians and union officials present, few of those present were modern-day activists, media reports to the contrary notwithstanding. With Democrats less fearful of a raucous primary, Lynch may get his chance to reach out to those activists and voters in the debates…if he promises, as Markey has, to keep the campaign positive and substantively issue-oriented.