SPRINGFIELD—Among the powers of the City Council, few bring about more unpredictable results than the exercise of its permit-granting authority.  For whatever reason, the special-permit granting authority of the city is the elected Council, which jealously guards that power.  Rarely, however, does a single item so strain passions strain and balkanize the Council as the permits presented by Lamar Advertising’s Patrick Keough did last night.

As with most measures before the Council when it acts as the city’s permit granting authority, a two-thirds vote or nine affirmative Council votes are needed for approval.  Failure to reach nine votes kills the motion for two years under state law.

Most of the agenda consisted of fairly routine permits that included the traditional accolades for business owners in the city.  The McDonalds on Allen Street has plans to demolish the building and build a new facility with pedestrian access and two drive through lanes, which would require a new permit.

The action came on a proposal to erect digital billboards at two owned by Lamar Advertising, a national company that owns many of the billboards in the city.  Digital billboards have been a topic of discussion for a long time in the city, but broader amendment of the city’s zoning ordinance to accommodate them have not been successful.   Because the city never passed such an ordinance, the billboards require a special permit.  Complicating matters further, there remain rampant questions about whether or not the city is properly assessing the existing billboards.

Representatives of Lamar Advertising, who own the billboards themselves, explained that the project would probably yield about 3-4 times the advertising revenue the static billboards currently yield.  They would not hazard a guess as to how much more beyond that.  A true assessment of the billboards‘ digital display value is difficult because such nearby billboards in cities like Hartford are in more expensive media markets than Springfield.

Ward 2 Councilor Mike Fenton, seen as a supporter of digital billboards, asked about the orientation of the billboards.  A one-sided billboard is planned for Liberty Street, while a two-sided one is slated for the Balise site.  It was in the course of this conversation that Keough said that Penn National had optioned the land and Lamar would relocate the billboard if Hollywood Springfield won the Western Massachusetts resort license.

Noting there were also technological changes that had not been discussed, and echoing concerns raised by Ward 6 Councilor Ken Shea, Fenton moved to have the billboard permits sent to committee, seconded by Ward 7 Councilor Tim Allen.

But Williams’ support was by far the strongest, even as he sometimes struggled to find the words.  Not quite getting his Hamlet right, he declared, “something is fishy in Denmark” with councilors getting involved in the private transaction between Lamar and Penn National.   He suggested that sending the item to committee would be useless because it is not in their jurisdiction. As to the tax assessment issue, he insisted that that was the province of City Assessor Richard Allen, not the Council.

Fenton countered that the Council gets involved in such matters all the time, particularly where non-profits are concerned.  Williams stammered back that as tax-exempt entities the comparison was wrong.

A voice vote was called and at-large Councilor and Council President Jimmy Ferrera gaveled the motion as passed despite a loud chorus of no‘s.  Walsh challenged Ferrera’s decision, but he resisted.  During a two minute recess, councilors argued over the body’s rules.  Ferrera appeared to assert his ruling stood, but a recorded vote took place anyway. 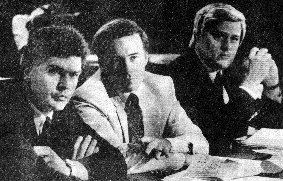 The reversal by Williams and others, and perhaps even Ferrera’s insistence that the item go to committee could signal that the item lacked the necessary nine votes.  If the imbroglio that erupted over this item were not enough, Patrick Keough, is the brother of former City Council President and ex-con Francis “Frank” Keough. Francis went to federal prison a decade ago for corruption involving the Worthington Street-based Friends of the Homeless.

Francis Keough, since released, has no public role in the Lamar deal, but his dealings have had an impact on his brother before.  The Union-News reported twenty-one years ago today that while Francis was under investigation for tax fraud, Patrick had been suspended with pay from a job with the attorney general’s office the month before.  An AG spokesman told the paper Patrick’s suspension occurred,  “to avoid any appearance of conflict of interest.“

Francis would be indicted the following April.  While the charges were pending, Patrick‘s then-job with the city came under scrutiny in 1993 in a February 13 Union-News article.  While Patrick Keough’s name would come up occasionally thereafter, brother Francis would garner greater press attention in succeeding years.