This post was originally published on 3/17/13 10:27. Its time stamp has been changed to promote it to the top of the site. 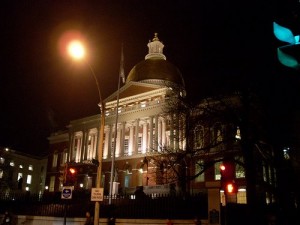 Last Monday, Sunshine Week took some Massachusetts legislators by surprise when they discovered Massachusetts had received a failing grade for its legislative website.  At first, it appeared Rhode Island, too, had gotten an “F,” but a revision ratcheted the Ocean State up to a “D” leaving Massachusetts the only New England State wearing the dunce cap.

The Sunlight Foundation’s Open States project, which graded legislative websites, rated on a scale of A-F based on a number of factors like promptness of updates, completeness of information, machine readability (that is whether or not a search engine can search it) and online access to roll call votes.

Of the various metrics the Sunlight Foundation used, the only one in which the Massachusetts General Court excelled was timeliness of updates. This may be a reference to the legislature’s bill tracking system, which while complicated, usually keeps up with bill activity. 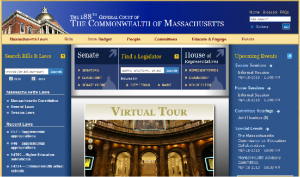 A screenshot of the Mass. Gen. Court’s home page (malegislature.gov)

The news was greeted with relative shock by legislators who had felt that the commonwealth had made progress in the digital realm in recent years.  Indeed, Massachusetts general web portal, mass.gov, on which most state agencies are hosted, has improved in recent years.  The legislative website itself has been recently redesigned and is optimized for mobile devices.

However, the website does have some pretty inescapable failings which the Foundation picked up on, particularly the poor access to roll call votes on the floor of either chamber.  House votes can be found, but require cross referencing the dates of passage reported on a particular bill against the House journal.  From there a vote number can be recovered and entered into a database which displays a PDF of the vote.

The Senate has no such system at all.  A Boston correspondent for a Springfield media outlet speaking on background said statehouse reporters typically must look up votes in the books that detail the Senate’s activities.

Legislators criticized the Foundation’s critique for resting heavily on its own preference of site software and document formatting.  Going through the aspects of the foundation’s ratings, some of the poor marks for the commonwealth, including reliability of the site are nearly impossible to independently verify.  Concerns about the foundation’s software and formatting critiques are not invalid, but the nature of how data is retained on the website does limit users of search engines like Google from finding bills and other information except through the website directly.

Senator Gale Candaras, whose district includes parts of the Springfield and communities south and east of the city, found the rankings perplexing in light of the accolades that the state’s websites has received.  However, she also said since the Foundation’s report, she has gotten assurance from the Senate clerk that votes on the Senate floor would become available online, possibly by May.

Holyoke Rep Aaron Vega called the report “a little bit of a blow.”  Like Candaras, he was skeptical of the Sunlight Foundation’s methods, but agreed that there was a need for some change.  He noted that there were few bills buzzing around the legislature to improve the website.  Vega, a freshman rep, said there is “a general feeling to have the voting records available” including on committees.

Committee votes, like the Senate‘s are impossible to find online unless reported by a media outlet.  Vega indicated that there were also efforts to improve access to committee votes, but some legislators feared that missing a committee vote on occasion, due to illness for example, could expose them to charges of shirking their jobs.

During his campaign last year, US Senator Christopher Murphy of Connecticut endured such criticism. In fact, his voting record was impeccable, but he, like most legislators did not attend every committee meeting since work is not always done at every meeting.

Incidentally, Connecticut scored one of the Sunlight foundation’s few A’s.  The Connecticut General Assembly’s website is extensive and includes votes in committees, including amendments and bill changes.  Individual bills have links to documents that report vote tallies from both committees and from each chamber.  Numerous reports, analyses and versions of bills produced by staff are also available in a comprehensive database. 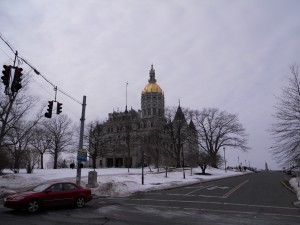 This large database with easily retrieved reports, testimony and myriad other data about bills is likely part of the reason Connecticut scored so high.  Staff ask that testimony be submitted electronically where possible and scan in those that are not as just one example.  Massachusetts simply does not manage its legislative process the same way, limiting what would be available even if such a database existed in the commonwealth.

Additionally, the official Connecticut legislative website does not host individual member pages.  Rather official pages appear to be maintained by the Democratic and Republican caucuses in each chamber.  Reps and senators also maintain their own social media presence entirely under their control. 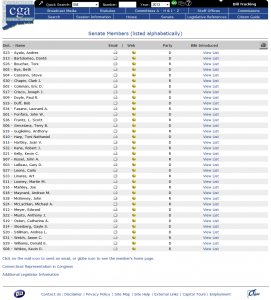 This Screenshot of the page listing CT’ State Senators only links to their pages. Individual senators’ pages are hosted elsewhere. (www.cga.ct.gov)

By comparison in Massachusetts, all legislators’ pages on the legislature’s website are largely limited to office information, district maps and filed bills.  Many, though not all, reps and senators either establish specifically legislative websites or use their campaign ones to control their online presences.  Like district offices, however, the cost of maintaining these domains comes out of their campaign accounts.

For example, Pittsfield-based Senator Benjamin Downing operates separate campaign and official websites.  Springfield’s other Senator, James Welch, opts to use one site for both.  Some may opt to use social media to fill in the gaps, like Rep. Cheryl Coakley-Rivera has no website, but does maintain a relatively new Facebook page.  Vega has created a Facebook page named after this district, “The Fifth Hampden,” for official updates and to engage constituents.  Candaras has a website, but she, too, appears to use her Facebook page more for engagement and updates.  Downing and Welch also use social media extensively and apparently without much or any staff intervention.  Rep. Ben Swan has personal Facebook page to which non-friends can subscribe, but it does not appear to conduct much legislative business.  Still others like Rep. Sean Curran have zero digital presence.

But Connecticut’s legislature is also difficult to compare to Massachusetts fully.  The Connecticut General Assembly only operates part-times and has a vast and largely non-partisan support staff to assist it.  Individuals reps and senators have small, if any staff.  Committees are staffed by partisan and non-partisan clerks, whose employment is largely not determined by the committee chairs.

Dais of the Massachusetts House of Representatives (via wikipedia)

Massachusetts, by comparison is a full-time legislature.  Every Massachusetts rep has at least one aide and senators have multiple people on staff.  Legislation is often written by partisan staff, rather than a neutral expert on a subject as in Connecticut.  Committee staff can change along with chairman and not at the direction of any general legislative body.

Potentially correcting any of this could cost the commonwealth a considerable amount of money.  When asked whether or not previous votes could go online, Candaras said she did not know.  She said that this was ultimately a data management problem and digitizing past votes could quickly become expensive, especially for an organization the size of the General Court.

That cost might explain some of the commonwealth’s other failings.  As the Sunlight Foundation’s report noted, no bill information is available prior to 2009 unless it was passed into law.  The archive of passed legislation is quite extensive, although a law’s history as it wound its way through the legislature would be as unavailable as un-passed legislation. Prospectively retaining that information and more could get pricey.  Retrospectively, even going back a decade or so, the price could be many times higher. 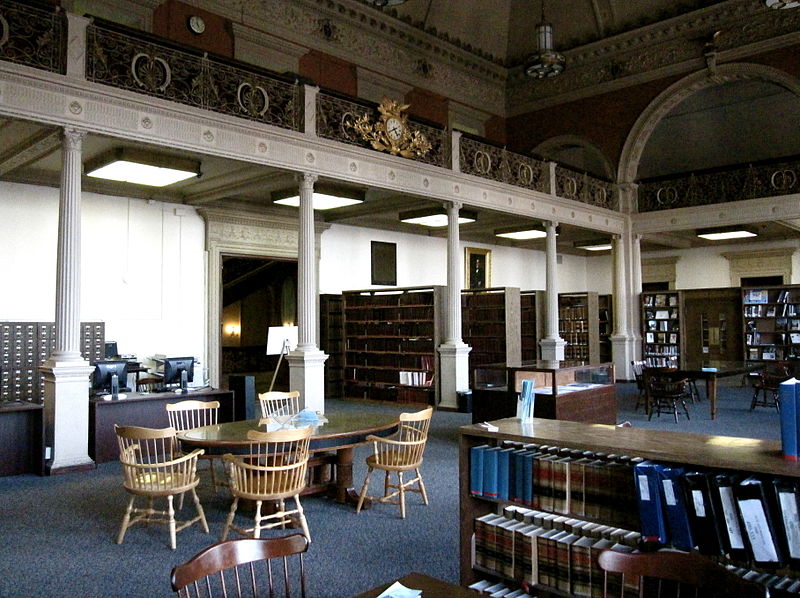 A 2010 view of the State Library in the State House, where votes can ostensibly be found. (via wikipedia)

The Sunshine Report came at a time when broader aspects of Massachusetts government are coming under scrutiny.  A report on Masslive noted that Governor Deval Patrick recently said that while he generally complies, he is not subject to the commonwealth’s public records law.  The governor’s exemption came about as the result of a court opinion, but the legislature is explicitly exempt by statute.

States vary on the level of their inclusiveness, but any change to include the governor or the legislature would require both to agree.  A public referendum is also a possibility.  As with the openness of the legislative process, however, such issues could easily become fraught with cost concerns.  Nevertheless, at a time when public confidence in government is at a low ebb and financing for critical investments need public support, it may behoove elected officials to step a bit further into the light of day and show they have nothing to hide.