Proving that the Probation Scandal remains an onion with many layers, the Justice Department has issued a fresh indictment of John O’Brien, the former Probation Commissioner and two of his aides to include counts of bribing the leaders of the legislature.  Named by position, but not by name, the indictment alleges that O’Brien bribed both multiple times The Boston Globe reported today.  The new indictment supersedes the one from March 2012.

The Probation Department scandal erupted after a lengthy investigation and series by The Boston Globe, which uncovered a rigged system of patronage in which legislators got jobs for campaign contributors and friends.  Probation officials allegedly set aside jobs for just this purpose, but also to assist their own friends and family.

The Globe report was followed up by a report ordered by the Chief Justice of the Supreme Judicial Report, which laid bare the extent of the operation.

From the Globe today on the new indictment:

“The 56-page indictment expands the racketeering charges originally brought against O’Brien, Tavares, and Burke in March of last year. The original charges accused the three of overseeing a hiring system that conducted thousands of sham job interviews to conceal the fact that the positions were reserved for friends, relatives, and supporters of politicians and court officials whether they were qualified or not.

The grand jury investigating the probation scandal has heard witnesses for more than two years after a Boston Globe Spotlight report on the rampant favoritism. It was unclear Wednesday whether the new charges are the final charges to be brought in the case.

The new indictment describes many additional instances of bribes in the form of jobs that O’Brien allegedly gave to candidates recommended by lawmakers, but the hirings took place so long ago they could not be charged separately.

DeLeo, Senate President Therese Murray, and the nearly two dozen unnamed legislators in the indictment have not been charged, but the indictment does suggest that O’Brien’s actions appear timed to help DeLeo win the 2009 contest to be House Speaker.  At the time DeLeo was Chair of Ways and Means and is referred to as such in the indictment for events that occurred when he held that position. 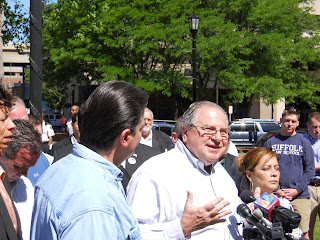 Speaker DeLeo speaking in Springfield after the 2011 tornado (WMassP&I)

Last year the Globe reported that while DeLeo claimed to not be a subject of the investigation, hires connected to him had become a bigger focus of the feds.  Moreover, legislators worried off the record that if they installed DeLeo for another term, they would face the embarrassment of his resignation soon after as happened with Sal DiMasi in 2009.

The scandal has cast a pall over Beacon Hill since the Globe report in 2010.  A central figure in the scandal was Ludlow Representative Thomas Petrolati who, while forced to relinquish leadership positions, has like all legislators not be charged.  Dubbed the King of Patronage he was linked to dozens of Probation employees particularly in Western Mass.

Petrolati’s wife employment within the department has also been scrutinized with some saying she had no qualification for the job she received.  While not directly mentioned, the couple is ostensibly alluded to in O’Brien’s indictment as “State Representative 5” and “K.P.”  Some press accounts point to Petrolati as  one of the targets of the investigation.

At the time of the Globe report, Springfield at-large Councilor Jimmy Ferrera was the sole currently serving elected official in the commonwealth whose position had come under scrutiny by the paper.  At the time the connection was explored by WMassP&I, federal prosecutors did not comment and it remains unclear if any jobholders connected to the scandal face a risk of prosecution.

The indictment also mentions the Office of Community Corrections where Ferrera works.  However, like the old indictment from last year, there is no indication that Ferrera’s employment is the basis for any of the counts against O’Brien or his codefendants.

According to the Globe and Associated Press, both DeLeo and Murray deny any wrongdoing while the rest of legislature waits to see if a trickle or downpour of dropping shoes are still to come.