SPRINGFIELD—A rather short agenda made for the rare short meeting Monday night as the Springfield City Council took up a few housekeeping items, albeit ones that will have a notable impact.

The items were mostly financial transfers within departments and a few grant acceptances.  At-large Councilor Tim Rooke was absent.

Health and Human Services chief Helen Caulton-Harris announced two grants accepted by the Council on a voice vote.  The funds will be used for community outreach programs as well as the medical reserve corp, which Caulton-Harris said has been activated when the city needs to set up emergency shelters. 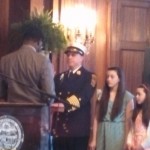 Some banter was also exchanged between at-large Councilor Jimmy Ferrera and Ward 7 Councilor Tim Allen on the recommendations from the Casino Site Committee.  Ferrera said the Site Committee was still working and the item would not come up today.  Allen noted that time was running short and the Council had no other regular meeting in April.  Ferrera replied that a special meeting may be called.

One of the transfers approved was within the Parks, Facilities and Buildings Department.  Pat Sullivan, the department’s director, announced that a test program had been set up with the Hampden County Sheriff to have inmates trim the terraces in the city with the possibility of savings for the city.  Sullivan said that the city had outsourced the maintenance of the city’s terraced medians a few years ago and the transfer was needed to purchase equipment the inmates would use.

The Law Department also had a settlement that required a transfer within its budget.

The big ticket item were transfers within the Police Department to fund capital improvements, like new vehicles and facilitate a new academy class to replaced, some, though not all department retirements.

Allen asked how the city was going to pay for these positions in light of impending budget cuts expected in the FY2014 budget.  Finance Director and acting CAFO T.J. Plante had said on Masslive last week that the retirements this year and last exceeded expectations freeing up part of the funds.  Plante told Allen at the meeting that preserving the newly hired policy may come at the expense of other departments.

All transfers on Monday night were approved unanimously.