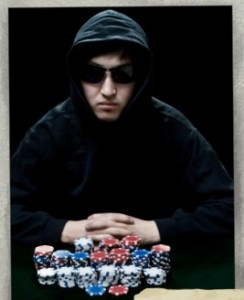 Who were you!?!? (Captured casinowhispers.com image via Google)

Shortly after the Springfield area’s most visible and arguably influential media source became a potential benefactor in the area’s competition to build a casino, The Boston Globe lamented that the area was losing a key voice in the debate.  The Republican had promised to limit its journalistic endeavors to only reporting while its editorial page would largely clam up.

In the absence of such voices, or perhaps responding to common cynicism about all of the Republican’s coverage, other voices came to the fore.  Some were familiar like those at the Valley Advocate or The Reminder.  However, new voices also arose.  One of them was Casino Whispers, which strangely disappeared as mysteriously as it surfaced.

Casino Whispers was primarily a website that traded in rumor and innuendo about the casino process.  It trained much of its fire on the proposals in the Springfield and across the river in West Springfield.  However, the Palmer proposal hardly escaped its snark and speculation.  While its allegations often crossed the line of journalistic standards, its allegations and suspicions about Hard Rock, MGM, Mohegan Sun and Penn National were irresistible to politicos, journalists, residents and hangers-on alike. 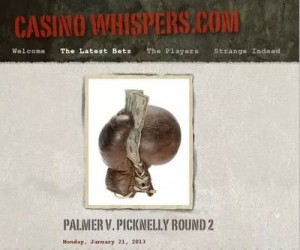 An image from “The Latest Bets” (casinowhispers.com via Google cache)

The sites activities, which included commenting on Masslive articles and forums, had a following even beyond the city’s political classes.  Sources say its commentary and even its mere existence intrigued and confounded casino developers with speculation rampant as to who the true author was.  The author had to be close enough to Springfield city politics to be familiar with movers and shakers like Charlie Kingston while having sufficient savvy to operate a fairly well put-together website (in Greater Springfield such individuals would be fairly rare).

It is no surprise then that when Casino Whispers’s vanished, a number of individuals were just as intrigued.  Over the weekend, readers noticed the source for the skinny on casinos was no more.  Maureen Turner broke the story Tuesday.

Today the website only forwards to a non-descript GoDaddy.com advertisement, its whispers silenced.  Whoever or whatever Casino Whispers was, it left little evidence of his identity behind.  Casinowhispers.com was registered ostensibly through GoDaddy.  The public registration information points to Domains by Proxy, LLC as the registrant rather than a person.

Domains by Proxy, LLC is a service related to GoDaddy that allows domain registrants to remain private.  However, it is far from clear that Casino Whispers used this with the intention of being surreptitious.  Western Mass Politics & Insight’s official registrant is also Domains by Proxy, LLC, an apparent byproduct of our use of GoDaddy for domain and hosting services. 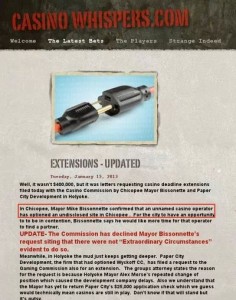 A blog post about extensions sought for casino proposals (casinowhispers.com via Google cache)

Other public domain for casinowhispers.com offer few answers, and instead only eliminate a few possibilities as to the site’s fate.  Casino Whisper’s domain did not expire and therefore got pulled from the web.  The registration data shows that the last update was on 3/29/13 or 4/2/13, depending on which data source used.  However, the date at which to domain would expire is January 4, 2014, nearly nine months after the site went down.

With the site down, Casino Whispers’s tracks are also fading.  Caches of the site yield and will yield increasingly less information as Google and other search engines’ crawlers pickup the GoDaddy ad as the most recent version of the site. 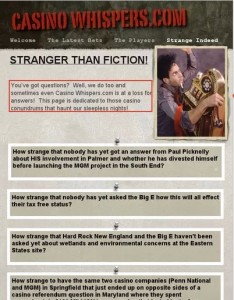 A screenshot of the “Strange Indeed” page (casinowhispers.com via Google cache)

Partial data of some pages could be recovered, including its “The Players” and “Strange Indeed” pages.  Its “The Players” page outlined broadly the speculation and rumor surrounding each of the casino bids by Hard Rock in West Springfield, MGM and Penn Nationals in Springfield and Mohegan Sun in Palmer.  Casino Whispers listed what it deemed to be odds of each bid’s success.  “Isn’t It Strange” consisted of top rumors and coincidences surrounding the overall casino process.  The site’s home page as of January 11 has also been preserved via the Internet Wayback machine.

Full visual reconstructions of Casino Whispers, particularly its blog-like “The Latest Bets” may be impossible, but WMassP&I has archived the code for several of the page’s blog postings in addition to several screenshots from other pages.  The code, taken from Bing, Google and Yahoo! search caches of the site, runs over 200 pages as a Word document. This archive could facilitate the preservation, if not the continuation of Casino Whispers’s legacy.

Casino Whispers’ has left other footprints that mirrors its actions on its website.  In several postings to the great commentariat of Western Massachusetts, the Masslive Forums, Casino Whispers refers and links to its newest postings.  The Forum titles are similar or identical to the titles given to posts on casinowhispers.com.  The last postings on Masslive, just as the website itself, date to mid-March.

Comments Casino Whispers left on Masslive stories follow this pattern, too.  They parrot some of the top criticisms on the website hitting almost all “The Players.”  One comment mentions Paul Picknelly, said to be involved with both the MGM and Mohegan projects, but not being sued like his brother, Peter.  Others question the wisdom of a casino near the increasingly busy intermodal rail yard in West Springfield and MGM’s troubles in New Jersey. 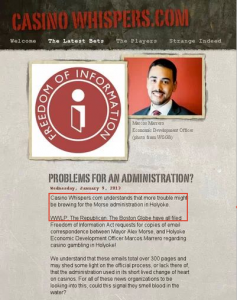 Several detail problems with the Penn National bid, such as the condition of the I-91 viaduct.  Curiously, the comments also seemingly presaged the Kingston story by more than a week.  This underscores that Casino Whispers had to be connected enough to city politics to sense the imminent publication of The Republican’s profile of the political power broker.

Whoever, Casino Whispers was, his or her identity shall remain a public mystery for the time being.  An email sent to the only known means of communication, its email tip line, came back as undeliverable.

The sudden departure form the scene makes Casino Whispers its own story in an of itself.  The casino developers had little to say about Casino Whispers’ disappearance.  An MGM representative said the company declined comment.  A Penn National spokesman said in an email, “We have no idea what happened to the site.”  Mohegan’s spokesman was unavailable for comment at posting time (this post will be updated when a response is received).

With the FBI apparently afoot in Springfield again, could they be related to Casino Whispers disappearance, as Turner speculated in her post?  Is it too hard to believe then Casino Whispers might have been an informant?  If a federal investigation of the city has begun, there is shadow and suspicion cast over casinos and more in the City of Homes.  Perhaps now is not the best time for less whispering in the City of Homes.