Analysis: MGM’s Wizardry of the Odds…

Rendering of the MGM Springfield (mgmspringfield.com)

After months of sniping and one-upsmanship, MGM, the Las Vegas-based casino developer, beat out Penn National to forge a community host agreement with the City of Springfield.  Mayor Domenic Sarno, in an at times mushy and naïve announcement, said that the South End proposal would be the one submitted to voters for approval in an announcement oddly timed to be in the shadow of the special senate election.

Now that MGM has been picked and the deal signed, the process will probably move very quickly.  The City Council will probably be under pressure by the mayor and MGM to ratify the agreement promptly and set the date for the citywide referendum for July.  Given that the City Council’s Casino Site Committee has been criticized as a figurehead (to put it kindly), any attempt to slow the process down and refer it to that committee will either be pro forma or just laughed off.

How did MGM do it?  For months it looked like Penn National had the edge.  The powers that be had lined up behind that proposal from Herbie Flores to Peter Picknelly to The Republican.  The paper stood to gain considerably as its land was to be gobbled up for the development.  Journalists covering this process closely (regrettably, we did not post much) largely agreed Penn National had an advantage among the elites.

A Rendering of Penn National’s design of Hollywood Springfield (hollywoodspringfield.com)

Part of what happened was a complete underestimation by Penn National of MGM’s ability to gain public support.  While Sarno trumpeted the many companies originally interested in Springfield, the reality is a bit less flattering for the city.  MGM wanted to develop a Western Mass casino in Brimfield before pulling out about thirteen months ago.  Then they turned their attention to the South End of the city.

Prior to that point, only two bids would emerge as serious contenders: Penn National and Ameristar.  Ameristar, despite a hefty investment in the former Westinghouse property on Page Boulevard, felt the city was uninterested in a casino too far outside of downtown and pulled out.  It is impossible to say that any fix was in, but as early as the December 2011 appointment of Kevin Kennedy as Economic Development Director, there was a public desire to avoid a “citadel” away from anything else.

Either way, by mid-summer, Penn National looked to be in good shape to forge a casino agreement with Springfield.  That whole plan would suddenly be put to the test when MGM helicoptered into the city with flashy advertisements and a fierce community outreach campaign.  MGM lawn signs began growing on city lawns and former staffers from the 2012 election found employment in the company’s outreach operation.  Police and Fire lined up behind MGM, as did the local NAACP.

Penn National was caught flat-footed. Their only bargaining chip at that point was power plays, but first it tried to match MGM.  Never expecting to wage what was effectively a political campaign, all they could do was play up expectations with gimmicks like promises for employment of city residents or renovations of the Paramount Theater. 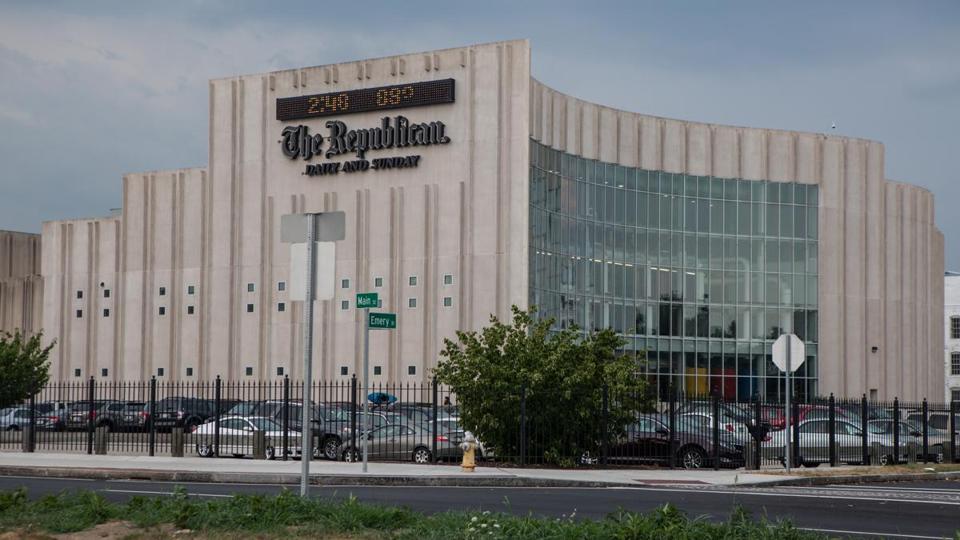 The Republican‘s HQ in Springfield (via BostonGlobe.com)

The paper did not appear a wholly unbiased arbiter either.  To be certain, they were neither outright hostile to MGM nor painfully deferential to Penn National, but there were serious questions raised about their reporting.  Maureen Turner pointed out their omissions in stories about Penn National that The Reminder’s Mike Dobbs caught.  Meanwhile, The Republican bellowed accusations on the front page about Pansy Ho and New Jersey’s decision to prohibit (currently under reconsideration) MGM from holding casino licenses that state.

Then signs of desperation began to crack on the Penn National camp.  The wild promises of setting aside 90% of jobs for Springfield residents was a first sign, but gimmicks were to be expected.  What raised eyebrows was Peter Picknelly’s statement that his bus company may not move to Union Station if Penn National did not get the agreement.  City officials never said so publicly on the record, but by all accounts they were not amused.

Kennedy said at the time that Picknelly’s non-involvement would not frustrate the long-awaited redevelopment of the station.  At Tuesday’s press conference, Kennedy played down the conflict saying that Peter Pan Bus Line’s corporate headquarters may not move if Picknelly does not find a buyer for his property.  That is very different from buses not moving to the station.

That may not have been a fatal blow if The Republican had not (or at least not seemed to have) gotten in on the act as well.  While its lengthy and well-written (which we praised at the time) piece on Charlie Kingston’s influence, particularly on Sarno, shed a necessary light on city government, it too had its omissions.  The Reminder’s Dobbs noted that this seemed more like a shot across the bow than just a spotlight, a not unusual tactic for the paper.

Penn National, whom many assumed had worked with or even hired Charlie Kingston—again there is no on the record proof—was largely absent from the story.  Instead, the paper took the time to note the connections between Kingston and former State Rep. Dennis Murphy, who has been publicly employed by MGM.

Instead of taking it as a shot across the bow, Sarno likely saw it as a reason to resist the paper—and not fold.  Not facing reelection for three more years, the paper’s ability to take him out for not doing their bidding was substantially diminished.  Sarno would have to live with the Kingston story fallout that made Sarno look like a puppet no matter what.  Moreover, the piece offered no direct evidence of mayoral corruption, either.

Meanwhile, Sarno had to contend with the very real fact that the public, to the extent that they supported a casino in the city at all, was on MGM’s side.  The Kingston story, if it was a power play as Dobbs alleged, may have backfired in another way, too.  If Sarno defied the will of the people and backed Penn National, the company thought to have suction on the inside, he would look more like a Kingston pawn and more like a cog in the darker elements of the city machine.  He might even expose himself legally just as the FBI is supposedly setting up shop again.

Another rendering of MGM Springfield (mgmspringfield.com)

Beyond the political machinations, however, Penn National also may have offered less in the end.  Financing Herbie Flores ventures does not necessarily do anything for the city and in negotiations, Penn National may have been unwilling to do as much and pay the city the sums to which MGM’s ultimately agreed.  While there is plenty of reason to remain skeptical of the idea that MGM’s payments to the city will erase its structural deficit, Penn National may not have even wanted to make that big of a promise.

Finally, there is plenty of grounds to question the effectiveness and policies of Sarno’s mayoralty (we certainly do).  Nevertheless, Sarno’s sappy, almost emetic plea to support the project Tuesday affirms that he does want the city to succeed and if one developer was not willing to pony up and another was, any other decision might be impossible.

The issue will go to voters, where, for the moment, it is likely to pass in a referendum paid for by MGM.  Turnout will be low.  If the vote is delayed, it could fall on the same day as the September municipal preliminary.

The ultimate authority rests with the Gaming Commission, which, according to spokesperson Elaine Driscoll, will not be complete that process until next year.  The competition appears to be really between Palmer’s Mohegan Sun Proposal West Springfield’s seemingly long shot Hard Rock Café development.

But what does this mean for Springfield if MGM get the license?  That answer is far less certain.  However good the city’s lawyers have been negotiating promises, MGM can and will find ways to hedge.  MGM, like other national developers, have bet on a more diffuse business model, rather than one based on major gambling centers like Las Vegas.  That could undercut a Springfield development’s ability to attract outside money between the Connecticut casinos and potential legalized gambling in New York and New Hampshire, not to mention the other two Bay State resorts.

That said, some of the up front cash could be used for much needed city improvements like Riverfront Park, if (and it is a monumental “if”) city officials do not squander it.

It is also unclear what efforts will be taken to mitigate the impact on existing businesses throughout the area while firming up the city’s existing retail centers like Eastfield and Five Town Plaza.  Not to mention, a casino alone cannot inspire a Renaissance, least of all in downtown, that will save the city.  Monolithic projects in Springfield have failed before and this one will too, if the city fails to find a way to broadly diversify its attractions and, more importantly, its job market. For proof, see Detroit.

We are uncommitted to a casino position.  MGM has promised a lot and many unanswered questions remain.  Yet, if Domenic Sarno said anything that was music to our ears, it was not about MGM.  It was about working on other, independent economic development projects in the city.  Indeed, only a holistic approach that broadly grows a diversified economy, able to sustain slips in, say casino revenue, can save Springfield.