In Second Try, a Pitch to Springfield’s Young Families….

SPRINGFIELD—The preliminary election is still four months away and nomination papers have another two months to be completed, but campaign kickoffs are already underway.  For some it is a repeat act, but hopefully with differing results.

Justin Hurst, an attorney and the scion of one of Springfield’s politically prominent black families, kicked off his campaign yesterday at the John Boyle O’Reilly club in the city.  Among the notable guests there was one figure, Mayor Domenic Sarno whose absence from the ballot may present both challenges and opportunities for anybody seeking at-large seats.

Hurst’s connection to politics runs deep.  His mother, Marjorie, was a longtime School Committee member and his father, Frederick, was a Commissioner on the Massachusetts Commission Against Discrimination, the commonwealth’s civil rights enforcement agency.

Frederick Hurst also runs the Afro-American Point of View, a newspaper that serves the city’s black community.  Hurst’s wife, Denise, holds an at-large seat on the School Committee.  She, too, is up for reelection this year.

Hurst ran in 2011, missing the fifth slot and a seat on the Council.  There was an open slot as Council Jose Tosado abandoned his seat to run for mayor, but instead it was snapped up by once and again at-large Councilor Bud Williams.  This time, it appears unlikely that any of the incumbent at-large councilors will drop their seats because the mayor is not on the ballot.  Often the mayor’s race will draw one of the at-large councilors to run for mayor, something that held true in 2011, 2009 and 2007.

However, without the mayor on the ballot, it also creates a degree of uncertainty as to what the election will look like.  With minimal media coverage (even with a mayoral race) and no large draw, predicting the election will be difficult.

That does not appear to be discouraging Hurst.  Waxing optimistic, Hurst said he was seeking a council seat again because he “feel just short.”  On countering lower turnout, he said that with the help of volunteers, friends and family, “I expect to [be able] to deliver my message.”

Hurst campaigning at the Pancake Breakfast last week (via Facebook)

Hurst’s campaign appears to be focusing on three pillars: better public safety, better schools and more and better jobs.  There is a particular emphasis on attracting young families like his.  His wife Denise and he are raising their child in the city.  Hurst, in his literature and his stump speech before the crowd, points to the need for more families to settle here in order to revive neighborhoods and the tax base.

But this time Hurst does not appear to be leaving everything to the old mechanics of campaigning in Springfield, which by and large is over dependent on name-recognition and almost allergic to canvassing and other modern tactics.  Campaign officials suggest that in addition to reaching out to voters generally, an emphasis will be placed on seeking out and convincing reliable voters using voter tracking software.

The Hurst campaign will also employ efforts to encourage voters to contact friends and family rather than simply cold-calling voters or knocking on anonymous doors, in order to build a voter database.

There is also a possibility that Hurst may attempt to draw off from another potential source.  Mayor Sarno gave words of encouragement saying he understood the difficulty of trying again after losing, “ First time I ran, I missed out,” he said.  Sarno ran for Council in 1997 and lost, but won on a second try in 1999.

Sarno also praised Hurst’s mother, Marjorie, with whom Sarno said he had disagreements when they served on the School Committee.  He also praised Denise Hurst and said that this year, since both are on the ballot, “It’s a twofer!”  In light of the family’s political an community experience, Sarno said of Hurst, “His pedigree is there.”

The Hurst family were important backers of the mayor’s in 2011 and so it is little surprise that Sarno would be supporting Justin Hurst’s run.  Marjorie Hurst spoke in support at Sarno kickoff in 2011.  The family almost certainly provided additional support behind the scenes, which was essential as Sarno sought to keep his office by avoiding the city’s minorities lining up behind Tosado.

The question may be is whether or not the mayor will campaign with Hurst publicly.  That could prove decisive in a poorly-covered election.  Sarno may find the freedom to do so since he is not running.  It has been rare for mayoral candidate, particularly incumbents, to offer such full-throated endorsements, preferring instead to send word to supporters not to vote for council candidates backing the other guy.

Hurst may also draw help from supporters of at-large Councilor Tom Ashe.  During his unsuccessful bid for Clerk of Courts last year, Hurst and much of the city’s black establishment backed Ashe.  If elected, Ashe had announced he would resign his Council seat, which would go to Hurst as the 2011 election’s 6th place vote-earner. 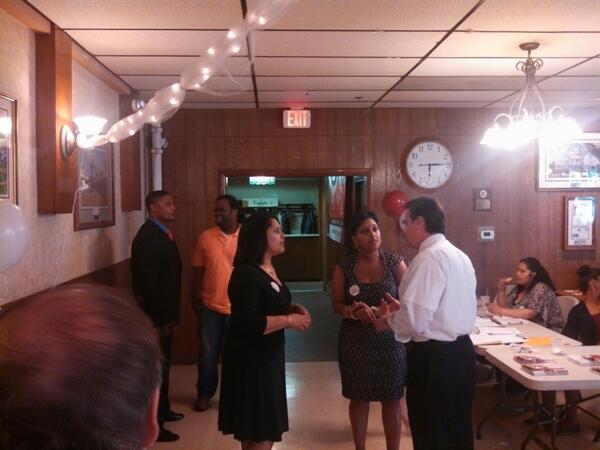 Hurst and his wife are also said to have the trust of the city’s more progressive elements, despite his ties to the city’s establishment.  Indeed, Sarno‘s allusion to his and Marjorie Hurst‘s disagreements may indicate an awareness of this possibility with Justin Hurst on the Council.

With no open seats, Hurst’s campaign will depend on knocking off one of the weaker at-large incumbents.  Conventional wisdom would suggest that this would either Jimmy Ferrera or Bud Williams, but Ashe’s loss last year and Tim Rooke’s recent bad press could undermine assumptions.

The at-large race, however, is not a one-on-one limiting the ability of candidates, particularly challengers to differentiate themselves from the incumbents.  Hurst declined to take the bait when asked how he would strike a contrast, “I think all of the candidates are fine,” he said smiling.