Take My Council Please: A League of Their Zone…

SPRINGFIELD—After years in the making, the City of Homes finally adopted a citywide revision of its four decade old zoning ordinance, which one activist described as so old it lacked the word “condo.”  In stark contrast the tepid to frosty reception many councilors and developers gave the ordinance last year, it passed unanimously last night.

Originally drafted by a committee of citizens and developers, the changes overall modernized the city’s zoning rules to reflect a national trend back toward urbanism.  Springfield, however, is a city of contrasts and so any revision would have to be mindful of its suburban characteristics, particularly its post-WWII developments like Eastfield and Five Town Plaza.

Since September, city officials, residents and developers returned to the drawing board to find a compromise to the complaints the last group had with the proposal.  Sticking points included the design of site review and perceived subjectivity in the parts of the zoning language.  Tuesday’s passage was the culmination of that compromise effort


Ward 7 Councilor Tim Allen, who as Chair of Planning and Economic Development in 2010 and 2011 said passage feels great.  However, he noted that part of the two years of delays since he had the P&ED chairmanship were out of the Council’s hands.  Planned meetings were to advance the revision in 2011 never happened having been scheduled on days after the June 2011 tornado and then the October snowstorm. 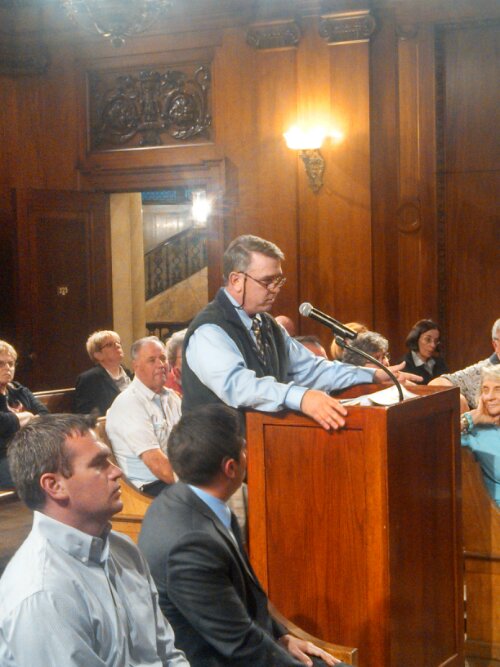 The passage was hailed as a victory for countless citizen activists, many from neighborhood groups, as well as the city’s Deputy Director of Planning Phil Dromey, who spearheaded the movement from within the city’s bureaucracy.  Of course its passage also carried with it political significance as well.

Prior to Tuesday, there had been frustration that the process had dragged for nearly seven years and fears that some parties were suddenly using their clout to stymie the process entirely.  Developers, including Colvest’s Frank Colaccino, were involved in the revision from the beginning.  And yet there was a sense that some developers, long accustomed to the current rules, had little incentive to change the rules.  It is worth noting, however, that although Colaccino was not present Tuesday, he did said a letter of support for the compromise zoning revision.

Watergate had not even happened yet when Springfield adopted its current ordinance. (via wikipedia)

Broadly speaking, the goals of the revisions was to update the 40 year old ordinance and establish a site review process.  Site review ensures developments fit the character of the host neighborhoods, but the review is not a license to deny projects.

A tiered system would assign that review to levels within the Planning Department and the largest projects would go before the Council.  Since September, the tiered system was scaled back to three instead of four levels.  The largest developments would still require Council approval.

The revisions empower the otherwise advisory Planning Board with real power for the first time.  Dromey told WMassP&I that although review does not empower the reviewing bodies like the Planning Board to deny a project, they can attach conditions.

Other changes from September, Dromey explained, affected parking and historic structures, however most of those change consisted of minimizing developers concerns that the language was too subjective.

A rendering of MGM Springfield’s proposal (via mgmspringfield.com)

In September, when Councilors put off a decision, it drew an angry response from activists who had worked on the revisions.  However, it is unclear whether or not that political pressure forced the Council to act.  Rather the casino process may have helped the revision along.

One of the additions to the revision was a casino overlay zone, which will need to be filled in by MGM and then approved by the Council at a later date.  The recent approval of the casino agreement made hitching the zoning revision to MGM’s wagon much more easy.  Approving the former without approving the latter would have been ridiculous, even if absurdity is hardly foreign to the Springfield City Council.

Another whisper of politics was the mountains of praised heaped upon Ward 6 Councilor Ken Shea.  A consistent supporter of the zoning revision, many councilors and Dromey himself credited Shea with pushing the ordinance despite the opposition in September.

That Shea supported the ordinance is not particular remarkable.  The Forest Park Civic Association, widely seen as a force behind his 2011 candidacy, fiercely supported the new ordinance and they are a key part of whatever base Shea has in Ward 6.

While Shea’s support the revision was never shaken, a failure to get the new ordinance through the legislature could have become a liability as Shea entered the Fall elections.  No  challengers have filed for Ward 6, and the only rumored candidate is Shea’s predecessor Amaad Rivera.  However, a stronger showing of impotence on an issue important to FPCA and other activists in Ward 6 could easily have persuaded Shea’s backers to go candidate shopping.

It remains to be seen whether that can be enough to ensure Shea‘s victory, but for the city, there is little doubt replacing it Nixon-era zoning ordinance is a win.  Additional technical steps may remain before final effective passage, but otherwise the ordinance will take effect after 90 days.