Twelve days after the Springfield City Council suddenly veered off course from an assured passage of common sense, if painfully realistic residency ordinance reform, how it happened should get as much attention as that it happened.  The latest derailment of an agenda item came upon the invocation of Springfield’s version of the filibuster: Rule 20.

Springfield does not have a true filibuster.  What Wendy Davis did in Austin, Texas, that is a filibuster.  The US Senate used to do filibusters.  It is not inaccurate to call the 60 threshold “a filibuster,” which is basically denying a majority to enact its will. A true act of filibustering, that is talking to stop a bill or other action, rarely happens.  In Springfield councilors in theory can only speak for three minutes before being gaveled off and any councilor can call the question, which triggers an instant vote. 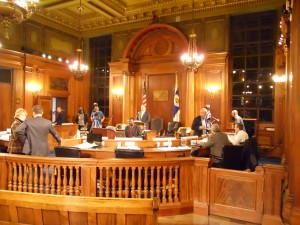 However, there is a form of delay, or some might say obstruction, that can serve a similar purpose: Rule 20.  Rule 20, the existence of which goes back at least 25 years according to City Clerk Wayman Lee, kills action on a measure until its financial impact can be determined.  “Financial impact” is not defined and because the rule calls for an immediate cessation of debate pending a comptroller’s report, there is little opportunity to argue against the invocation.

In theory and in a city as financially erratic as Springfield, this rule is a good thing.  Councilors can stop, and maybe even improve an item that appears to be marching full speed ahead.  Like anything it could be abused, but for the most part its usage, like the filibuster before 2007 in the US Senate, was rare.

Times have changed.  This year alone at least three items, one being the residency ordinance, have been subjected to Rule 20.  Past years had more, including the Biomass repeal, an eminent domain case, an hike in tag sales, the casino plan, transfer of properties and more.

The continued abuse of this procedure must be stopped before it gets out of hand, especially as it is so often used for merely grandstanding purposes.  No better example is the residency ordinance.  Despite at-large Councilor Jimmy Ferrera’s demagoguery about existing employees’ lawful, if not wise, excuse from the residency ordinance, it strains imagination to find the financial impact in the ordinance.

Were there actually a financial risk, or a risk of suit perhaps, then Rule 20 may not seem so inappropriate.  However, the changes Ferrera proposed are more likely to inspire suits and undermine the city’s financial position.  This is all the more true as it was not Ferrera, but Ward 1 Councilor Zaida Luna who invoked Rule 20, ostensibly over a lack of city minorities employed by the city.  In fact, the proposed change would be more likely to help minorities, than delaying the change further (or firing existing employees, which could inspire suits and leave less money for services).

It was clear at-large Councilor Kateri Walsh, presiding over the meeting at that point, was not comfortable with the use of the rule in this way.  If Walsh has any undeniable talents in the Council, it is an understanding of the rules and even she could not see the use here.  Only her fealty to those rules led her to sustain Luna’s invocation.

The answer is not to be to abolish Rule 20.  Rather, the invoking councilor should be forced to explain their position and name, with at least some specificity, what the item’s financial impact is.  Up to Luna’s invocation, most of the above uses of Rule 20 could pass this test.

Although it appears her intent was the delay and kill repeal the biomass permit, Walsh’s use of Rule 20 in 2011 was fair since the threat of a lawsuit alone is an obvious financial impact.  Former Councilor Amaad Rivera’s controversial use of the rule to slow expropriation of properties for the Forest Park Middle School, too, easily meets the financial impact test.  Ward 8 Councilor John Lysak’s invocation against a change of the foreclosure ordinance succeeds as it could have reduced the city’s income under the ordinance.

Other uses are closer calls.  Last year, Ward 2 Councilor Mike Fenton used the rule to slow changes in fees for tag sales.  Less clear than that was at-large Councilor Bud Williams’ use of it early this year to stop some property transfers ostensibly because the sale prices were too low for the city.  However, the delays had the effect of putting the deals in jeopardy and further inquiries yielded little more than extra press coverage for Williams.

Even Ferrera’s patently self-serving use of the rule on the casino plan might be shoehorned, if he could actually identify the financial impact beyond likely what a one-time casino supporter turned opponent told him.

(Indeed the casino case also shows Rule 20’s limitations as the Comptroller and the Council were ready to meet days later and pass the agreement and shut down Ferrera’s attempt to polish his halo.)

But not here.  Because the ordinance change as written would do nothing to the status quo on existing waivers, there would be no financial impact, Luna would have needed to identify some other budgetary effect.  Maybe she could identify an impact or maybe not.  In any case, the onus should be on the invoking member and merely out there in the ether.

This misuse of the rule is also complicated by councilors’ own ignorance of their rules.  On more than one occasion, Councilors, clearly displeased or even angered by the Council president’s action, failed to fight back not knowing they could…under the supplementary rules they have by incorporation. 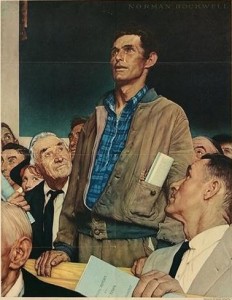 You can talk in the City Council, but not forever to stop an item (Norman Rockwell via wikipedia)

The answer is to tether Rule 20 to more than councilors’ caprice, opportunism or even ignorance.  It is not a bad rule on its face and in the absence of the opportunity for a true talking filibuster, a not inappropriate tool to force more debate on an item.  But it cannot afford to be abused any longer.  The Council must nip this in the bud before it gets out of hand.  Councilors must justify its use beyond some idle and convenient concerns.

As for residency, these latest antics may very well doom passage of anything right away.  There are real Constitutional and legal concerns that could arise for no other purpose than political opportunism.  This does not mean that Mayor Sarno was right to grant those waivers, but he did and they are lawful.  This latest invocation of Rule 20 may actually run counter to the rule’s purpose.  If the Council suffers Ferrera’s latest election year equivalent of streaking across a football field, it may expose the city to untold lawsuits while a smarter approach to policy is abandoned.