SPRINGFIELD—Once more the City Council faced another light agenda Monday as it made some final steps for ordinances affecting fees in the city and transferred funds within departments, a typical acts in the waning weeks of the fiscal year.  Also included were a resolve to urge Congress to pass comprehensive immigration reform and another resolve tacked onto the end of the agenda.

Ward 3 Councilor Melvin Edwards and Ward 8 Councilor John Lysak were not present at the meeting.  Earlier in the day Edwards’ wife and dogs were attacked by another dog, which prompted Edwards to miss the meeting.  The absence of Lysak, who is friends with Edwards and his family, has been attributed to helping out Edwards after the attack.

The Council kicked off the meeting by confirm Jessica Quinones to the Springfield Housing Authority.  The first financial items consisted of moving money into the Law Department’s Settlement accounts from which the city pays out settlements with those that litigated against it.  It was due to $112,000 infusion from an account the City Comptroller uses to collects leftover funds across city government.

Ward 1 Councilor Zaida Luna had asked that the item go to Committee to discuss the matter further, but other Councilors demurred.  Ward 7 Councilor Tim Allen inquired about the size of the city’s settlements in recent years.  John Liebel, Chief of Litigation in the Law Department explained that for several years now transfers to the settlement account had been necessary as the amount budget had come up short.  Although, he did say that part of the excess this year was due to settlement in the Melvin Jones matter.

The motion to committee failed 8-3 with only Luna and at-large Councilors Jimmy Ferrera and Bud Williams voting for it.  The item itself passed unanimously.

Other transfers, for road construction and stabilization reserves, passed unanimously, except that on the latter, Luna was recorded absent as she had stepped out of the chamber.  A later item passed, which did not require a recorded vote, allowed the mayor to increase the demand fee the city charges when sending out warnings to delinquent taxpayers. 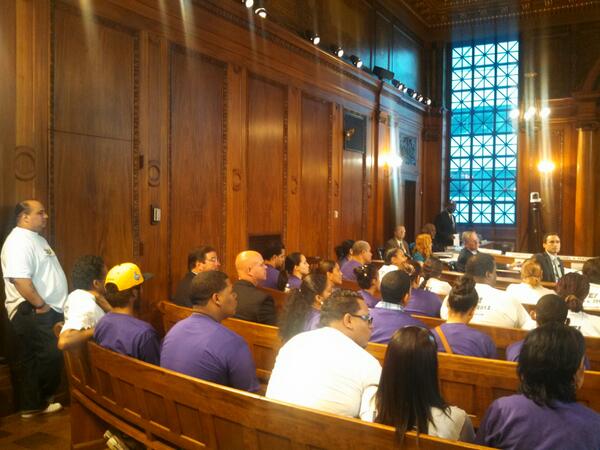 Luna, as the lead sponsor, read the item out loud about efforts in Congress to pass reform of the nation’s immigrations, which have suffered from a number of deficiencies over the years.  The system is unable to get the workers it needs for countless jobs, which has stifled creativity and economic growth.  Meanwhile, millions of undocumented immigrants, who work and pay taxes in the United States live in the shadows.

Efforts in Washington have moved along, in part because Republicans fear a repeat of  Mitt Romney’s dismal performance among Latinos for whom the issue is important.  Many conservatives remain opposed arguing that the southern border must be secure first, even though net immigration from Mexico has been around zero for years.  This fact may leave the “secure the border” argument as little more than a fig leaf for less scrupulous opposition.  In Springfield, however, the resolve received unanimous support from Councilors, albeit on the voice vote.

Members of the SEIU 1199 Community Action in Springfield filled the left side of the gallery of the Council and erupted in the applause upon the resolution’s passage.

The Council also passed hikes in fees for marriage, birth and death certificates from the Clerk’s office and for tobacco licenses from the Health Department.  These passed without dissent.

Another item, a hike in the tag sale license fee, also increased the number of tag sales allowed at an address in any given year to four from two.  Allen proposed an amendment that would limit that number to three.  Williams challenged Allen saying the Clerk proposed it and that it generates revenue.  Allen explained that this was at the request of those in his ward.

Allen’s amendment failed on a 5-6 vote (seven were needed for passage).  Ferrera, at-large Councilor Tom Ashe, Ward 2 Councilor Mike Fenton and Ward 6 Councilor Ken Shea joined Allen in dissent.  The item went on to pass 8-3 with Allen, Fenton and Ferrera the only no votes.  Notably, Ferrera was also listed as a cosponsor of the ordinance despite voting against it.

Fenton, who chairs the Special Committee on Residency, tabled a final vote on changes to the residency ordinance so that Edwards and Lysak could vote.

The remainder of the original agenda passed with little debate.  Property deeds were transferred for surplus property and gifts were accepted on behalf of the Fire and Parks Departments.  The Fire Department gifts were ATV’s to assist in patrolling the city’s woodland areas for fire while the Park donation was green space meant to make up for parkland given up for a project near Unifirst’s Indian Orchard facility.

The final item was a resolve urging the Commonwealth’s Department of Youth Services to reconsider the placement of a group home on Green Lane in the city’s Atwater Park Neighborhood in a single family dwelling.  Introduced by Fenton and Ferrera, the resolve noted that the facility did not fit with the character of the neighborhood.

Fenton, after introducing the resolve, noted that the Dover Amendment, allows the operators of the facility, which are not technically the commonwealth, to avoid seeking a special permit from the Council, which would normally be the case.  It is able to do this by using the law’s “educational” language.  Fenton said that a well-attended community meeting looked to statutory changes as well especially given Springfield’s disproportionately high number of similar facilities.

At-large Councilor Tim Rooke, whom Fenton and others said had railed against the use of the Dover Amendment in this way before, praised the resolve and the work of its sponsors.  Ward 4 Councilor E. Henry Twiggs echoed those comments and recalled a similar problem in his ward recently.  Ashe suggested the Council hold follow-up committee meetings on the subject.

The Atwater Park Neighborhood is along the Chicopee Border near Bay State Hospital east of I-91 (via atwaterpark.org)

A Department of Youth Services spokesperson, in a statement to WMassP&I, declined to respond to the accusations that Springfield already has more than its share of such facilities per capita.  It did not confirm that such a facility was definitely going to Green Lane, but DYS, “issued a Request For Response for a staff-secure boys detention unit that will provide services to our youth in Hampden County.” was An RFR is a bid for services.

The statement said it was “possible that a provider may have submitted a proposal in response to this RFR that included property at 100 Green Lane in Springfield.”  It went on to assert its respectfulness of “community concerns” and the need for “communication with community stake holders related to the siting of residential programs.”

In a follow-up email, DYS spokesperson Daisy Gomez-Hugenberger, did say a provider cannot open a facility unless it has received an RFR.  The proposal the provider submits must include an appropriate site for the proposed facility called for in the RFR.  As to the use of the Dover Amendment, Gomez-Hungenberg emailed, “Ultimately, this is up to the Provider to pursue and support their own siting process.”

Melinda Phelps, a resident of Atwater Park and speaking on behalf of its civic association said in an email that Atwater Park is a geographically compact, yet diverse middle class neighborhood.  She noted that the neighborhood already had given up some of its space for community institutions including I-91, a women’s correctional facility and an elementary school have already had an impact.  “In order to maintain the residential nature of this community, the residents are opposed to one more encroachment on the neighborhood,” Phelps emailed.

Phelps also noted that the original petition included the signatures of 107 residents and praised the Council’s action on Monday.

Sources familiar with the issue say that the facility is far from a done deal, but it could prove to be an impetus for change after years of similar such proposals sailing through with little push back.  Springfield community leaders have long complained that the city has become the site for many such facilities while its neighbors bear disproportionately less of a burden.

Atwater Park’s resistance may present some dicey, but not insurmountable, charges including both NIMBYism and exercise of pull that other neighborhoods lack.  Many of the city’s most influential residents, including Congressman Richard Neal, live in Atwater Park.  Still, the point remains that there is a problem if disproportionately too many of Hampden County’s societal ills end up in Springfield (and Holyoke) and nowhere else.