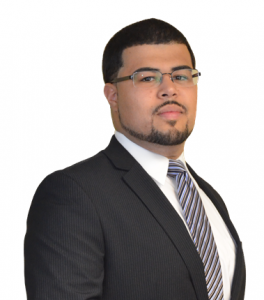 SPRINGFIELD—Speaking before a crowded hall at the Cedars on Island Pond Road after delaying the start to his campaign several months, city resident and activist, Ernesto Cruz kicked off his bid Thursday for one of the City Council’s five at-large seats.

In a speech capped by a standing ovation, Cruz, 28, pitched more inclusive management of the Police Department, modernization and transparency for city government, and public health and promised to bring his tireless work ethic to City Hall.

Cruz joins a relatively small slate of at-large candidates including all incumbents, 2011 candidate and political scion Justin Hurst, Joshua Carpenter and Jeffery Donnelly.  The race is notable as being the first in decades without the mayor at the top of the ticket and the first in several years in which no at-large councilors retired.  Also, in contrast to 2011’s abysmal number of contested races, half of the ward councilors have challengers.

Cruz had planned an announcement much earlier this year, but put off his campaign to take a job organizing area communities including Springfield and Holyoke for Senator Ed Markey.  Before that Cruz had worked as an unpaid volunteer for Elizabeth Warren, Ward 3 Councilor Melvin Edwards and Jose Tosado.

Prior to that, according to Cruz and his campaign, the Mulberry Street resident worked as a janitor, car lot manager and as a life insurance agent New York Life and MassMutual.  He left the private sector and began working with a community groups including the Mason Square Health Task Force, Men of Color Health Awareness, and the Puerto Rican Cultural Center.

Cruz pledged to bring the same dedication he brought to his other jobs to 36 Court Street, “I’ve worked my entire life,” he said.  “I worked 16 hour days for the Markey Campaign. I’m ready to do that for the City of Springfield.” 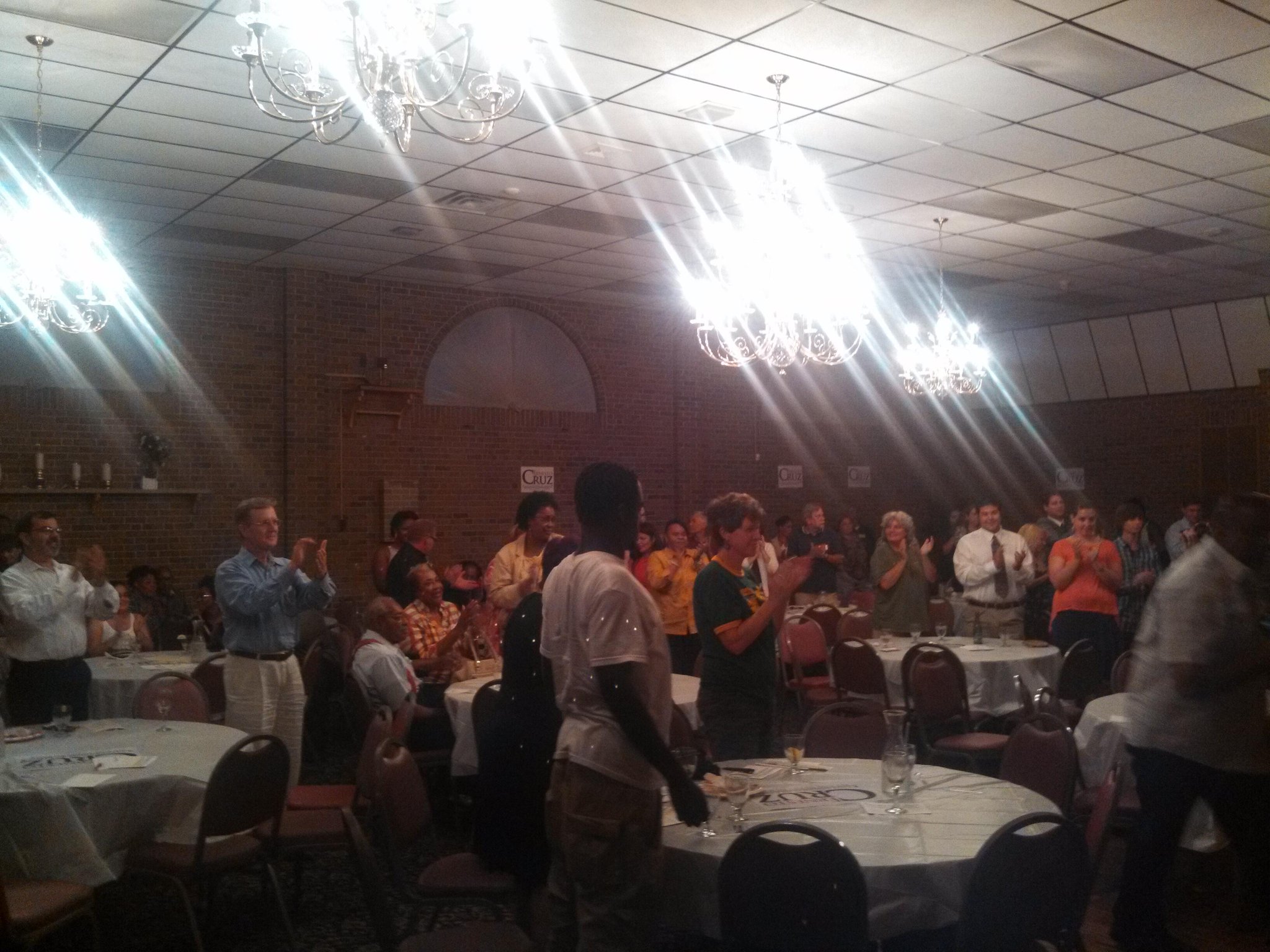 The diversity of the audience reflected how Cruz had made an impact as he built his resume.  Supporters from every walk of life and across political spectra were in attendance.  Ward 1 Councilor Zaida Luna sat near one of her rivals in the fall contest, Miguel Rivas.  Social justice activist Michaelann Bewsee and the city’s Democratic City Chair Ward 4 Councilor E. Henry Twiggs were in attendance alongside Ward 8 Councilor John Lysak, the Council’s one-time sole Republican.

Other guests included Ward 3’s councilor Melvin Edwards, Rosa Perez, a candidate for the School Committee’s Ward 1/3 seat, Zaida Govan, a candidate for the Committee’s Ward 2/8 seat, and Holyoke State Rep. Aaron Vega.  Many in attendance, including the opening speaker and Cruz Committee member Shanique Spalding, met Cruz during the Markey campaign, either as staff or as volunteers.

Mark Fitzpatrick and his wife Heather moved to the city earlier this year and also met Cruz while volunteering for the senator‘s campaign.  Fitzpatrick called Cruz, “a man with great insight into the city’s needs” and added that new residents like themselves like the idea of having somebody such as Cruz working in their new city’s government. 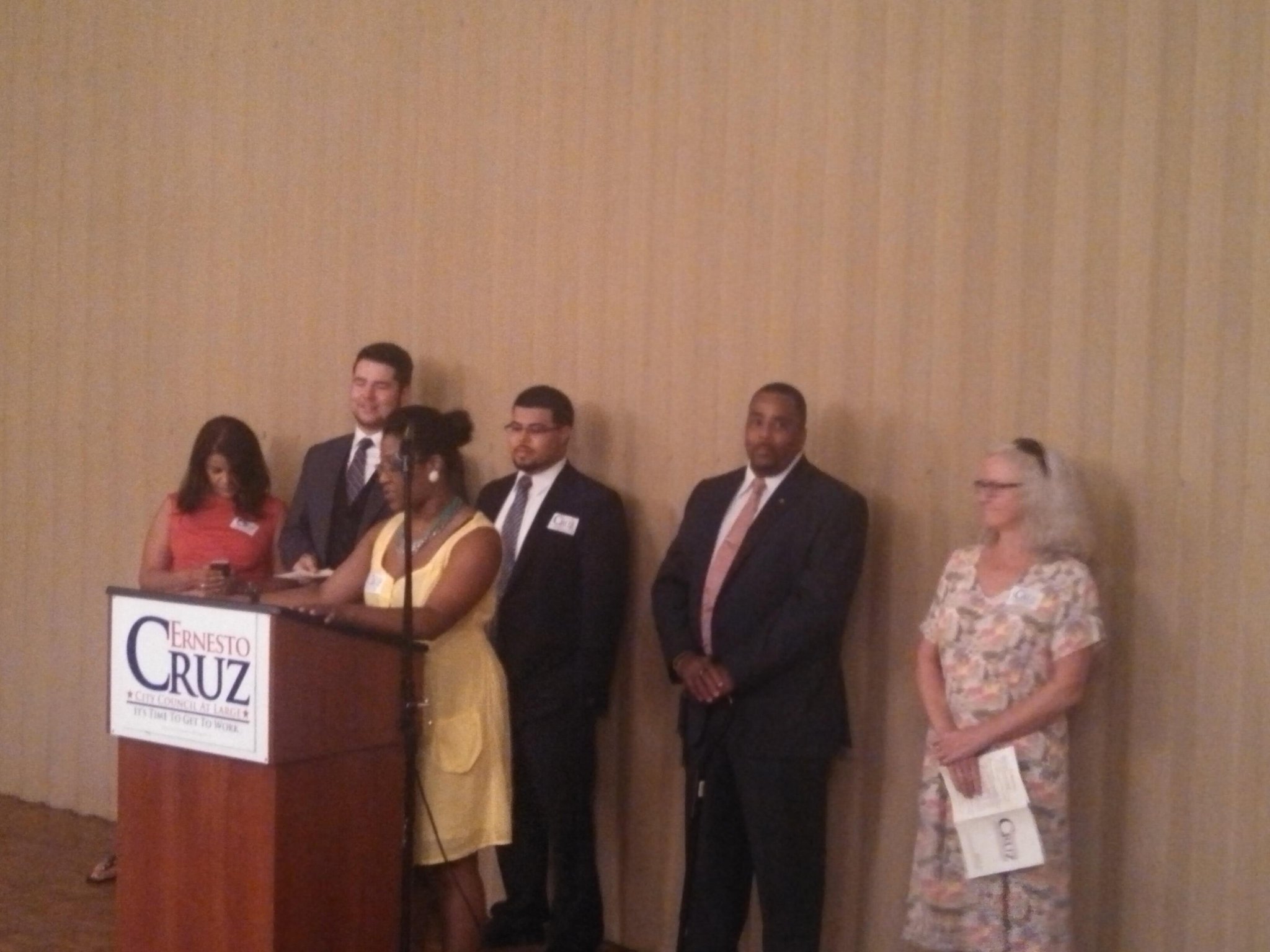 One overarching theme in Cruz’s speech and those that introduced him were his work ethic.  As important as his ideas were, Cruz’s overall theme “It’s time to get to work” touched a number of cords, including the immigrant experience, community involvement and, however unintentional, a direct parry to unfortunate stereotypes about Hispanics, particularly Puerto Ricans.

“My parents came here looking for opportunities,” Cruz said of his family which moved first from Puerto Rico to the Bronx, where Cruz was born.  His family then moved to Springfield, first to the North End, when he was 3 months old.

Cruz went on to say that he wants to go to City Hall to create a city where anybody can have a better life.  “If they work for it, they can have it,” and not because they are well-connected, Cruz said.

Edwards, who introduced Cruz, spoke with pride as though Cruz were his own son, urging support for the twenty-eight year-old because City Hall needs more people who “roll up their sleeves and go to work.”  The Council needs people like Cruz, he said who are “Not doing the white thing, not doing the black thing, not doing the Puerto Rican thing, but are doing the right thing!” 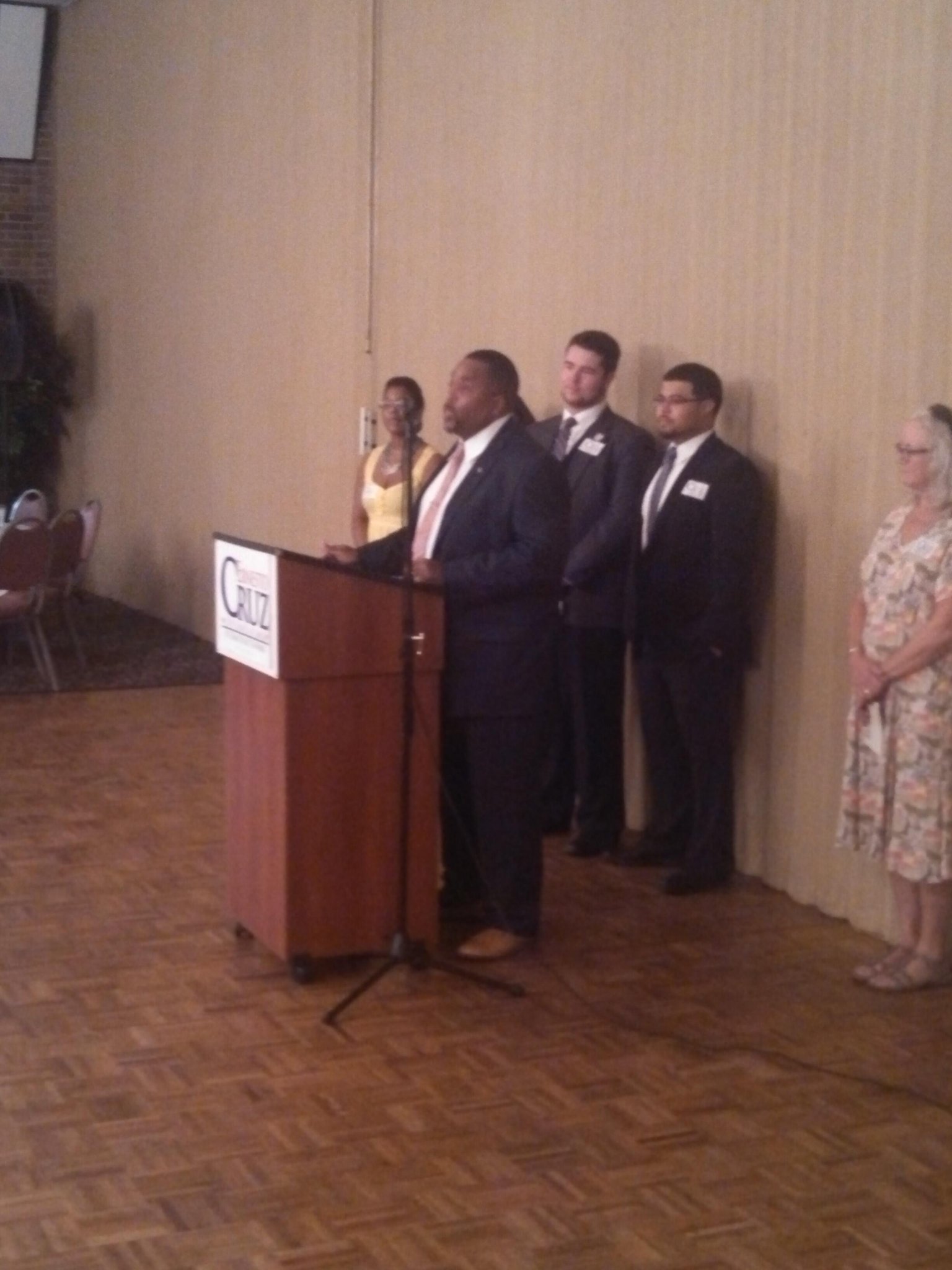 Cruz emphasized three broad areas in his platform: crime and Police leadership; transparency and accountability in all of city government; and public health, namely cleaner air.  Cruz called for a return of a Police Commission to dilute the power concentrated in the office of Police Commissioner, which could act a forum for both citizens and everyday cops to air concerns and adopt best practices for the department.

Taking a dig at knee-jerk reactions to spikes in crime, Cruz said, “I don’t like tougher.  I like smarter.”  He added that the problem is not just police hierarchy, noting that often times when cops in good faith try to bring kids they pick up off the street to a program only to find it is no longer available.

Cruz also took a jab at the inadequacy of the city’s digital presence and transparency.  Both city agencies and even the Council itself has failed to operate according to their mandates and engage the public, he said.  Earlier this year, WMassP&I found that several Council committees last year were nearly derelict and almost never met.  Cruz called for a model participation ordinance that would ensure committees and commissions under both the executive and legislative branches do better bringing in public input.

Finally, Cruz touched on improving the air quality of the city.  He cited his own grandmother who suffers from bronchitis and friends that breathed more easily during a week away outside the city.

But the soft-spoken Cruz drew accolades for more than just his platform. Govan, the School Committee candidate called Cruz “intelligent, but” she added, “does not flaunt it.”  Edwards also alluded to Cruz’s thoughtfulness and intellect, mentioning a conversation he had had with Cruz in which Sun Tzu’s “The Art of War” came up.  Edwards said, half-kidding, he thought “it was a coloring book.”

Councilor Michael Fenton is currently the youngest member of the Council. (WMassP&I)

However, Cruz’s age was also on the minds of many there.  Pat Carney, Chairwoman of the Ward 6 Democratic Committee (appearing in her capacity as a private citizen) and one of the speakers emphasized the importance of younger people getting involved.  “They will be here long after we are gone,” Carney said, speaking in part to her contemporaries in the room.  She praised Cruz as a “studious, serious, and dedicated young man” who is part of a group of young folks trying to bring change to the city.

Another woman in the audience Geri Gardiner echoed that, “The theme has been we need young people.”  Seeing passion like Cruz’s in people his age, “That’s what gets to me,” she said.

Cruz would not be the youngest member of the Council if elected.  Ward 2 Councilor Mike Fenton, 26, who is unopposed for reelection would be.  However, Fenton’s example of success may provide something of a template for Cruz.  In 2009, Fenton, then 22, ran against an figure with deeper roots in the establishment than he, and won despite doubts over where he could compete against the nephew of a former mayor.

Cruz, seeking an at-large seat at a time when there are no vacancies would need to similarly shock the competition in order to win.  But it may prove more difficult as unlike the 2009 first in a generation ward race, turnout is feared to be low and media coverage minimal.

Still Cruz waxed optimistic, urging that ideas can prevail over inertia  “This campaign is about bringing back a substantive debate to city politics. We need be introducing real solutions to the problems our city faces,” he said.

** Editors Note: WMassP&I’s Editor-in-Chief is a member of the Springfield, Mass Ward 6 Democratic Committee.  All Ward 6 members attended in their capacity as private citizens and/or members of the press.