Jeffrey Stanek, candidate for Mayor of Holyoke (via Facebook/Stanek campaign)

Some five years ago, a Maine-based telemarketing company and many of its employees found themselves in court, accused of defrauding a client of theirs.  However, the client, MyFreeMedicine.com, did not merely allege that they were harmed, but that the firm Advancetel and many of its officers, including controller Jeffrey Stanek, had perpetrated a fraud under the federal Racketeering Influence and Corrupt Organizations Act.

Stanek, now a candidate for mayor in Holyoke, ultimately escaped any liability.  He argued successfully to a Maine federal judge that the claims were baseless.  As the lawsuit began to unravel, it became clear that MyFreeMedicine was largely grasping at straws before more or less collapsing under the weight of its own legal troubles.  However, the suit provides one of the few windows into the business career on which Stanek is running to defeat incumbent mayor Alex Morse.

Stanek, an accountant by training, served as controller of Advancetel at a turbulent time for the company, but generally details about his roles in business are hard to find.  What facts available in public documents, on his and others’ LinkedIn pages and in Stanek’s own defense in the RICO lawsuit color the pitch he has made to Holyoke voters.

Virtually none of his past employers had anything to offer about Stanek‘s business experience.  Either individuals could not be reached, employers denied comment entirely or superiors had only the haziest of recollections.

Stanek’s first job out of college was as an accountant at the firm Bailey, Moore, Glazer, Schaefer and Proto in Woodbridge, Conn.  Gordon Oberempt, a retired partner at Bailey Moore, said, “I don’t remember what level he was at,” referring to his accountant position, “I just remember the name.”  Oberempt declined further comment on his position without a release from Stanek.

Stanek’s campaign was contacted yesterday requesting an opportunity to discuss his work history.  Any response received in the next couple of days shall be added in an update.

The Morse campaign, when asked about Stanek’s work history, did not comment directly.  “Alex Morse is the only candidate in this election who has managed a $124 million budget, who has a proven record of job creation,” campaign manager William Glidden said in a statement, adding that turning back would sacrifice progress made.

Media reports have focused on Stanek’s time at CWL Investments, a Michigan franchisee of sandwich shops, and Advancetel Direct LLC, the subject of the RICO lawsuit.  Stanek waved off the suit before The Republican editorial board, “Anybody can file a lawsuit.”

While the suit’s amended complaint had spurious accusations, the outline of the company and its relationship to its principals is harder to dispute, which MyFreeMedicine unconvincingly termed “the enterprise,” a term for corrupt organizations under RICO.  Stanek’s former company, Advancetel, served as a direct marketing firm selling products, including medicine. It also sold to customers calling response to ads, as in the case of its relationship with MyFreeMedicine.

Some of the allegations of MyFreeMedicine are salacious such as accusations of drug abuse and lawlessness, though the suit never accuses Stanek of that behavior.  The plaintiffs alleged Stanek approved fraudulent documents and/or billing submitted to MyFreeMedicine or others.  The judge ruled that this did not meet the high burden of RICO and Maine fraud laws.

Even if it were true Stanek knew about alleged fraud, he argued in a motion, he neither agreed to any conspiracy nor engaged in any predicate acts needed to be join a conspiracy.  More to the point, court documents, like the one formally dismissing claims against Stanek, reduced his duties to “transmitting” and “assembling” data, rather than engaging in any discretionary management of his own.

The experience with Advancetel and another employer of Stanek‘s also highlights of one Stanek proposal for economic development.  He has suggested this type of business for Holyoke, but such jobs are unlikely to address Holyoke’s socioeconomic ills.

Thomas Jeravich, a professor in the Labor Studies program at UMASS-Amherst, who has studied call centers’ economic impact said, “There is the idea that call centers are a panacea for economic development.”  The center, he said, often lack stable benefits or wages, often lack a career latter and open and close frequently.  Some firms such as in customer service or with unionized workforces provide some stability, but most, including “Those that are involved in basically sales” are the “most vulnerable.”  By all accounts, Stanek’s companies have been involved in sales. 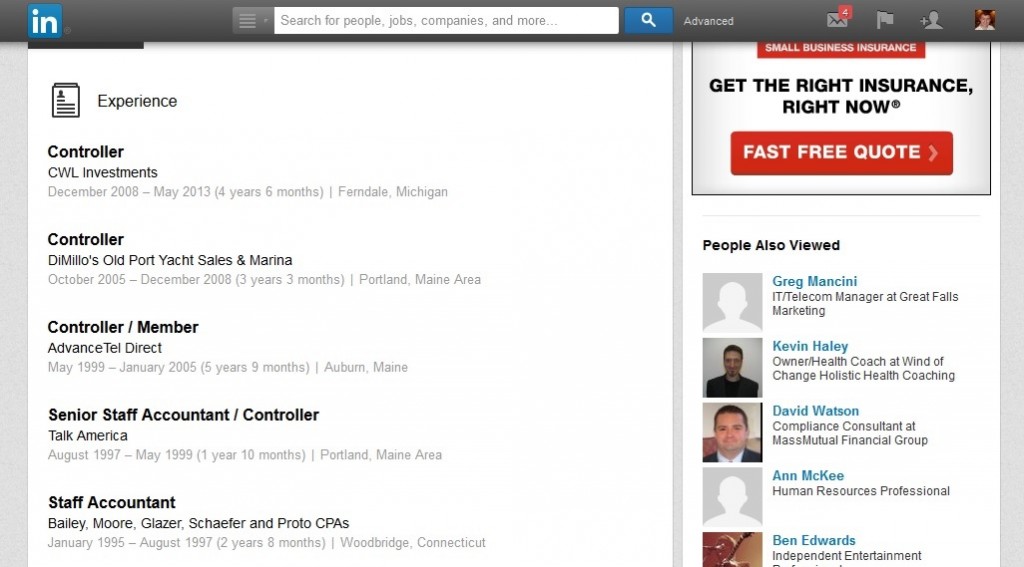 A screenshot of Stanek’s LinkedIn page. The profile itself is unviewable absent a connection to Stanek (via LinkedIn)

On that point, Stanek claims on his site Advancetel grew to have over 1000 employees, but one of the principals in the company James DeWolfe, claims the company only grew to 200 people on his LinkedIn profile.  DeWolfe, who now works at Legacy Publishing, also of Maine, did not return a phone call requesting comment.

Stanek describes himself as an “owner” of Advancetel on his website and as a “member” on LinkedIn.  In legal terms, a member of an LLC, which Advancetel was, is the same as a shareholder of a corporation.  Thus, Stanek may have owned part of the LLC, but not necessarily enough to exercise any control over the company.

Whatever ownership he would have had vanished when Advancetel was administratively dissolved by the State of Indiana in 2008.  Additionally, Stanek did not appear on corporate documents filed with Indiana and Maine for Advancetel or any of its predecessor or successor companies.

Advancetel’s corporate history is long and included names like Powertel and FD&H, organized and reorganized under both Indiana and Maine law.  Great Falls Marketing, which exists today, is Advancetel‘s corporate heir.  Investors from a San Francisco firm, Alpine Investors LP, were typically principals on the companies’ corporate filings.

Attempts to reach some of Stanek’s co-workers to describe his role in Advancetel, including principals listed on the paperwork of the company and its alter-egos both in Maine and California were unsuccessful.

At CWL Investments, Stanek’s role is difficult to nail down.  A woman answering the phone at the Michigan company’s Ferndale offices, after putting WMassP&I on hold, refused to comment.  When asked if they could confirm Stanek’s employment, she declined with “we cannot comment on an employee.”  CWL Invstments, which gets its name from its principal owner Clifford Lunney, is a franchisee of Jimmy John’s—a national chain of sandwich shops—with stores in Michigan and Arizona.

Stanek ostensibly traveled back in forth between Holyoke and Ferndale between his marriage in 2012 and the termination of his employment in 2013 per his LinkedIn profile.  On his website, he describes this as a period in which he trained his successor, often remotely. That successor, according to a LinkedIn search, took over in December 2012, but with CWL’s refusal to comment, any further details cannot be confirmed.

Stanek with wife Amy and son (via Facebook/Stanek campaign)

Stanek’s LinkedIn profile says he was controller of CWL and not, as has been reported, Chief Financial Officer.  The difference between CFO and controller is worth noting.  According to an article on The Houston Chronicle’s site, a controller is a firm’s lead accountant managing day-to-day cash flow, ensuring tax compliance and working with human resources to make payroll.  A CFO, by contrast, handles more sophisticated business decisions often involving risk and strategic planning as well as all finances.

Between CWL and Advancetel, Stanek worked at DiMillo’s Yacht Sales in Portland, Me.  He describes his duties as VP of Marketing and Sales.  A woman answering the phone on the sales floor of DiMillo’s said that none of the sales staff that worked with Stanek was available and the owner, Chris DiMillo, was busy due to boat shows.

Even without the lawsuit in which Stanek is named, Advancetel, then operating as Powertel, also had a default judgment against it from a class action lawsuit.  MyFreeMedicine’s claim may have fallen apart, but a earlier case against Stanek’s company did not.

Starting in 2003, but amended into its current form in 2007, A class action lawsuit was initiated against the company and the makers of a hair-loss drug Avacor.  While the drug is ostensibly legally marketed today, at the time of the case began, the producers were accused of using fictitious claims of studies and clinics that backed their claims of the drug’s effectiveness.

Powertel served in a similar role as it did to MyFreeMedicine, receiving phone calls on behalf of Global Vision Products, the company behind Avacor.  It also placed radio ads for Avacor per California court documents, where the class action lawsuit took place.

Powertel, later FD&H under Maine law and dissolved by Maine in 2005, defaulted in court, ostensibly by never mounting a defense, and sustained a multimillion dollar judgment from an Alameda County judge.  To be fair, the default judgment was rendered in 2007 after Stanek left the company.  Still, the activities that were the subject of the class action suit were alleged to have occurred while he was controller.

If the MyFreeMedicine decision offers any guidance, Stanek’s position as controller, probably, although not definitely, did not include authority to seek, make, or execute business deals with clients.

Still, a controller’s role could be relevant at the firm Stanek worked at briefly before Advancetel, Talk America, which had to seek bankruptcy protection after a series of bad business moves.  Another direct marketing firm, later known as Vital Basics, it also sold supplements and remedies.  As first noted by HUSH, a semi-sarcastic Holyoke blog, this firm actually went into bankruptcy around the time of Stanek’s departure according to his LinkedIn account.  James DeWolfe, who worked with Stanek at Advancetel/Powertel, also worked at Talk America, which could explain how Stanek became involved with Advancetel.

That firm, too, had a problem with drug safety that led to governmental action.  HUSH alleges this occurred during Stanek’s time there, but the final consent agreement between the FTC and Talk America does not confirm this.

Of the other jobs Stanek mentions on his website, there is no apparent paper trail substantiating his role and such positions are not mentioned on his LinkedIn profile.

Whatever his past business experience, Stanek is unemployed as of now, his last job being with CWL Investments.  He has said his family has been relying on his wife’s income as a teacher in Belchertown.  As of the last reporting period, much of his campaign treasury has relied on loans he has given himself.

4 thoughts on “Minding the Business of Holyoke Mayoral Candidate Stanek…”