SPRINGFIELD—In the Walsh household, politics is a family affair. In a room off the main entryway there are photos of Walsh ancestors standing with John F. Kennedy and Adlai Stevenson. While “Walsh” is itself a ubiquitous name in American-Hibernia, this particular family has been rooted in the City of Homes for decades.

At-large Councilor Kateri Walsh married into this legacy forty-six years ago after growing up in Ansonia, Conn. and attending college in Boston. The history contained in photographs and anecdotes stitch her husband’s family into the history of Springfield. Walsh features them with a pride that suggests political water is just as thick as blood for her.

Walsh is seeking her ninth term on the Council over two tenures that spans a period of twenty-six years in an election that is itself historic, lacking the mayor on the ticket. As far as elective office goes, she has eclipsed her husband, who served two terms in the late 1970’s, to become one of the city’s most enduring political figures with both good and bad.

“You are not always going to make everybody happy,” she said reflecting on criticisms she has faced over time. “You ruffle feathers. It’s just part of job description.”

In the course of her political career, Walsh, née Bennett, has inspired strong feelings both positive and negative. Media reports from one of her attempts at partisan office said her opponent’s supporters thought her mean. At the same time, her colleagues on the Council said she was the kind of person with whom you could disagree and then get a cup of coffee.  Still to some she has appeared strident and conservative, but as the city and world have changed, Walsh has mellowed and even inched to the left on some matters. 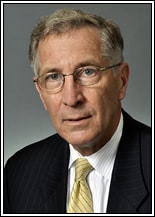 Walsh’s brother William Bennett came to the Springfield area after her and served as DA from 1991-2011 (via dwpm.com)

Like her husband, politics is solidly in her blood as well. Her brother William Bennett was Hampden County District Attorney for twenty years. He arrived in the area after graduating from law school and went on to have a tenure that, on balance, was an improvement over his predecessor, Matthew Ryan.

In Connecticut, Walsh’s family made their mark too. Her father and maternal grandfather were judges. The latter’s wife was among the first women to hold office in New Britain.

Asked why she was seeking reelection, she said the reasons were much like they were when she first ran in the late 1980’s, “I thought back to when I first ran, the same thing is true when I started. Government is about helping people.” She pointed to a recent effort to improve drainage along Barre Street, which had tended to flood during rains.

Her first tenure on the Council ended in 1993 when she took on Mayor Robert Markel. A portrait of that race written by the then Union-News described the frenetic pace of that campaign, often fueled by “a lot of pizza.” After she left the Council, Walsh became a media personality often appearing on Springfield Public Access and WNNZ on the radio.

It was “A nice opportunity to talk about things that they were involved,” Walsh said recalling some of her past guests. She described how E. Henry Twiggs, now Ward 4’s City Council, relayed his experience at Selma, Ala. and a moving interview with Molly Bish’s mother Magi.

Circumstances would lead her to end her media career. Her longtime producer died and Walsh’s children and grandchildren were moving off to Nebraska and South Carolina and beyond. “I didn’t want to make that commitment, I wanted to be able to visit,” she said. At that point, she had already resumed Council service and those duties, as well.  Having both would make her and her husband’s travels more difficult. 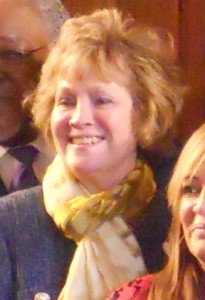 She had returned to the Council after a ten year hiatus from elected office. She had attempted a write-in campaign a few years earlier, but this time had gone all in, in a better position than during her last tenure she says. “When I was first on the Council my kids were young.” In 2003, “It was a much more settled time in my life.”

It was not a more settled time for the city, however. Beacon Hill took over Springfield’s finances and gave them to a Control Board, regardless of the city’s wishes (then-Mayor Ryan supported the move). “I never liked the idea of giving up local control,” Walsh said, but made the best of the situation when she, as Council President, joined the Board in 2007 and began pushing for public speak outs at Board meetings.

Budgets are again tight, but Walsh said the process has become a bit more transparent, but she would certainly accept more of a role for the Council. “The more you give ownership, the smoother it is,” she said of the process Asked how her relationship with Mayor Domenic Sarno is, she replied with a cool, “Excellent.”

The Council has also changed during this tenure. Walsh is careful not to imply that the city was represented unfairly before, saying “I never felt that the at-large government did not represent the entire city.” She observed higher turnout has not materialized either with ward reps, but she said she supported the switch to broaden the universe of people in city government.

Like most candidates, job creation is high on her list of priorities. She touts projects like F.W. Webb, but such efforts alone are not enough to revive the city. To Walsh’s credit, she has taken a lead role on the Council to establish Cultural District in Springfield.

The Springfield Armory and Quadrangle would anchor the Cultural District’s Upper State Street end. (via wikipedia)

Business and cultural leaders have pushed for the district’s creation to qualify for support from the Mass Cultural Council. With the Armory and Quadrangle so close, it was a surprise the city had not established one sooner. It is not a panacea for the city’s economy, but it could lead to a shift away from a reliance on massive cure-all developments.

Cities in Hampden County and, in fits and starts, Holyoke have begun revivals that began around the arts. Walsh says she has an appreciation for what the arts can do and not just because her mother taught the subject and her sister leads the Art Department in Cambridge. “It is a way for people to express themselves” and “To see people’s talent, to see what young people can do.”

Walsh, who did vote for the casino pact with MGM, is no blind optimistic about what a casino can do. “We have to be realistic about what will be happening in the city of Springfield,” she said of the city’s job prospects, particularly for young folks and families. While some of her children have careers in city—one daughter works for the Parks and another is a paraprofessional in the schools—some of her kids have gone elsewhere for work.

Public safety, too is in the mix. Walsh wants to see the cops get more resources, but has also picked up on the idea of reviving the Police Commission. “I don’t think a lot of people feel comfortable approaching the police with concerns,” she said, but adding, “It is reassuring to see the police,” as a basis for expanding police resources.

The next term, Walsh also wants the city reevaluate its busing contract, a $23 million obligation supported on the non-school side of the city ledger and she has been in talks to consider adding an e-library to the closed Liberty Branch library. 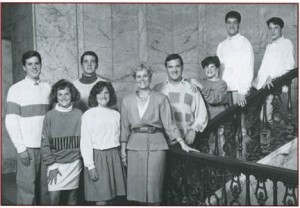 Politics are still a family affair for Walsh. Her husband, daughters and nephew, have helped out at standouts and campaign events. It is not quite the full-blown effort it was like it was back in 1992, when her children filled out various roles for her campaign for Congress. Son Daniel (IV), served as press secretary, his siblings directed volunteers.

Earlier in the interview, Walsh said with a hint of melancholy that her son Michael often attended meetings earlier in her political career and was always eager to help out her campaign. Now an attorney, he works at the Nebraska Department of Revenue.

Perhaps the emphasis on the next generation in Springfield is not just idle rhetoric from a seasoned pol like Walsh. “You want Springfield to have the kind of opportunities [so that] people come back here,” she said.