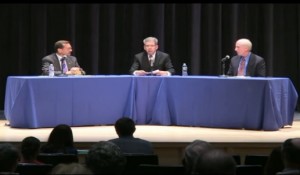 EASTHAMPTON—Crossing swords for the second time in the remarkably short primary campaign, Easthampton Mayor Michael Tautznik and Holyoke Ward 3 Councilor David Bartley displayed the choice Democrats will have in next week‘s special primary election.  Monday’s 90 minutes debate at the high school here, organized by Easthampton Community Access TV and Easthampton Democrats, was one of the higher profile events in the otherwise quiet sprint to the primary that precedes the general election to replace Mike Knapik.

The race to succeed Knapik, who resigned in August to take a job at Westfield State, has been a sprint with its five week primary and only month long general election campaign.  On the other side, Republicans must choose between Westfield Rep. Don Humason and Mike Franco, a perennial candidate and investigator in the Holyoke Veterans Department.

Monday’s debate drew some contrasts between Bartley, a first term councilor and son of a former State House Speaker and Tautznik, the only mayor Easthampton has ever had.  Moderated by veteran Valley journalist Ray Hershel of WGGB, debate topics ranged from qualifications, taxes and the recent controversies out of Westfield State University. 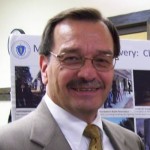 The candidates emphasized their public service careers.  Tautznik highlighted his work on local and regional matters, “Seventeen years as mayor means I have respect in Boston and in the Valley,” Tautznik said.  Bartley highlighted his work as councilor and as an attorney.  “I‘m running to be your voice,” he said.

Both decried Westfield State President Evan Dobelle’s spending.  Tautznik emphasized it was too soon to label Dobelle’s behavior illegal, but said that the Board of Trustees and their auditors deserve scrutiny for missing Dobelle‘s alleged profligacy.  On taxes, both Bartley and Tautznik agreed that the legislature repealing of the so-called “Tech tax” was appropriate.  That item would set the stage for where the candidates began to diverge.

Again there was agreement on the need for more state aide to cities and towns.  Tautznik said he could see from his vantage point in the mayor’s office what years of local aide cuts had done to community budgets.  However, he emphasized that the path to restoring those cuts was not through additional taxes, but rather boosting jobs which would in turn bring in more tax revenue.

Bartley took a different tack, employing anti-Beacon Hill rhetoric and tone that would reappear throughout the evening.  He cited overall state budget growth at a time when local aide was being consistently cut.  At one point, Tautznik noted that while that disparity was a problem, part of the overall budget growth was driven by implementation of the commonwealth’s universal healthcare law.

It is hard to know exactly whether Bartley’s more populist, if demagogic tone, was a deliberate appeal to anxious western Bay Staters, or a function of the differing political environments of the two candidates.  In Easthampton, a Hampshire County town turned city, a successful push into the creative economy has left a much different electorate than a traditional old city like Holyoke, often driven by identity politics.  Bartley’s tactics have appeal and, indeed merit, in Western Mass.  But his use on bordered divisive and did not, as anti-Boston complaints do when used effectively, list concrete grievances.

While Bartley may have relied on anti-Boston jabs a bit more than Tautzik, both candidates highlighted areas where the state has failed to adequately consider municipalities.  The formula for Chapter 70 educational aide fell under criticism from Bartley.  Tautznik faulted the state for under funding special education and defunding school transportation budgets. The Mt. Tom power plant in north finger of Holyoke also made an appearance.  Bartley, answering first, navigated the pitfalls of offending plant workers or environmentalists, both of whom could be pivotal in a low turnout election like this.  He suggested that coal plants are becoming less practical in today’s economy, but that he would not sign onto a premature shutdown of the plant, also noting its place on the tax rolls.

Tautznik took the opportunity to note the growth of solar energy in Easthampton and noted that the Mt. Tom was decreasingly useful for baseload electricity, which historically is what coal plants were used for.  He, too cautioned, about rushing to close the plant, however, because the plant’s site, likely heavily polluted could be difficult to reuse.  Instead, he suggested it could be used to install free-flow turbines in the Connecticut River to provide electricity without the use of a dam.

A question about outreach to the Hispanic community, prominent in Holyoke and on the rise throughout the district’s cities, elicited from Bartley “I would not have gotten elected if not for Spanish-speaking voters.”  He noted his support from Holyoke Ward 1 Councilor Gladys Lebron-Martinez and Ward 2 Councilor Anthony Soto.  Tautznik said his campaign was actively seeking support and volunteers from the Hispanic community.

The bases of both Bartley and Tautznik will be critical and, despite Holyoke’s larger size, will probably shake out to be about equal given turnout patterns.  “There is something to the idea to have the hometown guy,” elected in the district, Rep. Aaron Vega of Holyoke said in an interview the day before the debate.  Were Bartley (or Republican Franco) to win the seat, he would be the first Paper City resident senator in over twenty years.

Vega observed that both candidates had been working very hard, but that Bartley’s name recognition was a huge asset.  Asked about Bartley’s attempted run in 1994 when he lost the nomination to now Chicopee Mayor Mike Bissonnette, Vega said the district has changed.  Bissonnette would end up losing that senate election to then Rep. Knapik.

Conversations with other Holyoke observers suggest it is not clear the ward councilor has consolidated support in his own city.  Stepping up from a ward council seat is a large leap, but one made easier with his name recognition.  Sources elsewhere in the southern end of the district, like Westfield say that many Dems are hanging back, waiting for general election to back the nominee.  The same sources did observe signs and campaign activity from both candidates, however.

Bartley is getting a boost with a public endorsement form Hampden County Sheriff Michael Ashe today and in Agawam, he had already gotten the backing of former Rep. Rosemary Sandlin.  No other names, but observers have sensed an establishment move toward Bartley.  For his part, Tautznik gained endorsements from mayors across the commonwealth and several legislators last week.

Back at the debate, the contrasts in style and policy piled up as time went on.  Despite an admonition to the audience from Hershel early on, Tautznik received the night’s only mid-debate applause line when he categorically backed a woman’s right to choose, calling personal health decisions not a matter for the government.  Bartley, by contrast, described himself as personally opposed to abortion and that Rowe v. Wade is the law of the land.

Beacon Hill, the place both candidates want to go, was a frequent target in the debate (WMassP&I)

Hershel brought the conversation back to the Tech Tax and ways to fund transportation.  Tautznik said that although he felt tax rates for the most part need not go up in the commonwealth, the strategies employed by the legislature were generally in the right direction. To plug the hole from the Tech Tax repeal, he suggested repealing obsolete tax breaks, citing the recent repeal of property tax breaks for telephone wires.

Bartley took the opportunity to poke at Humason’s claim that he had succeeded at repealing the Tech Tax, but then inveighed against reinstatement of tolls along the turnpike from Exits 1 through 6.  Tautznik reminded Bartley of expensive projects on tap for the region including the inevitable replacement of the I-91 viaduct in Springfield.

Bartley countered that the reinstated tolls are slated for Pike repairs on the Western turnpike, which the state categorizes as west of Route 128.  Tautznik admitted that this was a problem, but that the region’s representatives ought to change the definition rather than leave repairs unfunded.

The Massachusetts Turnpike at Exit 15, the entrance to the Eastern End a.k.a. the Boston Extension of the toll road (via wikipedia)

Bartley’s overall portrayal of Boston’s actions as materially and neglectfully harmful of the Western section of the commonwealth culminated with a claim that increase tolls, for example would harm the region’s economy.  He said the draw of tourists from the east would be retarded by the reinstated tolls whereas most Eastern Mass highways other than the Pike are not tolled.

Tautznik countered that advances like open road tolling could be employed on roads in the east to mitigate that disparity.  However, the Easthampton mayor also noted that what is more important is maintaining the region’s North-South infrastructure.  “You have set aside that money.  You can’t imagine it will fix itself,” Tautznik said.

The region is more economically tied to Hartford, than to Boston the mayor added.  Bartley scoffed at this assertion saying that the region owes more to Boston than to Hartford economically.  “If you don’t think Boston is our biggest market, you don’t know Massachusetts very well,” Bartley said before reiterating his opposition to the tolls.  “Let’s not let them [Boston] have it initially” and “if it’s necessary let’s argue for it.”