Only a week out from Election Day in Springfield and throughout the region, there is precious little time other than Wednesday’s big debate to make news.

Luckily in the past week, there is just enough Council news to worth a brief mention.  The Republican had made note of pawnbrokers campaign contributions prior to last week‘s meeting.  However, not forty eight hours after successful killing a new effort to regulate pawnshops, Margaret Sarkis, the wife of a pawnshop owner donated at-large Councilor Jimmy Ferrera, the maximum amount allowed under law.

Today, the Council approved a moratorium for medical marijuana dispensaries.  The move came after a somewhat passionate meeting in which advocates for palliative pot opposed the moratorium while city planning and health officials backed it.

With three councilors, at-large Councilor Tom Ashe and Tim Rooke and Ward 1 Councilor Zaida Luna absent, the change would need nine of the 10 present councilor to approve the moratorium, which would last until June, 2014.

Ward 8 Councilor John Lysak argued that between the need for patients in pain and the circumstances of regulating only one type of medication, the moratorium should be as brief as possible.  He proposed shortening the moratorium to only 90 days. 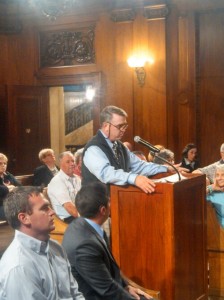 Deputy Director of Planning Phil Dromey pushed back saying that with Thanksgiving and Christmas holidays, a 90 day moratorium would likely yield nothing.

Opponents of the moratorium, a group of unions and medical marijuana advocates urged the Council to adopt an amendment of their own that would repeal the moratorium and essentially establish regulations immediately.

Most councilors did not seem receptive to this approach, preferring to give city officials time to write regulations.  At-large Councilor Kateri Walsh seemed sympathetic to patients in need of the medication.  At that point Health and Human Services Commissioner Helen Caulton-Harris, noted that the state regulations had a hardship exemption for those who could not access medical marijuana from a dispensary.  Caulton-Harris noted that this exemption, which allows qualifying patients to grow their own cannabis, is unique in the country.

The debate also touched on the need to develop regulations in light of concerns of Springfield share’s of services serving poorer populations, but also in terms of impact of a moratorium as to competition of facilities.  The latter, Dromey said, is unlikely to be much of a problem as many communities have moratoria while they write regulations.

Ward 5 Councilor Clodo Concepcion, apparently neglecting that this proposal would prevent the immediate opening of dispensaries, moved that the item go to committee to get public input.  He declared that he did not want any of these dispensaries in Springfield, although the Attorney General’s office has opined that such broad permanent bans are illegal.  When informed as to what this proposal would do, Concepcion still called for its to go committee, but the motion failed for the lack of a second.

In the end, the Council defeated Lysak’s 90 day amendment 8-2, with only Lysak and Ward 2 Mike Fenton voting favor.  Lysak was the sole no on the final vote for a moratorium, which passed 9-1.