Hurst Campaign a Bid for Springfield’s Next Generation..

SPRINGFIELD—For years demographers and policy makers have raised concerns that Massachusetts’s third largest city and its region is suffering from brain drain.  Its best and brightest were packing up and moving on.  As bad as that problem was, its families, too were increasingly eschewing Springfield for the suburbs, if they stayed in Hampden County at all.

While there is reason to believe that the bleeding of young people is not as profuse, it is nevertheless reassuring for some that candidates like Justin Hurst have emerged in recent years to contest Springfield’s elections.  “The same people who are office when I went to college and I came back eight years later,” Hurst said.  “People start to become complacent in their positions.”

Hurst is not the only politician in the family.  He is himself the son of Frederick and Marjorie Hurst, both whom have been active in city politics.  Marjorie served on the School Committee until 2009 and Justin Hurst’s wife of five years Denise, is currently running for reelection to an at-large seat on the Committee in a tight race.

Hurst’s parents also own The Afro-American Point of View, a newspaper geared toward the city’s black community.  The paper came up briefly in Wednesday’s debate when candidate Jeffery Donnelly lobbed an awkward charge at Hurst that his parents were using the paper to help their son.  Hurst claimed and campaign records confirm that Hurst has paid for campaign advertisements appearing in the periodical.

Hurst with his wife, Denise, mother-in-law and Mayor Sarno (via Facebook/Hurst campaign)

With all of the incumbents running this year, getting onto the Council will not be easy.  Nevertheless, city political watchers rate Hurst’s chances very well.  He ran in 2011 and placed sixth.  While his family has had disagreements with some in Springfield’s African-American community as of late, he (along with his wife) has picked up support from the likes of Mayor Domenic Sarno, Rep. Coakley-Rivera and several councilors.

A graduate of the University of Virginia and Western New England’s School of Law, Hurst taught in the public schools and administered a major federal reading grant early in his career.  He also co-owns an investment group that deals in real estate and rental property, “Sometimes we sell and sometimes we hold onto properties,” Hurst explained during an interview at the Starbucks on Columbus Avenue.

When his mother decided to retire from the Council, Hurst, then working for the schools, had considered the seat himself, but would have had to give up his job to run.  Instead, his wife Denise ran.  “She thought that would be a good fit,” Hurst said.

Hurst and his wife married in 2008 and have a two-year old son.  They reconnected years after they both attended Central.  He was on the football team and she a cheerleader, but they did not have much contact then.  Hurst says he was not exactly the team’s star then.

Now a candidate in the city’s first election without a mayor on the ballot, Hurst is looking to reinvigorate the Council with a focus on public safety and laying the groundwork for young families like his settle here and grow.  The existing leaders do not appear able or willing to make the changes the city needs to make those conditions for others.

“While [elected officials] maybe came in with great ideas, they become stale,” after a while Hurst said lamenting that little to no effort is made to sow the seeds for the next generation.  This charge has been vigorously disputed, however, and is in part the source of the disagreement between Hurst’s family and others.

“We tend to reactive as opposed to proactive,” Hurst said of elected leaders in the city.  The city  needs to look beyond its borders and take in the best ideas to revive itself rather than waiting for salvation to come from outside.

In terms of bringing more families into Springfield, Hurst said encouraging market rate housing necessary, but hardly sufficient step.  “Families find themselves isolated,” he continued.  “There was a time when my neighbors were the equivalent of my parents,” but that those conditions no longer seem to exist.  Churches, community centers and programs under the mayor need to step in and help rebuild that sense of community.

Hurst also suggested that politicians in the city need to be candid with residents and “find sustainable solutions that have long lasting impact as opposed to quick fixes or news coverage.”  He points to public safety as an example, “What were we doing in the beginning of May when we are preparing for the peak violence,” and if anything was done he added, “Why doesn’t the public know it?”

Hurst also shared the frustration of candidates like Ernesto Cruz, who note that the city’s digital outreach is woefully inadequate.  “Making sure all of our departments have a working website that is updated is important,” Hurst said noting that citizens often cannot find accurate or timely info on the site. 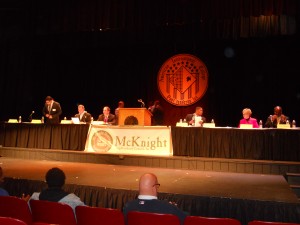 Success for Springfield will require a bit more than participation.  Part of it will be identify and selling the city’s assets and value.  “I’m a bit guilty of it myself,” Hurst said admitting that sometimes he can miss some of the city’s bright spots.  “I think people need to educated as to what the benefits and that will attract people to the city.”

“We’re struggling to play up residency,” Hurst said, but “If we find ways to make our city attractive people will want to come.”  Hurst publicly supported the ordinance revisions Ward 2 Councilor Mike Fenton had proposed and Sarno vetoed, but not proposals from at-large Councilor Jimmy Ferrera, which would almost certainly exposed the city to expensive litigation and fail in its policy objectives.

The campaign, while muted due to a near media blackout, has had its share of sharp elbows.  Tension clearly existed between Hurst and councilor Bud Williams at Wednesday’s debate. Hurst had inquired of Williams’ position on pawnshops (he is opposed, Hurst backs at-large Councilor Tom Ashe‘s reforms) and Williams tried to quiz Hurst on budget minutiae.  Still Hurst says he is interested in getting something done and not letting the Council collapse into a conflict of personalities, “You are not going to agree with everybody on everything”

“You should be able to have a good dialogue that produces results at the end,” he said.