Ward 1 Challenger Claudio Says His Focus is on Future Generations…

SPRINGFIELD—Despite limited exposure, the Springfield municipal election features some fierce races both among at-large and ward candidates.  The North End-Downtown based Ward 1 election is probably the race ripest for an incumbent defeat and centered in a place where some of the city’s most potent woes are on display.

The ward’s councilor since  2010, Zaida Luna, is facing a stiff challenge from the Chief Operating Officer of New North Citizens Council, Inc., Jose Claudio.  He also served as the agency’s Media Relations director.  A resident of Springfield for much of his adult life, his campaign has attracted  high profile support form across the city and from within the ward itself.

“My job as a leader is…to stand up,” Claudio told WMassP&I explaining what he sees his role as a councilor and a member of the community.

Claudio, born in Puerto Rico, has lived in the city since he was a child and raised his own family here.  A graduate of Commerce High, he got a degree in Christian theology in Hartford and held a fellowship in urban studies at MIT.

He said he got his start in neighborhood work after he was taken under the wing of Barbara Rivera, the late long-time executive director of New North and also the mother of Rep. Cheryl Coakley-Rivera.  In addition to working at New North, Claudio also served as a mayoral aide under Charles Ryan.

In 2011, Luna faced a write-in campaign from Maria Perez, another figure associated with New North.  Although Luna won overwhelmingly, more write-in votes were cast in low-voting Ward 1 than in any other ward race that year.  Attempts to schedule interviews with Luna have thus far been unsuccessful.

This time around, Claudio decided to launch a challenge against Luna along with Miguel Rivas of the Brightwood neighborhood and Stephen Daly, a resident of downtown.  Claudio topped the preliminary with 42% of the vote.  Luna got 38%.  While second-place candidates have come back from preliminaries in Springfield to win the general, Claudio also scored the endorsement of Daly and Rivas.

In an email to WMassP&I, Daly said Claudio was the best candidate and they shared similar platforms, “I am actively encouraging everyone that voted for me to vote for him.”

While Claudio has also gotten a great deal of support from across the city, Luna has been said to have a potent ground game.  Additionally, she may be able to gain ground by virtue of her oft-noted constituent services skills. 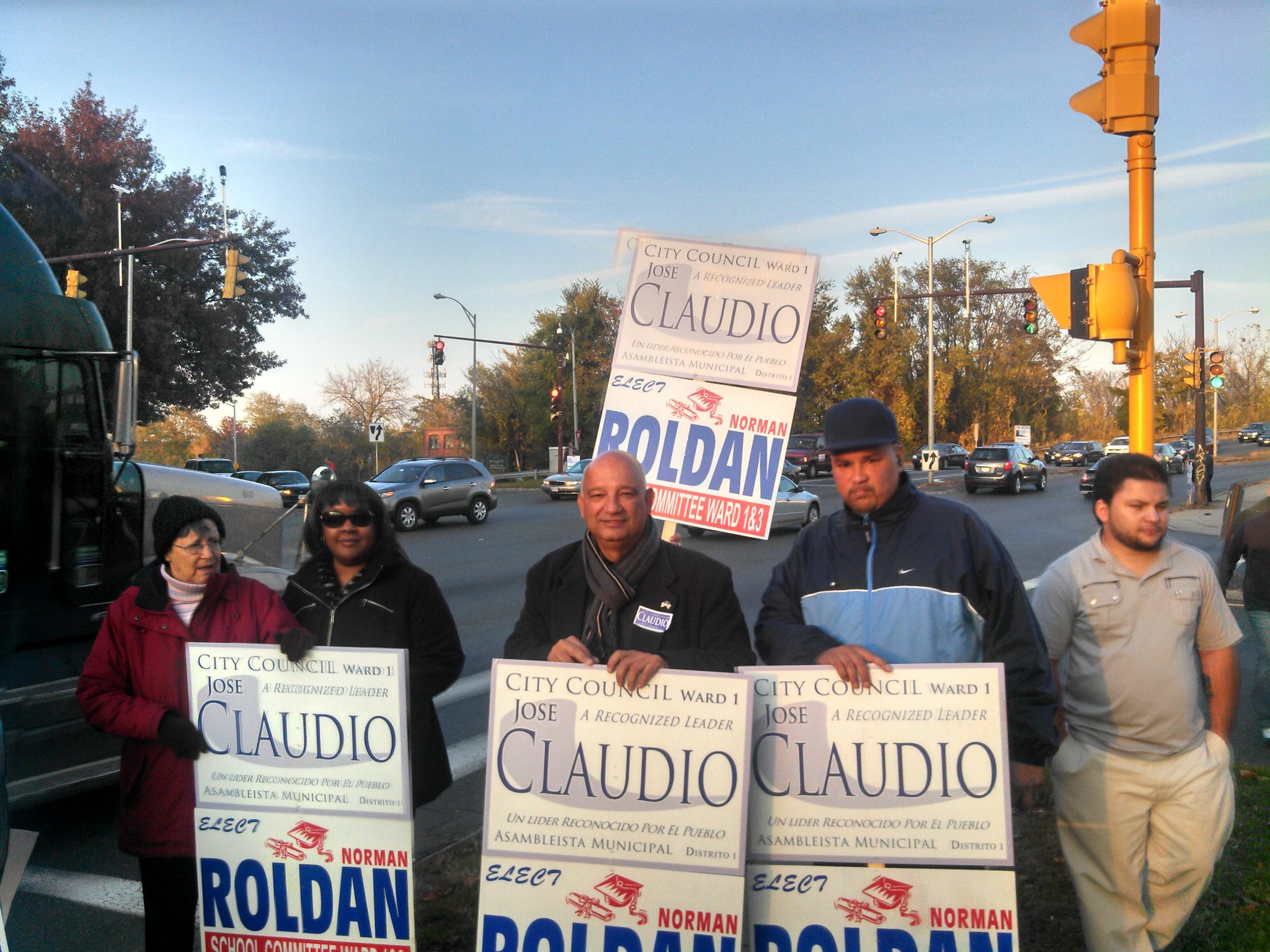 Claudio and volunteers during the standout following his interview (WMassP&I)

During an interview before one of Claudio’s standouts near the approach to the North End bridge, the candidate spoke about his work in the North End and across the city, but avoided any direct hit on Luna.

Instead, he spoke a bit more generally about how he would approach the job as councilor, such as, for example, working with neighborhood , “You need to go to meeting and you need to see what the needs are.”  One example he cited was meeting with the Armoury-Quadrangle Association to decide what the fate of the area leveled by last year’s gas explosion would be.

Daly, was a bit more pointed, “I feel Luna is a very sweet lady but has been very ineffective on the City Council in her last two terms.  It is time for a change.” He went on to cite her tendency to send things to committee, and implied a failure on her part to use her seat on Public Health and Safety effectively to deal with the ward’s crime.

However some have raised concern about Claudio’s relationship with New North, which has received indirect criticism from those outside the organization in the past.  “One of the things is that people have a perception,” Claudio said.  New North is actually two entities: one an actual neighborhood council, the other a social services agency.

The social services agency, Claudio said, services individuals across Hampden County and Western Massachusetts.  “We educate people, we help send a lot of people to college,” Claudio said listing some of the group’s activities.

The neighborhood council is quite different, he said.  “It is an elected board,” with  “elections every May. Every two years the board changes,” Claudio explained.

Mayor Domenic Sarno has also been a big supporter of Claudio’s.  Asked if he could defy the mayor despite his backing, Claudio seemed unequivocal.  “Me and the mayor have gone at it at times,” he said suggesting that serving on the Council would be no different.

As far as what Claudio wants to do, he mentioned again his idea of a Springfield Terminal Police, based around Union Station upon completion of its renovation.  However, he clarified that it would not a unique entity, but rather a detail within the police department.  The unit would fan out from the station and cover the entire downtown and work in concert with Amtrak police, who “cannot go outside the terminal zone.”

In an interview with La Voz, Claudio had also expressed an interest in educational police.  Asked what he would do on the Council in this area since educational policy is largely the province of the School Committee, Claudio said, Council can “Make sure that we can help in any way that I can.  Whatever help we can give.”

Claudio cited the fact that operations like busing and school building are on the city side of the budget and therefore the Council has more of a role.  He also sits on the city’s school building committee and chaired the search committee for a new superintendent that eventually picked Daniel Warwick.  “I really wanted somebody locally that was qualified,” he said.

Ultimately, Claudio appeared eager to sell himself not as an insider or rigid ideologue, but somebody more interested in going where the facts lead.  “I’m a researcher,” he said.  He cited the pawnshops ordinance that at-large Councilor Tom Ashe has been pushing as an example, citing the oft-noted point that folks on vacation may return after the 10 holding period has lapsed.

He backs a return of the Police Commissioner (and the Fire Commission too), but only “If it comes with a bite.”  He noted that presently almost all power is concentrated in the commissioner and this would have to be changed to make a commission worthwhile.

Claudio emphasized that his goal would be the health of the city as a whole with an emphasis on Ward 1.  Certainly he would have a role as the councilor from the city’s most predominantly Latino ward, but that would not be the overriding factor.  Still, those issues will feature prominently given the problems of drugs, poverty and joblessness in the ward.  “I live here 24/7.  I see what goes on 24/7,” he said.

The North End is still in flux as Dominican immigrants gradually replace Puerto Rican ones and Claudio claims he has a good relationship with individuals and groups within and that service that community.

As if anticipating concerns that he may hold the seat for as long as he wants it, he offered his belief about laying the ground work for the next generation, “You need to think about your future.”  He insisted that he did not want to hold the office for any more than two terms or so, “Let me have those two years to show you what I can do.”

Beyond that, Claudio wants to line up others to have a part. “I live to bring people together,” and set the stage, he spelled out, “for them to come in and take the lead.”