UPDATED 4:26PM: For a CORRECTION: A prior version of this story described former Mayor William Sullivan as both not alive and from the district. He is in fact alive, but no longer a resident of ward 2.

Rep. Sean Curran exits, will a stampede begin? (via malegislature.gov)

It appears Springfield could be in store for one of the most dramatic turnovers in its delegation to Beacon Hill in recent memory.  More local legislative news may be in the offing, but Rep Sean Curran’s decision to retire, first reported by Masslive, sets up another scramble for one of the city’s most sought after elected offices. A statement by Curran’s committee today repeated key details in Masslive’s story.

On balance, Curran’s decade of service on Beacon Hill has been uneventful although not lacking in integrity.  He is probably best known for defeating former State Representative Christopher Asselin in 2004 after the latter was engulfed in a widening scandal involving the city housing authority.  Asselin placed third behind then Springfield City Councilor Rosemarie Mazza-Moriarty.  Curran handily beat back an attempted Asselin comeback in 2010, after the one-time rep was released from prison.

Curran was a frequent presence at political events and served without much overt criticism.  His statement mentioned several accomplishments including several economic development projects, and the Control Board, created the year before he took office.  The 36 year-old Democrat’s had his detractors, but those stories are for another time.

Curran’s seat in the House, the 9th Hampden District, has been among the city’s most coveted for years.  Legendary (or infamous) political names like Athan Catjakis and Dennis Murphy, held the seat. Sean Cahillane, a figure in city politics who has made sporadic bids for office, held the seat as a young man for two terms in the 1970’s before losing it in a primary, when it was the 11th Hampden.

Insurance agent Jack Keough briefly held the seat after a tense special election in 1999 brought on by Murphy’s resignation.  He defeated Nick Fyntrilakis, then a Springfield School Committee member, and Asselin, both former Murphy aides.  The race was painfully close and in the telling of observers with long memories, like the libertarian-minded Tommy Devine, descended into a slugfest and accusations of vote-rigging.

Fyntrilakis would go on to rise up in MassMutual, currently holding a Vice-Presidency for public and community relations.   He is also a co-chair of Develop Springfield, an effort aimed at recovery after the 2011 tornado.  Keough, unable to hold out one-on-one lost to Asselin in the 2000 primary.  In all cases, the general election was won by the Democrat on a walk.  Dennis Murphy is now a political consultant.

If any theme exists in this electoral history it is that virtually all of the political action over the last three decades has been in the Democratic primary.  Its center is Ward 2, which is the historically Irish (read: Democratic) heart of the city.  In addition to the above reps, figures like, Mazza-Moriarty, US Rep. Richard Neal and the first Council ward rep in fifty years, Mike Fenton, hale from this ward and its state rep seat.  Today it includes Dem-friendly parts of 16 Acres (Ward 5) and Chicopee.

The seat may have always been this valuable, but its stock has only risen over time as seats like it have faded away.  Heavy Democratic areas like Wards 6 & 7, while boasting high turnout and political clout, never really had a seat quite like this. Either they belonged to seats districted in with Republican leaning communities (and hence were not Dem safe) or were so divvied up that the neighborhoods within in them could not really identify with an individual seat as a whole.

Meanwhile, seats similar to the 9th Hampden were lost over time.  There was the demolition of Paul Caron’s old 16 Acres based seat after 2000. The 10th Hampden’s transitioned to one intended for a Latino (although last year’s redistricting could short-circuit that) and the 11th Hampden, despite its odd East Forest Park precinct, seems geared for a black rep.  This leaves the 9th Hampden as a unique place.  Here, white Democrats can lean effectively on identity politics and win.  Although that by no means excludes minority candidates provided—fraught as this statement is—they are upwardly mobile and therefore socioeconomically accepted as white.

It goes without saying that politically affluent Atwater Park, where the congressman lives, could produce a candidate.  The neighborhood’s second most prominent presently elected resident (albeit a new one), Fenton, is a possible candidate, but a run seems very unlikely.  He is a player in Treasurer Steve Grossman’s gubernatorial campaign and balancing that, the Council presidency and a partisan run could prove politically difficult.  Fenton did not respond to requests for comment as of posting time.  Still, Atwater Park could easily find somebody. 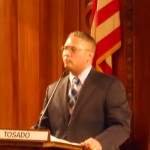 Sources familiar with the thinking of former City Councilor Jose Tosado, who resides in the 16 Acres section of the district, said he was “looking at the race very seriously.”  Tosado could not be reached for comment directly as of posting time.

Some sources had predicted a Curran retirement some weeks ago and mentioned School Committee member Peter Murphy who represents Wards 2 & 8.  City Hall sources have said for years Murphy might be looking for a political promotion.  He has been described by several sources as poised to run.  However, Murphy, despite winning by a healthy margin last month, has not exactly been a luminary on the Committee either in public like outgoing member Antonette Pepe or behind the scenes like Chris Collins.  Unlike a promotion to the Ward 2 Council seat, however, Murphy would need to expand his name recognition into 16 Acres and Chicopee.

Finally, chatter that School Committee member Denise Hurst may launch a bid too has bubbled up very quickly, despite some sources previously discounting her interest.  WMassP&I erroneously identified Hurst and her husband, Councilor-elect Justin Hurst as residing in the 12th Hampden.  They, in fact, live in the 9th Hampden.  Reached for comment, Hurst said she had not made any “concrete decision,” but her family and she “are thinking about this opportunity.”  Hurst came in first for reelection last month.

Accoridng to Chicopee sources, the district’s one precinct there has no standout potential candidates.  An otherwise obvious figures, like Rosemarie Mazza-Moriarty, has decamped to East Longmeadow and a few activists who insisted on anonymity are taking a pass.  One cannot rule out another comeback by Asselin, though establishmentarians and reformers alike would almost certainly work to stop that.

If Candaras leaves the Senate, Puppolo seems likely to run for her seat. Unlike in the 9th Hampden who would seek Puppolo’s seat, the 12th Hampden, is in doubt (via Twitter/Puppolo campaign)

The list may seem short, but the district has a much deeper potential well of candidates than the 12th Hampden, which may open if Angelo Puppolo seeks Sen. Candaras’ seat.  With ward representation sapping East Forest Park of its Council dominance and the providence of redistricting locking three of Ward 7’s resident councilors out, the city offers Democrats few obvious successors to Puppolo.

While Republicans have found winning the 12th Hampden near impossible since Candaras claimed it in 1996, they would have a realistic shot at the seat.  Not so with the 9th Hampden.  While it is remotely possible Republicans could dig up a credible candidate, the dynamics are unlikely to work in their favor.

Using last year’s US Senate race as a model, under which Republicans had ideal conditions to be competitive in the 9th Hampden’s precincts, Scott Brown did well in some areas relative to Springfield as a whole.  Yet, in none did he exceed 45%.  Elizabeth Warren crushed Brown in most of the district’s precincts, including many with high turnout.

That said past candidates like perennial candidate Robert Underwood, who has run in the election as an independent, could enter.  However, the chance of a Republican or otherwise non-Democrat succeeding here seem remote.

In any event, the potential candidates have a head start to begin raising money and getting political ducks in a row.  For some who saw Curran as an effective means to dispose of a problem like Chris Asselin, the planning for Curran’s successor may have begun long ago.  However, even here in one of the epicenters of establishment power, Springfield is a changing city.  The old order’s grip may have grown arthritic.