UPDATED 4:20PM: For a new link, grammar and clarity. 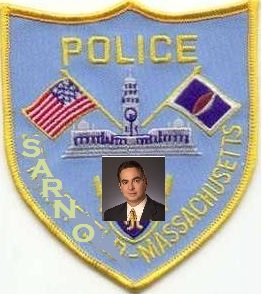 Everyone knew a changing of the guard on Pearl Street was coming, but the swiftness of Mayor Domenic Sarno’s announcement that he would be selecting a new Police Commissioner from the ranks of the city’s deputy chief likely caught a number of people off guard.  If fulfilled as the mayor laid out, it would deal a serious blow to efforts to reinstate the Police Commission and forestall any serious efforts to reform the leadership structure of Springfield’s Finest.

The Republican reported Friday that Sarno was beginning an interview process with the city’s three deputy chiefs to pick a successor to Police Commissioner William Fitchet.  The deputies are John Barbieri, William Cochrane and Robert McFarlin. Selected by the Control Board after a brief search process, Fitchet has served as the city’s top cop since 2008.  His contract was to end last year, but Sarno extended it about fourteen months putting his retirement sometime this spring.

Overall, Fitchet’s tenure as Commissioner can best be summed up as mixed.  Some initiatives have borne fruit, but problems remain and the response has been either headline grabbing anti-insurgency tactics or efforts to remake segments of the city’s economy rather than change the department.  Whether they have actually worked is up for debate

Some issues are not necessarily Fitchet’s fault.  Supporters of his (and opponents of reviving the commission) point to recent declines in the Police Department’s ranks.  However, the shrinkage among the Police has been nowhere near as bad as the Fire Department.  Thus some crime issues may be due to less cops, but what can be as important, if not more important, is how those cops are deployed.

Minority relations have not been wonderful either.  Fitchet retains disciplinary power under city ordinance and the terms of his contract.  Groups in the city unsatisfied with the lack of civilian oversight of the department pushed for a review board a few years ago.  Sarno established a civilian review body, but it lacked the teeth of legislation.  Situations like Jeffrey Asher-Melvin Jones seemed to highlight problems.  Asher ultimately was fired and served time in prison for the incident, but tried to collect a disability pension.  Jones’s own legal troubles complicated his role as the face of poor minority-police relations.

Ward 4 Councilor E. Henry Twiggs had led efforts to legislate a review board a few years ago. (via Springfield Democratic City Committee)

The City Council tried and failed to add some legislative heft with an ordinance, but it failed in the face of Police opposition and complaints it would not immediately restore civilian control of discipline.  The latter would have been legally impossible, as Fitchet’s contract did, and ostensibly still does confer such powers to him and changing the underlying ordinance would constitute a breach.

Things are a bit different now.  The Patrolmen’s Union has softened its opposition to the return of a Commission.  Rank and file complaints are said to be on the rise, but there is no forum for their grievances.  It is hard to ascribe these conditions to merely budgetary concerns.

Given all of these concerns with the Fithcet era, a national search might make sense.  Early critics of Sarno’s move like the NAACP’s Rev. Talbert Swan and at-large Councilor Bud Williams agreed.  Williams had joined the chorus of Council candidates last Fall calling for a new Commission, but the paper only noted Williams’ call for a search.

On balance, the idea of a national search may leave a bad taste in residents and leaders’ mouths.  After all, the last national search for Police Commissioner (the search process that picked Fitchet was really more of a quickie than a full-blown affair) yielded Edward Flynn, then-Gov. Romney’s Public Safety Secretary.  Not long after Flynn was vying for a job in Milwaukee, which he got and still holds.  National searches for the School Superintent passed over qualified local candidates in favor of figures that seemingly used the job as a stepping stone for a bigger, better deal than Springfield.

Add to that the relative success and consensus concerning the Fire Department.  Aside from the “hero” appellations for police and firefighters, the two are very different entities.  The Police Department is usually under more scrutiny than the Fire Department, but Springfield’s Fire Department has managed to stay out of the limelight even compared to other fire departments like Boston’s.

Leadership in the Fire Department appears successful, despite draconian cuts over the last decade leaving Springfield with among the lowest firefighter to population ratios in New England.  Gary Cassanelli, the former Fire Department head was not very well-loved in city political circles, but he got the job done.  Some argue the former education credentials for the Fire Commission were an attempt to ensure Jerold Prendergast and not Joseph Conant, the eventual Commissioner, became the city’s top firefighter.  Ultimately, Prendergast was not an option and in Conant the city found someone both local and well-suited to continue the Fire Department’s success under grueling circumstances.  Disrupting that continuity may have been harmful to the city.

It cannot be said that the current state of the Police Department is as praiseworthy and the public may question whether the deputy chiefs elevated and serving under Fitchet have either the interest or the capacity to break from the Fitchet era.  On top of that, although diversity in leadership is no panacea, it also cannot be overlooked that all three potential commissioners are white men.  Nor is the experience with the School Department as instructive since local boy and current Superintendent Daniel Warwick got his gig after a national search and a School Committee vote well-short of unanimity.

Still, the problem may not be whether Springfield needs a national search so much as whether it needs a public search. The nature of the process Sarno laid out seems to omit the public.  One of the city’s three deputy chiefs may, in fact, be perfect for the city and its needs.  Such hiring processes often take place in part behind closed doors, yet Sarno’s plan appears to have neither public oversight nor an opportunity for the public to offer input.  Sarno may yet offer such an opportunity, but had apparently not done so as of Friday. Like in Boston, where Mayor Marty Walsh installed interim Police Commissioner Bill Evans as the permanent top cop, staying internal may be successful, but for the moment a lost opportunity.

Sarno’s decision to not only limit himself to Fitchet’s deputies and also unequivocally praise Fitchet’s tenure is odd itself.  Sarno does not have to own Fitchet’s tenure as much as a mayor in theory would because Sarno, in his first year as mayor was still playing second banana to the Control Board when Fitchet was picked.  He could distance himself from Fitchet’s mixed record if he wanted to and yet has chosen not to do so.

Also at stake are the chances for reviving the Police Commission and/or a debate on police leadership.  Ordinances to reestablish the body and its Fire Department counterpart were introduced last month and as stated many councilors very overtly made election year promises for revivals.  Assuming the city signs a contract with the new commissioner, the Council may need to approve it.  The ordinance says the Commissioner cannot be appointed for less than three years, the same minimum length of time usually needed to require Council authorization of a contract.

There are reasons why both rank and file cops and residents, particularly those worried about policing in minority neighborhoods, would want the civilian commission back.  It provides a check on the cops that is independent of the mayor’s office, if appointed through it. But it is also a forum for all parties to debate policy and maintain fairness both among cops and between the police and the public. 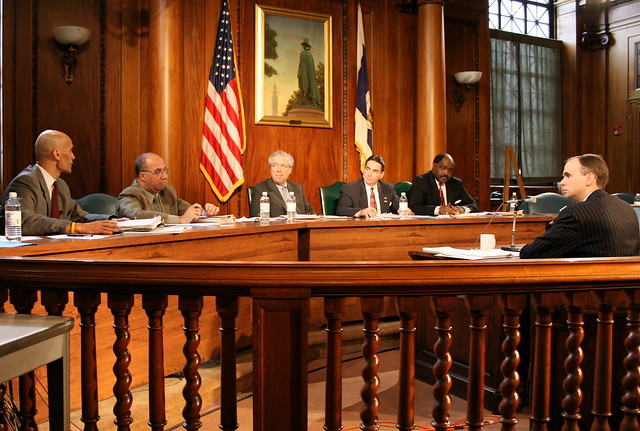 Springfield Finance Control Board in 2008 (via Urban Compass/Heather Brandon)

There are some reasons why it should not be reconstituted either, too.  Apparently the Control Board found it and the placement of the chief within Civil Service ineffectual and a hindrance to Police leadership (although it did little to hide its belief that it needed to broom Police Chief Paula Meara, too).  Another problem, perhaps on the FCB’s mind and certainly city pols’ minds is that the commission, because of its natural visibility, can be a soapbox or stepping stone for electorally ambitious individuals.

The Republican mentioned that City Solicitor Ed Pikula has questioned the legality of reestablishing the commission’s as well.  An attempt to reach Pikula late Friday afternoon was not successful, but if his concerns are about the interference with the city’s contractual obligations to the sitting Police and Fire Commissioners, then the proposed ordinances would need to be changed to consider that.  However, the power of the Council to reorganize the Police and Fire Department should not be in doubt.

A rough back of the envelope calculation suggests a Commission ordinance has the votes to pass the Council.  There is more doubt as to whether nine votes exist to override a near-certain Sarno veto.  However, if Sarno seeks to ensure that the Police Commissioner’s contract locks in the disciplinary powers and freezes out any revision of the Commissioner’s power or reestablishment of a commission, he will essentially be smothering a debate on the issue before it can rightfully begin.

In the end losing that opportunity to seriously revisit and debate the Police Department’s structure and leadership would be the greatest loss.  With nearly ten years passed since the leadership structure was shaken up, there is now a body of evidence that can be weighed and considered before moving on to the next ten years.

Sarno’s move to potentially preempt Commission ordinances may just be flipping the bird to the Council.  However, as much as that may or may not be true, it is also another example of the mayor’s rather unprecedented consolidation of power.  The withering of appointed commissions that do not meet or go without appointees has come under scrutiny.  Unlike his predecessor who brought Sarno himself to Boston to lobby Beacon Hill, the mayor has all but rejected coordinating with councilors when dealing with the legislature.

Perhaps the most shocking assertion of power came when the mayor vetoed last summer’s residency ordinance.  Sarno could have articulated a political or preferred policy reason for rejecting the ordinance, which is his right in the legislative process.  Rather he relied on a legal rationale from the Law Department, which included some claims over which reasonable people could disagree.  However, it also included a sweeping assertion of mayoral power that the city charter simply does not provide.

Namely, the Law Department argued the ordinance improperly infringed upon the mayor’s power to appoint department heads and city employees.  Consequently Sarno could claim incredible power.  The implications of such a reading of the city’s governing documents would call into question not only the residency ordinances, but every qualification for department heads (like Conant’s), the structure of department leadership and beyond.

Rejecting a commission fits into this pattern.  A commission would dilute Sarno’s power over the public safety branches by placing power outside of the mayor’s office and creating a buffer between the mayor and the departments themselves.

It bears repeating that Fitchet’s tenure has not been a total disaster and perhaps one of his three deputies could prove to be transformative figure the department could use.  Yet with crime such a huge issue in the mind of residents and certainly those who may bring investment to the city, the management of the department cannot be consigned to a smoke-filled room without any public input as to the leadership, structure and future of the department.  The matter is simply too important to be silenced by turf wars and ego.