UPDATED 11:23PM: To reflect confirmation of details via other news reports and to correctly state a women is running for Gale Candaras’ seat.  A previous version of this story said one was not.

SPRINGFIELD—State Representative Cheryl Coakley-Rivera of the 10th Hampden district, Springfield’s only Hispanic state legislator is poised to resign from the Massachusetts House to take a job as an assistant clerk magistrate according to several sources briefed on the matter.  She is set to announce her resignation Friday at her 50th birthday party.  The vacancy of her seat adds open seat to the growing list in the Pioneer Valley.

Coakley-Rivera’s resignation from the House will be only one of many as several lawmakers have fled the state legislature for other jobs or for less dignified reasons in an evacuation of Beacon Hill like none other since the British were coming.  More seats opened as dominos fell amid political promotion such US Rep Katherine Clark’s move to take Sen. Ed Markey’s old house seat.

Until last August, Western Mass had avoided what seemed like the largest evacuation of Beacon Hill since the British were coming.  Then Mike Knapik resigned, triggering a special that Don Humason won.  An election to fill his seat will be April 1st.

Coakley-Rivera was elected in 1998 after Anthony Scibelli died.  Scibelli’s death occurred days after winning the Democratic primary that year and Coakley-Rivera, then known simply as Cheryl Rivera, was the replacement nominee the party selected.  Her election as the state’s first Hispanic female legislator was an appropriate herald for the district transformation to a predominantly Latino one.  Tremendously Democratic, her replacement will almost certainly be whoever wins the primary.

The 10th Hampden, hugs Springfield’s border along the Connecticut River and defined by its inclusion of the North End, South End, Downtown and western end of Forest Park, including the Historic District.

Coakley-Rivera has been identified with the New North Citizens Council the neighborhood association/social service agency based near Memorial Square, which her late mother, Barbara Rivera, once ran.  Tight with Herbie Flores and holding critical cachet as one of the city’s few politicians that is Hispanic, a woman and gay, she has enjoyed a great deal of access in city political spheres.

She was in Charlie Ryan’s orbit when he was mayor, but later found her way into Domenic Sarno’s as well.  In 2011  Coakley-Rivera offered vocal support for Sarno’s reelection against challenger Jose Tosado, with him she has not always seen eye to eye.

On Beacon Hill, she was once the House Chair of the Labor and Workforce Development committee and pushed for paid family leave.  More recently she has had an assistant vice-chairmanship of the powerful Ways and Means Committee.  However, on other issues critical to the 10th Hampden, like CORI reform, Coakley-Rivera needed direct pressure from the community to lurch in direction consistent with her community.

Coakley-Rivera did advocate on women’s and LGBT issues as well.  It was amid efforts in 2004 to maintain marriage equality in Massachusetts that Coakley-Rivera formally come out as gay.  She had also taken vocal stances against cuts the Romney administration had pushed for LGBT programs.

Coakley-Rivera had been talked about as a successor to Domenic Sarno. (WMassP&I)

Coakley-Rivera had been widely speculated as a mayoral candidate after Sarno leaves office, although talk of that has dimmed of late.  Observers of Springfield-area politics say the timing to depart the legislature is not necessarily of her design.  Rather, it may be due to Clerk of Courts Laura Gentile’s staffing needs at Hampden County’s courthouse.  The jobs was publicly posted on the state HR website.

At this point in the calendar it is unclear whether or not a special election will be held to fill her seat.  A special election, if scheduled promptly, will likely not seat a rep until June at the earliest. The legislative session ends July 31.  Brian McNiff, a spokesman for the Secretary of the Commonwealth’s office, said the decision is entirely up to leadership in the body with the vacancy.  He noted that another factor is that fact that nomination papers are already circulating.

Vacancies for lengthy periods do happen.  Holyoke Rep Michael Kane, who remained on the ballot for reelection, resigned in the summer of 2012.  His seat was not filled until Aaron Vega took office in January 2013.  If no special election is held in the 10th Hampden, it will remain vacant until January 2015.

Whether the Speaker in consultation with the Secretary schedules a special, potential candidates are said to be making calls.  Carlos Gonzalez, a figure in the area Latino Chamber of Commerce, has been calling key people throughout the district.  Sources in the city’s fractured Latino community had described Gonzalez as likely to receive Coakley-Rivera’s endorsement.  She confirmed this to Masslive this evening marking a stunning reversal as the two have been regarded as political rivals for years. 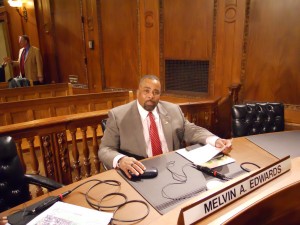 Another name in contention due to the serendipity of redistricting is Springfield Ward 3 City Council Melvin Edwards.  Edwards had contemplated running against Ben Swan in 2012, but was redistricted to Coakley-Rivera’s seat.  Notably, at the same time, former Ward 6 Councilor Amaad Rivera’s precinct was moved into Swan’s district.  Edwards, however, has a great deal of strength in Ward 3 as President of the Maple Heights/Six Corners neighborhood association and has ties to Hispanic groups and Forest Park activists.

Neither Edwards nor Gonzalez could be reached for comment.

Other names in consideration are Ward 1 Councilor Zaida Luna, Ernesto Cruz, who ran at-large for City Council last year and Anthony Wilson, an attorney with the Springfield Law Department.  Luna said in an interview she had been approached by people, but was undecided, “I just don’t know.”  Being a local councilor allows her do what she likes best in politics.  “I like to work directly with the community,” she said.

Wilson, who is still contemplating a run for state senate, told WMassP&I in an email that he only just heard about the vacancy and had not yet “given it any thought.”  Ernesto Cruz, who ran for City Council last year at-large ruled out a bid telling WMassP&I, “I have a full plate and no time for that.”

In a crowded field, the seat could easily go to a non-Latino. Redistricting also moved in the affluent and largely 6B Springfield precinct from Brian Ashe’s Longmeadow-anchored 2nd Hampden. Between the Forest Park precincts and the Classical Condos-Mattoon Street axis, all of which have above average turnout for the district, there is enough heft to counteract the rest of the vote or at a minimum provide the margin of victory.

Coakley-Rivera’s departure also underscores a lack of women in city elected office.  A woman is in contention to replace Gale Candaras in the Senate, but she may have difficulty beating the Democrats there and only one woman is a definite maybe so far in the 10th Hampden.  Other open or potentially open seats in the city are thus far bereft of women candidates.  Only two women serve on a City Council of 13 and 3 of six elected serve on the School Committee.  Women like Candaras of Wilbraham and Mary McNally of Springfield have declared for Hampden County posts, namely registrar of probate and district attorney respectively.