That’s the Power of Endorsements (for State Senate)…

UPDATED 1:19PM: For grammar and clarity. 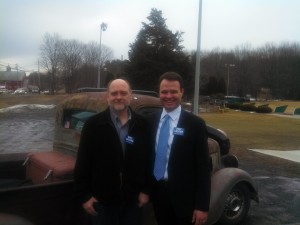 GRANBY—Caucus season has come and gone and with it a phase in down ballot races.  Campaigns now focus less exclusively on wooing activists and take on the more visible, familiar contours of a campaign like collecting endorsements from organizations and notable people.  In this Hampshire County town, that process took its first steps with a fresh endorsement in one of the region’s hottest races.

Many, if not most, of the candidates in the race to replace Senator Gale Candaras kicked off their campaign with a base of support from leaders in their own communities.  Endorsements fall into a few categories.  Some will do work on the ground.  Others can validate a candidate’s seriousness.  Some will raise money.  Others are a means to free media.  More and more prominent voices will chime in for campaigns even as the value of endorsements remains up for debate.

Selectman Mark Bail, a teacher and Democratic party activist. With Bail on board, the baggage wrangler turned top political aide gained a foothold in the senate district’s north, far away from his home in Longmeadow.

When Lesser was in high school, Bail was his debate coach.  He currently teaches in East Longmeadow, but the two reconnected after the senate campaign began.  Bail frequently posts on the popular Blue Mass Group website, a nexus for (often progressive) Massachusetts politics.

The 1st Hampden and Hampshire includes about a third of Chicopee and Springfield as well as Belchertown, East Longmeadow, Granby, Hampden, Longmeadow, Ludlow

Lesser is not the only candidate to benefit from endorsements so far.  Springfield City Councilor Tim Allen, Ludlow School Committee member Chip Harrington, Thomas Lachiusa, a counselor at the county jail, and Ludlow Selectman Aaron Saunders all have their backers as well. 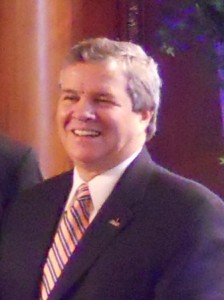 When Allen announced in mid-February, he was joined by the body’s current President Michael Fenton as well as fellow ward councilor Melvin Edwards.  Allen is expected to get other councilors’ support and is said to be corralling School Superintendent Dan Warwick, too.  Warwick, who has myriad political contacts could be a useful very supporter, but as an appointed employee and not an elected one, presumably he could not raise money for Allen.

Saunders, the Ludlow selectman, probably got the most coveted, but ultimately most anticlimactic endorsement.  His former boss, the outgoing Candaras, enthusiastically backed his campaign. Saunders served as Candaras’ chief of staff for several years both allowing him to eye the political levers closely, but clearly having an impact on the senator herself.  Those familiar with their relationship have said she thinks of Saunders “like a son.”

Harrington has yet to release a full list of endorsements, but his campaign said they are coming soon.  Being a fixture of Ludlow civic life for as many years, Harrington seems certain to get support from hometown notables.  One endorsement expected in his list is that of the correctional workers at the Hampden County jail where Harrington once worked.  Political heft among unions varies considerably, and this campaign could reveal the impact of correction employees’ nod.

However, Lesser, despite being a political newcomer, if hardly a neophyte, came out of the gate with high profile support in his hometown.  Brian Ashe, Longmeadow’s state rep, offered a glowing endorsement of the candidate.  Prominent Democrats in the town, including Candy Glazer, the local party chair and Michael Clark, the School Committee chair have offered critical support as well.

Glazer serves as Lesser’s campaign chair and Clark has been working on Lesser’s campaign putting to work his experiences on past local campaigns for governor’s council and Ashe’s reelection.  That early work has no doubt firmed up the politically purplish town to Lesser’s benefit, despite the presence of fellow Longmeadow resident Lachiusa who so far has secured nowhere near the support Lesser has.

With the new local endorsement in hand, Lesser with Bail at his side met patrons of all ages at Dunkin Donut recharging their caffeine reserves.  An intern was on hand with a Granby signature sheet, which appeared to be filling up.  One young woman said she did not live in Granby, but rather Chicopee.  Lesser deduced it was in a part covered by the 1st Hampden & Hampshire district. Earlier in the morning, Lesser spoke to the Granby Democratic Town Committee. 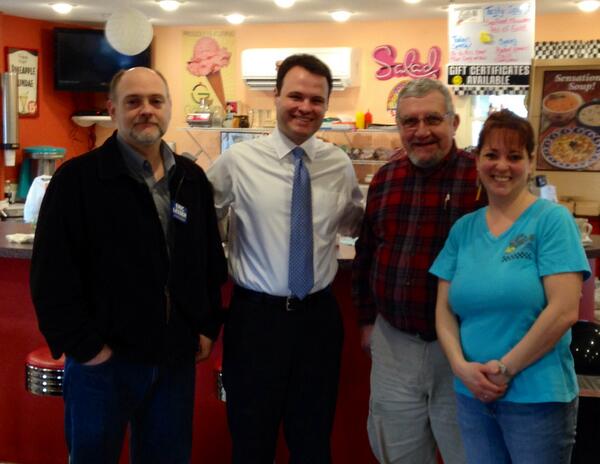 Up the road at Happy Days Family Fun Spot, a combination driving range and diner on Route 202, Bail introduced Lesser to the owner and staff.  As Lesser and company sat down for lunch, the owner Denis LaFleur related his transformation from a place where weeds were growing on the mini-golf course to its current, brightly colored setup.

A few patrons walked in, instantly recognizing Bail, who quickly referred them to Lesser who got another signature or two on his nomination papers in the process.

The endorsement game often plays out behind the scenes.  For example, at least three campaigns are sure to be lobbying to get Springfield Mayor Domenic Sarno’s support.  The mayor does not live in the district and his base cannot be plugged easily into a modern campaign.  Still, picking up his support would be a public relations coup, boosting the endorsed’s name recognition with a bit of free media.

Aaron Saunders’s former boss could lobby for other endorsements. (via Facebook/Saunders campaign)

Sarno is not guaranteed to endorse a candidate from the city or any at all.  There are advantages for him in backing any of the candidates (or none), including Allen with whom he has not always seen eye to eye.  But the case of Sarno is a perfect illustration of the jockeying for an endorsement and the factors (or perils) a sought-after notable may face in making their decision.

Back in Granby, Bail said in a Facebook post with a photo of a teenaged Lesser, another student of his and himself, that he did not want to just introduce Lesser to Democratic Granby at the party meeting.  Instead, he was “proud” to introduce Eric to “the real Granby, people I like, people who [are] responsible for making Granby the town I’m proud to live in,” as at Dunking Donuts and the driving range.

In a brief interview outside Happy Day driving range, Bail offered a bit more on why he was backing his former student. “We’re at the point in time in our country and in our state when we need to focus on getting people of Eric’s generation involved. Eric is, I think, one of the best of his generation,” Bail said.

Any candidate, indeed anybody, would like such things said about them, but what Bail did is what all of the candidates will need in the next few months: introductions and validation. Whatever their true power, the more numerous and more diverse endorsements candidates receives will only be a good thing.