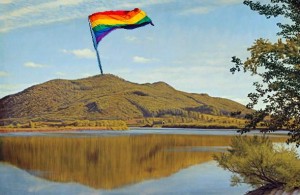 AGAWAM—Almost every candidate will feature or get questions about their family. It is standard politics. Shawn Allyn, one of the Democrats running for Hampden County district attorney, often has his law partner, Lisa Ball, at his side. She appears in promotional photos, joins him at political events and is credited with snapping behind the scenes pictures on Allyn’s Facebook page.

But Ball is not family, anymore. Not legally anyway. Allyn sees her as such, though. After all, she was something of his rock, when, as their marriage ended, Allyn came out as gay. “My best support was Lisa Ball. I could have never done this without her,” Allyn said.

At an April 10 forum for the Hampden County District Attorney election in Holyoke, Allyn noted his sexuality when asked about his greatest challenge. President Barack Obama nominated incumbent Mark Mastroianni to be a federal judge, opening the position. Allyn, Hal Etkin, Anthony Gulluni and Brett Vottero are seeking the Democratic nomination for DA.

“It was like a public outing,” Allyn said remembering how he felt speaking at the forum.

Allyn’s statement occurs at an inflection point of sorts for LGBT politics. Some Bay State LGBT fixtures like Carl Sciortino and Barney Frank have left office. A large, new wave of LGBT candidates are running and pursuing a broader range of offices like Maura Healey in the Massachusetts attorney general race.

Steven Thai, press secretary for the Victory Fund & Institute, a nonpartisan group that helps elect LGBT candidates for all offices nationwide, said, “The next frontier of individuals are those defending the laws advancing our community or opposing those that hurt us.” Victory has not weighed in on the Hampden DA race yet.

In Hampden County, Allyn’s announcement may be a marker of its own. Many municipalities may have never (knowingly) seen an LGBT candidate grace their ballots. Massachusetts has been on the forefront of LGBT equality, is that universal?  With lower turnout skewing the electorate older, whiter and perhaps less LGBT-friendly, has enough progress been made in the Springfield region’s politics?

The cities might have. Holyoke elected Mayor Alex Morse and Councilor Jossie Valentin. Springfield had former Rep. Cheryl Cokaley-Rivera and former Councilor Amaad Rivera. Both cities’ gay communities have grown. Rivera, now an aide to Senator Ed Markey, has organized Springfield Gay Pride events, but despite best efforts, they are small for the region’s size.

Allyn, a native of Holyoke, insists his decision to come out to the electorate—he was not closeted among family, friends and colleagues in the bar—was not about being the “gay candidate.” His platform has no particular lesbian, gay, bisexual or transgender focus. Going public reflected a desire to be open about his identity and diffuse any “undercurrent” to use his sexual orientation against him.

“I felt like that there was a viewpoint that it was a weakness and they were targeting me on that issue,” Allyn said during an interview at a restaurant here not far from where he lives in Feeding Hills. “I felt it was getting nasty.” His identity was never something he flaunted, nor wished to. “Do straight people go around saying, ‘I’m straight!’? Of course not!” he said.

Allyn, 42, a Sunday regular at the eatery where he was interviewed, was in jeans, a button down shirt and a baseball cap concealing the onset of gray and thinning hair. In this guise, he could be easily typecast as a “bro,” checking almost none of the boxes for gay stereotypes.

Seeing the nasty and at times personal tone of the 2010 DA’s race, Allyn did not want his identity revealed in an embarrassing way. “People start making an inquiry on who you’ve slept with where you’ve gone out,” Allyn said noting the area gay community’s small size. Observers of the race say this “inquiry” has, in fact, happened, but Allyn declined to comment on the veracity of such claims.

Dori Dean, an LGBT Democratic State Committeewoman who has run campaigns across the county, including Alex Morse’s first, said the landscape has changed, “I don’t think that there is anything salacious about coming out,” she said. Using it against a candidate like Allyn would be risky for his opponents. “It cuts both ways,” Dean, who is neutral in the DA’s race, explained.

Indeed, Etkin stepped in it big time when he called LGBT individuals “non-traditionalists.” Etkin realized his error and tried to undo the damage with references to LGBT friends and family, to no avail. Condemnation flew across Facebook and Etkin lost some support in his backyard. Etkin’s mistake aside, Allyn is on guard from real political attacks. Yet, this is still a Bay State Democratic primary. Such attacks would need to be surgical and covert.

Reaction from political circles ranged from shrugs to head scratching about the choice of venue. Some wondered if he was trying to stand out or distract attention from an adverse court ruling. Allyn said neither were true, but the campaign has seen a small surge in support and fundraising since April 10. The media response was limited, but sensitive and fair, as in Stephanie Barry’s interview of Allyn and Ball.

Allyn and Ball were married in 2000 and early on were happy. They built a law practice together, often gaining headlines for high-profile employment or civil rights litigation.

But even as their professional relationship seemed assured, their marriage had hit the rocks. While in counseling Allyn realized he was gay, “As the marriage progressed, I became less happy with myself.” “It was nothing Lisa Ball did,” he said. Their marriage ended amicably and they clearly remain close friends.

Distinct from the electorate, Allyn said he has sensed among political classes an “old-school mentality, that it [being gay] is seen as a negative.” It was the question posed to him that prompted him to go public that night, “I just want to get this out of the way and have the voters see me for who I am.”

That would appear to sync with observations of countywide politics. Dean said indifference, not malice, probably typifies voters’ attitude toward LGBT candidates. In some places, a candidate’s sexuality could be made an issue, but “That sort of maneuvering happens in the backchannels,” Dean explained.

However Allyn’s campaign, which falls on the same election calendar as attorney general, may not get as much attention since that race has an LGBT candidate, too. Healey’s campaign, which if successful would make her the nation’s first LGBT AG, has already attracted a great deal of attention.

Other factors are limiting how being gay can help a candidate. Dean said given the incredible progress for LGBT Americans under President Obama LGBT political financing has shifted. “The money is not being consolidated like it used to,” behind a few candidates in a few states. Dean said the local LGBT community is smaller than elsewhere and so is its firepower. Coming out “doesn’t make you superman,” she said.

“All they think is they have to come out as LGBT and all of a sudden the money starts flowing,” Thai said. Competition for resources has become fierce. According to Thai over 200 candidates are vying for Victory’s support with more to come (like Allyn). “Victory takes its endorsement process incredibly seriously. That means there are going to be individuals we do not endorse,” Thai explained. He said Victory offers “the support necessary to help candidates be successful.”

Viability is a huge consideration in Victory’s deliberations like whether a race is the right one for an LGBT candidate and whether there is a path to victory. Victory usually requires candidates to be pro-choice because the right to privacy ensconced in Roe v. Wade implicates LGBT rights.  Judicial and DA candidates are an exception because they cannot perform their duties with such commitments.

Thai emphasized the importance of electing LGBT people in both parties.  Progress made is better preserved, he argues, if LGBT members are in parties’ caucus rooms or present when legislation is passed.

Allyn has no explicit LGBT agenda, but he does see room for improvement that could help that community. “The unique role of the district attorney, you have to apply to law equally and fairly,” Allyn said. “In speaking to the LGBT community they feel their needs are not being met,” he continued.

He said bullying and transgender discrimination are problems the local LGBT community has highlighted. Trainings to combat this are often not conducted by LGBT individuals, perhaps limiting effectiveness. Diversifying the trainers and attorneys within the office would be priorities. In Holyoke, he told the forum his office would be the most diverse in the commonwealth, including the LGBT community.

“Am I going to have a favoritism toward LGBT? No,” Allyn said, but “civil rights violations will be taken seriously. I think that will be helpful to their community.”

Allyn says he has experienced discrimination since realizing his orientation which was around the time his marriage formally ended in 2008. It was nothing of a criminal nature or a civil rights violation, but it still hurt.  “I have been treated differently by colleagues. I have been treated differently in a locker room.  You can feel that,” he said without going into more detail.

When it seemed Mastroianni might be moving on, Allyn began considering the race. Something he, Ball and other confidants considered was his orientation. Allyn suggests it just turned out the forum offered the opportunity to say what he had already decided needed to be said. “I think people have a right to know who you are,” he added.

Dean said we could be reaching a point where a candidate’s orientation has withered away as an issue, “I think it could be one of those things we’re I’m a left handed golfer and I’m gay.”

At the same time, Thai says he cannot see a time when groups like Victory will not be needed, any more than EMILY’s List becoming obsolete. “There’s never been a passage of marriage equality without an LGBT person at the table,” he said noting why it is essential LGBT electeds are there as issues arise. Although not the first LGBT elected official ever, Harvey Milk is widely credited as one of the founding fathers of modern LGBT political activism (via wikipedia)

During the 1970’s, the slain San Francisco City Supervisor Harvey Milk urged his LGBT brethren to come out of the closet. Among the reasons was to make others realize that people who are gay are in fact like everybody else. It would be easier to accept gays and lesbians if people discovered they already knew them. That may have benefited LGBT electoral prospects too.

No doubt that happened in Hampden County too, laying the groundwork for what progress has been made for the LGBT community and its candidates. But challenges do remain. Minds need to be changed or, if not, consigned to the wrong side of history. Allyn says he lost some Facebook likes after he went public (although he has since exceeded 1000 likes). He got some emails renouncing their support.

The bad may be a fraction of the response. In addition to media requests, Allyn said he received support and words of encouragement. “Mostly I have had people contact me, email me” with “‘we have been waiting for you to do this,’” he said.