For No Campaign Financing Is an Island…

Three months after Senator Gale Candaras said she would retire from the 1st Hampden & Hampshire Senate seat, the Democratic primary has descended into a slugfest. The target: Eric Lesser, the former White House aide from Longmeadow. Lesser has attracted considerable media attention (including from this blog) and a string of endorsements, an incredible coup for first-time candidate.

This month things turned nasty as Lesser sustained a barrage of veiled (and not-so-veiled) attacks. On April 14, Springfield Ward 7 Councilor Timothy Allen, proposed a “candidates’ pledge,” the same day Lesser got prime real estate in The New York Times. That pledge caps out of state contributions at $5,000. Of other Democrats running, School Committee member James “Chip” Harrington and Selectman Aaron Saunders, both of Ludlow have signed on. Thomas Lachiusa, a Longmeadow social worker, may do the same soon.

In a prepared release, Allen said Wednesday he would file an objection to Lesser’s eligibility for the ballot based on Lesser’s time in Washington. The Massachusetts Constitution requires senatorial candidates to inhabit the commonwealth for five years prior to election. That period would include when Lesser worked for David Axelrod in the West Wing.  Lesser’s 2011 return to the state to attend Harvard Law is not in dispute. Courts have found residency eligibility is not a rigid construction and absences might not interrupt eligibility.

The 1st Hampden & Hampshire consists of about a third of Chicopee and Springfield as well as Belchertown, East Longmeadow, Granby, Hampden, Longmeadow, Ludlow and Wilbraham.

Allen has argued the pledge and the eligibility challenge are not personal. In his release, he cited the US Supreme Court’s McCutcheon decision and the Scott Brown and Elizabeth Warren’s “People’s Pledge” as inspiration. Some media suggested the target was Lesser, who, given his time in DC and at Harvard, could solicit out-of-state cash. As of posting time, Allen had not returned a request for comment.

Other candidates like Saunders, told WMassP&I, in agreeing to the pledge, “I am limiting my out of state contributions because it is the right thing to do, and it is the responsible thing to do.”

Lesser has all but declined to sign the candidates’ pledge, but would consider other pledges. In a statement to WMassP&I last week, Lesser echoed comments he gave other media outlets saying Western Mass’s future “depends on increasing connections to other parts of the country.” “We can’t build walls around ourselves,” he added and said his campaign has been a grassroots effort like his earliest political experiences, an allusion to the Proposition  2 ½ campaign he led in high school.

Lesser backers have been blunter, calling the candidates’ pledge a “gimmick” and at least one other candidate agrees. In a statement, Debra Boronski, the race’s only Republican, said the pledge was “grandstanding” and, following similar complaints from Lesser supporters, is distracting from issues. However, Boronski’s statement also took the opportunity to jab unions’ largely pro-Democrat political work, including phone-banking and get out the vote initiatives.

Allen’s follow up on the pledge with a challenge to Lesser’s candidacy undermines his claim to The Valley Advocate that the pledge is not about anyone in particular. Nor does the pledge address rising concerns about undisclosed cash in elections. Under state law, all candidate’s campaign contributions are capped at $500, regardless of geographical origin, and are disclosed as required by statute.

Zooming out, it becomes difficult to see this as anything but part of a strategy to alienate Lesser from the district’s electorate with an appeal to Greater Springfield’s insular instincts. Voters in the Valley have often prioritized a hometown connection over policy. This is not a wholly unique tactic, but not one that portends well for the Valley if that is a decisive factor in elections. Still, saying politicians have “gone Boston” is as common as national races’ tendency to tag those who have “gone Washington.”

In micro, that appeal to insularity goes on full display during Old vs. New Holyoke flare-ups. Of late, Old Holyoke has utterly failed to capitalize on claims that New Holyoke, however as Paper City-bred as the Old, are actually outsiders. Usually accusations boil down to too little time spent in town, like while in college, or receipt of money from outsiders like Northampton donors. 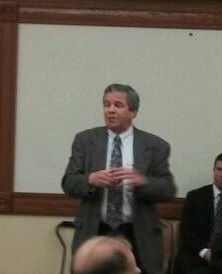 While seemingly a part of alienating Lesser from the district, turfing Lesser from the ballot is a serious and dangerous tactic, one that both Allen and Lesser should take seriously. Lesser supporters think he studied the residency matter beforehand and, while not cavalier, deem the claim frivolous. “This is about trying to bully someone off of a ballot and I’m not going to be bullied,” Lesser told WWLP. Allen supporters are not Pollyannaish about the claim’s success but play down the risks.

Whether Allen realizes it or not, kicking Lesser off the ballot could backfire. Allen filed this objection in his own name and trumpeted it. Harrington, Lachiusa and Saunders, none of whom has said much about it, could appeal to Lesser’s people if the challenge is successful. In effect, Allen may have strapped a bomb to his chest and grabbed a hold of Lesser. If it goes off, Lesser supporters will not flock to Allen. Idle dismissal of Lesser’s supporters in a non-Lesser world is a foolhardy gamble.

The candidates’ pledge, while less potentially explosive, again appears more about Lesser than the US Supreme Court’s insistence that shoving more money into politics is a good and pure exercise. However, Allen’s pledge does not mirror either the Brown-Warren pledge or McCutcheon. Nor does it address gaping holes in Massachusetts’ existing campaign finance laws, under which this race is governed, and not the 2012 US Senate race.

The 2010 Citizens United ruling birthed “SuperPACs,” which can often spend unlimited and undisclosed special interest money to bolster the candidates its masters like and slam the ones its master does not. Citizens United led to McCutcheon, but that decision only struck the overall cap a donor can give across all campaigns. Neither decision affected out of state contributions, which had long been legal.

Other than sharing a basis in criticism of the state of American campaign finance, the Brown-Warren pact is not like what Allen proposed. Under the “People’s Pledge” Brown and Warren agreed to pay a penalty to a charity if either benefited from an outside group’s sponsorship of online or broadcast ads. It applied to SuperPACs, unions, state parties and groups otherwise subject to strict disclosure rules. Both Brown and Warren raised princely sums inside and outside of Massachusetts. The pledge did nothing to regulate their own fundraising, capped at $5000 per donor and subject to regular disclosure.

Pam Wilmot, Executive Director of Common Cause MA, in an email to WMassP&I did not address the specifics of the candidates’ pledge, but voiced a clear preference for pledges that limit outside groups. “We support the People’s Pledge to limit or eliminate outside unlimited money in elections, especially when adopted by all or most of the candidates running in a race,” she said.

Wilmot did, however, address Allen’s proposal generally, “Pledges of all sorts can limit money in politics but they also can have disparate impacts on candidates based on their backgrounds. It’s important to analyze why and how a pledge is being proposed.” She added, “The most successful are privately negotiated rather than unilaterally announced by press release.”

Saunders, in his email, seemingly alluded to this when he urged the campaigns to meet and discuss how the candidates’ pledge would be enforced. Still, Saunders said he would abide by the pledge regardless.

The timing of the residency objection aside, it is hard to see what else may have inspired Allen’s pledge. Data from the Office of Campaign & Political Finance on recent competitive Springfield-area senate races suggests non-Bay State contributions rarely exceeded 20% of the overall take. Lesser could exceed that number. He may not either if he rakes in substantial in-state money too. Would Lesser’s out-of-state money be any more corrupting than the minority of Candaras’ take for her 2006 campaign was?

Allen alludes to a corrupting influence from out of state money, but it pales in comparison to existing problems in Massachusetts campaign finance law. This was laid bare during the Boston mayoral race last year, where flimsy disclosure laws and deep pocketed interests unleashed a torrent of money, which on balance, helped Marty Walsh, the victor. 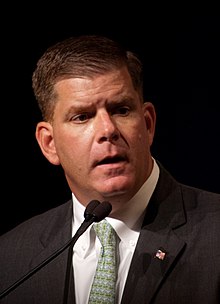 Boston Mayor Martin Walsh won election amid a flood of outside, difficult to trace spending into the race. (via wikipedia)

Walsh, a skilled campaigner and savvy pol surrounded by some of the state’s brightest operatives, may very well have won without the outside money. Still, titanic multi-million dollar sums were spent for his benefit, matched by about $1 million backing Walsh’s opponent John Connolly. The Boston Globe later found one pro-Walsh group routed money through a New Jersey entity, complicating disclosure efforts. Despite criticism, an effort to establish a People’s Pledge last year in Boston failed, and the issue has flared up in this year’s Democratic gubernatorial primary.

“Outside often secret money in elections is a huge problem and short of a constitutional amendment, only a People’s Pledge, public financing, and increased disclosure can address it,” Wilmot said. “A bill to require more disclosure of outside spending is currently pending in the legislature,” she added.

Given a lack of focus on these glaring loopholes, it is hard to see how focusing on disclosed, if out-of-state, money is a real problem. Ironically, exclusively local contributions could serve to only empower local and in-state special interests further.

With rare exception, a tiny class of interests in the Lower Valley contribute to political campaigns, usually those of incumbents or close friends to the already or once elected. Reformers in Hampden County lacking such ties often must go to Northampton or Amherst’s political classes for cash.

The revision of Springfield’s zoning law exposed the power of special interests who prospered under the antiquated ordinance. Such interests, all regular campaign donors, deterred reforms for years, until community pressure grew unbearable for the pols. These are the local contributions that supposedly give voters more confidence than would those potentially from former denizens of Harvard Yard and the District.

How to get here from there…? (WMassP&I)

Altogether, it makes the pledge seem less about out-of-state influence and more about the difficulty of fundraising in Greater Springfield. Add to that the nature of Massachusetts campaign finance law. With the state’s $500 limit running with the calendar year, there can be some unintended consequences as the special House races this year showed.

Prominent Democrats are keeping displeasure about the bickering to a minimum, or at least to themselves for now. Boronski could capitalize on the pledge if Dems take it.

Lesser is not invincible in the primary and a few weeks ago, even with the good press, the facts on the ground suggested a horse race. Some Valley politicos did sincerely question his fluency on local matters, something Lesser’s opponents may yet argue. That is different from intimating he is not Pioneer Valley enough to be a state senator. Aside from such tactics, these bombs lobbed at Lesser carry another risk. It may be a too-early admission, at least among bomb-throwers, that Lesser is winning.