The 10th Hampden Things about Cheryl Coakley-Rivera: A Reflection…

SPRINGFIELD—Cheryl Coakley-Rivera may have resigned from the legislature, but she does not want people to think she has stepped away from politics. The same outlook that led her to a 15 year career representing the 10th Hampden House district, borne out of her formative years, could lure her back to politics.

“I used to go with my mom and dad and watch them mediate and negotiate between the Hispanic community and the police officers,” she said recalling one of many memories.

Coakley-Rivera left the legislature late in March to take a position with the Hampden Superior Court Clerk’s office. The availability of the job drove the timing of her resignation, but it also provides her closer proximity to the action in Springfield. Coakley-Rivera has been on a short list of individuals who might pursue Springfield’s mayoralty, but for now she will be at the city’s main courthouse.

Coakley-Rivera’s career has not been universally praised, though. Schisms exist within the district she served and some community groups very overtly leveraged public pressure to bring their issues to her attention. Political opponents of the New North Citizens Council, with which Coakley-Rivera is identified (her mother once ran it), have tarred her with the same objection leveled against the group. Requests from Speaker Rober DeLeo’s offic to get an impression from Beacon Hill went unanswered. 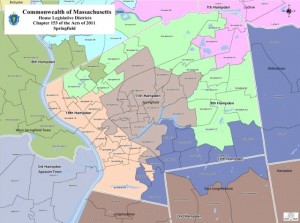 Whatever imperfections in Coakley-Rivera’s representation, they are best left for what, if any, next step she makes electorally. She nevertheless broke ground both in the legislature and in Springfield politics, but also was prominent in the media and public discourse in the city and on Beacon Hill.

Coakley-Rivera was the first female Hispanic legislator in Massachusetts. She won election after the longtime holder of the Springfield-based district (which hugs the city’s western edge) Anthony Scibelli died shortly after winning re-nomination in 1998.

Coakley-Rivera, an alumna of Sacred Heart and Cathedral (a rarity for people from her neighborhood, graduated from law school and worked in the District Attorney’s office. Her first taste of public service was on the Park Commission. But she was “very behind the scenes,” when it came to politics.

But after Scibelli died, Coakley-Rivera had a prime opportunity to get in the game. “I called a couple of people up,” who “thought it was a good idea,” she recalled. To fill the vacant nomination she and Carlos Gonzalez, the other contender, needed to get the support of the affect Democratic ward committees. 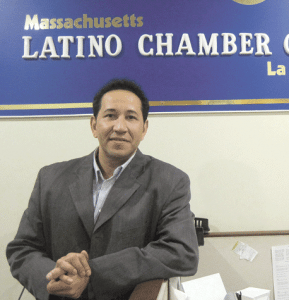 “It was contentious in that I was running against the Mayor’s aide,” Coakley-Rivera elaborated alluding to Gonzalez work for Michael Albano. “He was the chosen one,” but with her bright, wide smile she continued, “God works in mysterious ways.” Indeed He does. Gonzalez is now vying for Coakley-Rivera’s seat and has her support. Ward 3 Councilor Melvin Edwards and Ivette Hernandez are also running.

Sitting in the Columbus Avenue Starbucks, Coakley-Rivera, wearing a tam and a fluffy cream colored sweater, recalled her early years in the legislature. Balancing the needs of diverse district and the competing interests of suburban and urban legislators was a big part of the job.

“I was really green when I got in,” she said, but then Rep. Dennis Murphy, the Energy Chair and Rep. Billy Nagle, then Majority Leader, helped her out. Nagle took care of Western Mass reps in the budget. “I was able to secure quite a bit in terms of the budget, more so than other freshman would get.” 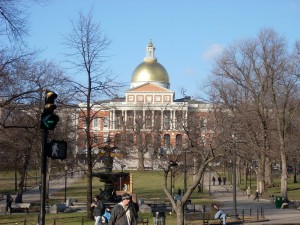 Some matters played along the legislature’s fault lines, which could be frustrating, Coakley-Rivera said. She understood why suburban colleagues might oppose issues important to urban legislators like her. As an example, she cited the bottle bill, which would, if passed, expand the beverage eligible for a deposit.

Coakley-Rivera pointed to successes funding for the police department’s C3 program, access to carbon monoxide detectors and animal cruelty, a pet cause of hers (pun intended, she’s taken in rescue dogs).

There were some times, by her own admission, when she got a bit too involved in the city’s internal dynamics. “It was a struggle at times to throttle back on some city issues. The trash fee was a perfect example,” Coakley-Rivera said referring to her effort to repeal the fee via the State House. She succeeded, but the city found a legal workaround.

Despite being the first Latina legislator, Coakley-Rivera said she had received criticism for being only half-Hispanic (her mother, Barbara Rivera nee Coakley, was Irish). Others faulted her limited fluency in Spanish. “I attribute that to a bunch of haters,” she said.

Coakely-River made history when she came out as gay, and became one of the champions of marriage equality during the debate ten years ago. In Springfield, she said LGBT community is accepted, but things could be better. “I think that the residents are mostly very progressive and open minded,” but, she added that police and City Hall could take hate crimes against LGBT people more seriously.

Coakley-Rivera served under four governors, each of whom she had a different opinion. “Deval Patrick came out of nowhere and has done a decent job,” she said. In particular she attributed the state’s fairly strong weathering of the Great Recession to the current governor, “We were okay, we stood our own.” There were many reasons why, but “many of them had to do with Patrick,” she stated.

“I really liked Cellucci, very nice man she said,” referring to Gov. Paul Cellucci, who died last year of ALS. She also expressed admiration for Jane Swift, who she said got a bad rap because she was a woman.

As for Mitt Romney, Coakley-Rivera described him as an absentee governor. “Romney just wasn’t really here,” she said perhaps an allusion to Romney’s travels to run for president. But Romney was in the middle of the fiscal crisis that gripped Springfield in 2004 and Coakley-Rivera had a front row seat.

“He wanted all control, he wanted to bust the unions,” she remembered, “We wanted to make sure that didn’t happen.” Coakley-Rivera said she did not feel the Springfield Finance Control Board was needed and that the board bulldozed its way through its tenure. Romney would not get on board without it.

Coakely-Rivera says leaving office is a bittersweet moment, but she feels she “left at a time when I accomplished some things.  But mostly I am opening the door for somebody else to experience” the job.

Early in her legislative career, Coakley-Rivera was advised to keeper her focus back home. Still the action under the Golden Dome and building a rapport with colleagues is crucial. “The more relations you build, the easier it is for them to understand Western Mass and its needs,” she said.

The individuals that come to a rep’s office with needs, constituent services by another name, are where she advises her successor to focus. “At the end of the day, policy is important, there are a lot of lives you can touch by picking up a phone,” she said.