UPDATED: A Budget You Needn’t Take with Prozac…?

EDITOR’S NOTE: This post is a version of the May 19 story published immediately after the budget press conference, updated with subsequent reporting. The original post has been archived and is accessible here.

SPRINGFIELD—Less gloomy than usual, the annual release of the municipal budget by Mayor Domenic Sarno seemingly promised some relief after years of cuts, layoffs, squeezing and, at times budget gimmicks.

Sarno underscored that the his Fiscal Year 2015 budget only relied on $2.8 million in transfers from stabilization reserves, which was looked on approvingly by City Council President Michael Fenton, one of the legislative branch’s most voracious fiscal hawks.

Sarno’s press conference, held Monday in the School Committee meeting room, the one-time aldermanic chamber when the Council had an upper house, focused on the good news, including academy classes for the police and fire. The presentation to the Council later that night filled in details, adding some sober facts to what was still a better picture than what many in the city have come to expect.

Flanked by Fenton, Budget Director Jennifer Winkler and Chief Administrative and Financial Officer T.J. Plante, Sarno delivered perhaps the most upbeat budget of his time as mayor, leaving even skeptics at a loss to complain. However, it is also probably the last budget Sarno will deliver before what, if any, field develops to challenge him in next year’s mayoral election.

The plan calls for $581 million in spending. A release accompanying the presentation said the city will spend $337 million within the schools budget, typifying the schools’ overwhelming share. The School Committee controls that money. School-related expenses on the city side of the budget include nearly $24 million on busing and another $1 million on adult education and leases.

In perhaps a sign that this budget was a different, questions from the press were limited and the conference was short. The highlights Sarno mentioned, police, fire, libraries and, notably, terrace mowing, also reflected the highest-profile controversies in recent budgets since the fiscal crisis erupted and nearly tore the city’s finances asunder once more.

Hiring is expected. The city will hold an academy class for 26 patrolmen with the option of 13 more. Critically, the fire department, whose ranks have been decimated after ten years of fiscal crises, will bring on 20 new firefighters. The net increases in those departments are less than the number of hires, however.

More details emerged at the presentation to the Council. Police hiring will yield a net gain of 7 officers and another seven staff positions for the department. Winkler told WMassP&I that the Police should have about 460 FTE (full-time employee) sworn officer positions in FY15. The Fire Department should rise 260 FTE firefighters, a net increase of 10 positions. Although still low for a city of Springfield’s size, this restores fire ranks to the level it had when the 2009 stimulus put off further reductions the recession precipitated. Those reductions ultimately happened after stimulus funding ran out.

Some new hires, such as within Capital Assets, will bring project management in-house and limit what the city spends outsourcing management of projects. Library hours should remain at 30 hours/branch. Public Works and Parks & Rec programs are funded as per usual. No trash fee increase is proposed this year and a string of employee contracts suggest more labor peace may be coming to city.

Appointed to his current position last year, FY2015 will be the first budget Timothy (T.J.) Plante oversaw from beginning to end as CAFO (WMassP&I)

The improvement in the budget picture appears driven by holding the line on spending (FY15 represents a 1.8% increase over FY14) and better revenues. Although the mayor did not detail the impact of limiting departmental budget growth, he did say that revenues are also up. Last year as the Council set tax rates, Board of Assessor Chair Richard Allen said property values in the city had begun to reverse their slide, allowing increased property taxes revenue.

The mayor said the budget-writing process began with a $21 million deficit, and, if the figures provided prove true, was reduced to only $2.8 million, which reserves will plug. Speaking to reporters after the presentation, Fenton said minimal use of reserves was “excellent news.” No layoffs are included in the budget and the accompanying releases suggested that staffing would remain level overall, rather than rely heavily on attrition of the city workforce to reduce costs.

Although use of reserves was low, budget writers did rely on several one-time sources to get into the black. City ordinance requires the city to spend a certain percentage of its budget on capital expenses financed through a pay0as-you-go scheme (pay-go) and this year that share is partly funded by unespent pay-go funds from previous projects and a $1 million settlement with Western Massachusetts Electric Company. Although in this case required by ordinance, use of one-time revenue to pay for capital expenses is not generally deemed as bad a practice as using it for regular recurring expenses. 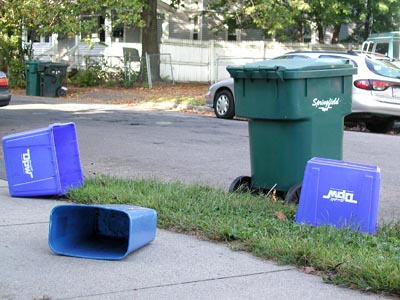 A surplus in trash fee revenue from two fiscal years ago (FY13) is being applied to FY15, which begins July 1 (via urbancompass,net)

Other pots of one-time funding/savings are in the budget as well. The enterprise fund that partially finances trash collection yielded a $200,000 surplus in FY13, and is applied to this year’s budget.

Technically one-time funding sources also include an increase in revenue due a projected spike in building permits and auction revenue. These are only technically one-time as they occur every year, but fluctuate greatly. Based on the historical accuracy of these predictions, budget officials expressed confidence these assumptions would meet the estimates in the budget.

Consequently, budget officials told WMassP&I, based on current conditions, the city is projecting a $19 million deficit next fiscal year.

Elusive for years, improved recurring revenues are part of the equation. The city benefited from an increase in local aide from Beacon Hill. Almost $1 million more was added to Springfield’s share of unrestricted assistance.

In an email, Allen, Chair of the Board of Assessors, said the projected value of all taxable property in the city would exceed $7 billion dollars for FY15 after wallowing below that for years. The fiscal year that ended June 30, 2013 reflected a recent low of less than $6.7 billion in taxable property as cheap foreclosure sales finally caught up to the city’s assessments. The decline in property values deprived the city of its annual 2.5% increase (the levy limit) allowed under Proposition 2 ½ as well as any “new growth” in property values that can be added to the tax rolls independent of the levy limit.

According to budget documents, the city lost more than $33 million over 4 fiscal years as property values fell. Instead, this fiscal year, the city is projected to take in more than $4 million in property taxes than it did last fiscal year.

Plante and Winkler told the Council that the city retired some debt service for decades-old school and water/sewer projects (the latter of which the city no longer borrows for directly) this year reducing FY15 debt payments by $2.5 million. The city’s stronger financial position also enables it to borrow at a lower rate than in the past, and therefore debt repayment for future borrowing will be less expensive.

City budget officials said the paradox where increases in state education aide, which in turn prompt a mandatory increase in the city side contribution to schools, was lower than in past years. Graphs included in the Council presentation showed that 62% of the entire budget, schools included, came from state aide. However, the schools take up 63% of the budget. The remaining 37% is all other services including police, fire, parks, libraries, trash pickup and more.

Revenue from the construction of MGM Springfield is not included in FY15’s budget. (via mgmspringfield.com

Notably, the mayor and budget officials were less sanguine than usual about the windfall expected if MGM Springfield is indeed built. Overseeing his first annual budget from beginning to end as CAFO, Plante said no casino revenues are included in the budget as MGM has not technically gotten its license yet. Both he and Sarno said repeal of the casino law could affect the city’s long-term budgeting.

At the budget presentation, Plante told councilors that regardless of the casino law’s fate—whether it makes the ballot or not and whether it passes or not—FY15 will be unaffected. He said, however, “It gets a little harrier,” for FY16 and beyond if the city does not get that revenue a casino would supply.

The news was remarkably good, maybe too good. Moreover, it should not mask the fact that Springfield continues to have incredible fiscal challenges. The city’s retirement system remains frightfully underfunded as both budget officials and councilors noted. A long term program of re-growing the city’s workforce, particularly its fire department remains needed. Additionally, there are billions in capital needs.

Fenton said the Council would seek to complete it budget review with three Committee of the Whole meetings. At each, a different area of the budget would be reviewed. A separate meeting at which the council would vote on the budget will be arranged pending resolution of conflicts among councilors’ schedules.

Traditionally, the Council’s budget approval hearing has occurred in the third or often the fourth week of June, days before the old fiscal year ends and the city would officially run out its authority to spend. The Council cannot add to or transfer funding during its review, but it can reduce the dollar values on any budget line not required under state law.

@MSzafranski413 missed the op. Budget sounds rosy. Getting my magnifying glass out now.

The Council’s review may be a bit less fraught than in past years with many popular (read: politically potent) lines protected. Nevertheless, the body will likely take a hard look to make sure the numbers stand on terra firma. While councilors formally received the proposal Monday night, some began their reviews right away. Whether the mayor has a strong opponent next year or not, councilors will be on the ballot next year, too. After all, they may be called to account for their oversight (or lack thereof).