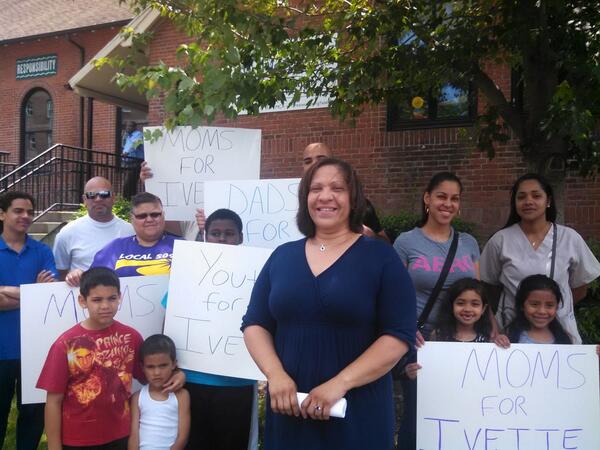 SPRINGFIELD—By January of this year, it was clear that the area delegation to Boston was in store was some major revisions. Amid retirements, resignations, and a few part-term incumbencies, several high-profile races are due for the districts that tough the city. For most of the cycle so far, the race to replace retiring Senator Gale Candaras and its primary’s ups and downs in particular have attracted the most attention. As historic as that seat may be, the city’s two open House seats also merit such notice.

This may begin to change as several of the campaigns in the two open House election have their kickoffs and/or formal announcements. Thursday Ivette Hernandez, running the 10th Hampden district formally announced off her campaign. On Monday, Ed Collins in the 9th Hampden will do the same.

Map of Springfield’s state House districts. The 10th Hampden is tan. The 9th Hampden is in bright green (via malegislature.gov)

Hernandez, a longtime union and community activist, is joined in her race by Carlos Gonzalez, president of the Latino Chamber of Commerce and Ward 3 Councilor Melvin Edwards. Running against Collins, the International Representative for the International Brotherhood of Electrical Workers, are Peter Murphy, Wards 2/8 School Committee member, and former at-large Councilor Jose Tosado. All are Democrats and nobody has filed to oppose the eventual nominees in the general election.

These races represent wide-open elections in two Springfield-dominated House seats. After redistricting in 2010, the city had three seats that were essentially only Springfield (the 9th Hampden has a precinct in Chicopee) and a fourth split among high-voting city precincts and the suburbs. Other seats represent Springfield, but only in those districts’ extremities.

These two seats also represent both the city’s history and its future. The 9th Hampden has been the rep seat of some of the city’s historic, often Irish, power brokers. Stretching from Atwater Park, an epicenter city’s political establishment, crossing Pine Point to 16 Acres, it is viewed as the only district of the city’s four to be both predictably Democratic and likely to elect a white-ethnic candidate without much of a problem. The incumbent, Sean Curran, is not seeking reelection.

The 10th Hampden, once held by Anthony Scibelli, has been seen as a Latino stronghold following Cheryl Coakley-Rivera’s election and the continued decline of the Italian population in the South End since. That district hugs the the Connecticut River, encompassing the North End downtown, the South End and Forest Park itself. Coakley-River resigned in April to take a job in the Hampden County Clerk’s office.

The senate race has sucked up a lot of political oxygen, partly because it touches parts of so many wards and neighborhoods even as it only actually represents a third of the city. Meanwhile, the conventional wisdom of the House districts could be upended.

As the Latino population has continued to grow in the city, it is not a surprise that more than one Hispanic candidate would seek Coakley-Rivera’s former seat. Gonzalez entered first, earning the support of Coakley-Rivera. Hernandez joined shortly thereafter. However, Hernandez was never getting into a one-on-one with the amiable, but connected Gonzalez. Edwards, who appears black, but is in fact multiracial, announced his bid shortly after Gonzalez. Gonzalez and Hernandez start out in the North End, splitting the vote not only by race, but also by geography. Edwards has a strong base in his ward, but one based on his role in the Maple Heights/Six Corners civic association, not race. He also has ties to the whiter, wealthier, higher-turnout Forest Park-based 6B precinct in the district, particularly his campaign manager Paul Martin,* who lives there.

Digging deeper, it is still easy to see why Edwards, a popular councilor from perhaps the city’s poorest ward, will have advantages within Wards 3 & 6. Like his colleague Tim Allen from Ward 7, he will likely tout his accomplishments in office. Yet the Latino vote overall, across all wards, will still overwhelmingly go to Gonzalez and Hernandez. The question is who will get more of it.

The key for the non-Edwards candidates will be whether either one can capitalize on other advantages and consolidate the Latino vote to overcome the geographical arithmetic.

Hernandez will have heavy support from labor both locally and statewide. The Pioneer Valley Central Labor Council, the statewide Service Employees International Union council and Mass Alliance, a coalition of progressive organizations, have endorsed her. SEIU Local 509 is making a specific investment. Calvin Feliciano, 509’s Deputy Political Director who used to run the local branch of SEIU 1199 community action, is on leave to work on Hernandez’s bid and other staff have been on hand to help her. Hernandez, an employee of the Department of Children and Families, is a member of SEIU 509.

Both SEIU 509 and 1199’s community action, which has been activated for her bid, provide Hernandez with critical foot soldiers. Hernandez said her campaign had already made 900 vote ID’s for her, that is commitments to vote for her in September.

Hernandez’s union SEIU 509 is lining up behind their member big time. (via Facebook/SEIU 509)

Other factors could boost Hernandez. The ranks of women in Springfield-area politics continues to wane and a desire to counter that could cut across socioeconomic lines in the district. Hernandez’s life story of fleeing domestic abuse to obtaining an education and jobs could also have universal resonance.

Gonzalez has people in his corner, too, but they may not have the same impact. Gonzalez and Coakley-Rivera faced off in short, bitter contest to replace Scibelli after he died in 1998. That made Coakley-Rivera’s endorsement of Gonzalez all the more surprising. Observers says it was transactional part of deal for Coakley-Rivera to get a job in the Clerk’s office.

The extent of Coakley-Rivera’s support of Gonzalez may or may not matter. New North, with which she has long been identified, has seen its political muscle atrophy of late. Despite throwing everything it could at her, Ward 1 Councilor Zaida Luna won reelection last year. At the same time, a School Committee candidate identified with New North, Norman Roldan, lost reelection. Gonzalez may be able to capitalize on his role at the Latino Chamber, but this cannot be measured at this time.

Another unexplored dimension is the substance of the race. Vague platitudes about regional equity and the awesomeness of Springfield are stock and trade in area politics. But voters in both hard-hit and well-off areas may demand more. By implication, Hernandez may have set the terms of debate when she enumerated how housing, childcare and education programs helped breed her current success and urged expansion of these programs.

The neighboring 9th Hampden has the making of surprising results, too, with a three way between Ed Collins, Murphy and Tosado. Handicappers in this race had given Collins an edge as he has deep ties to many political luminaries including Congressman Richard Neal and the capacity to wield union power. Like “Mahty,” that is Boston Mayor Marty Walsh, Collins, a prominent figure in labor, could attract large sums of money and manpower.

While Collins has long been politically active, he does not have the political organization that Walsh had. For at least a couple of years before Tom Menino announced his retirement, Walsh, a sitting rep, had been building a broad organization capable of catapulting him to the corner office at Government Center. Collins has admitted on the trail this is his first personal foray into electoral politics. Consequently, Collins, a 16 Acres resident, has been principally locked in a battle with Murphy for the historical Irish (and other white ethnic) base in the district.

Murphy has had some success attracting support within the city’s establishment, but not as much as Collins. Like Collins, he does not really start off with much of an organic base either, having never needed to build one after his two bids for School Committee, which he won by miles.

This has left an opening for Tosado to capitalize on the growing Hispanic population in this district, in addition to the decade’s worth of contacts he amassed while on the City Council. Geographically, Tosado’s advantage is less as he, like Collins, is from 16 Acres. However, Ward 5 Councilor Clodo Concepcion, who also serves as president of the 16 Acres Civic Association, may owe Tosado some favors for backing Concepcion for reelection last year.

Tosado’s advance is not certain, though. Labor is helping out Collins big time and the longtime union leader recently installed Chris Cappucci as his campaign manager. Cappucci, who has worked for campaigns from Springfield to Northampton, has also served as an aide to Democratic Rep. Paul Mark, a prominent labor figure in the legislature. He only signed on around mid-May, which could indicate a pickup in the pace Collins’s campaign. That may include more aggressive outreach beyond whatever natural base an Irish guy from Springfield would otherwise have. For what it is worth, Cappucci’s LinkedIn profile says he speaks Spanish, too.

Hovering over all of these races is dissemination of message and name recognition among the electorate. Turnout will be driven by the gubernatorial primary. Get-out-the-vote efforts for specific candidates in down ballot races are unlikely to scoop up many more people than the top-o-the ticket campaigns will anyway. Campaigns for House also need to spread their message carefully and do so without getting caught up in the factionalism of the governor’s race itself.