Executive Privilege: It Is the East, and Juliette Is…

LONGMEADOW—More than one publication has called her a nightmare for Republicans salivating at the chance of taking back the corner office on Beacon Hill. She has been making the rounds of political events around and across the commonwealth including the local Democratic Committee’s breakfast here.  Still, it can be difficult for Juliette Kayyem to gain traction in a gubernatorial field anchored by two prominent statewide figures.

But that is not stopping her.

“I make plans, not promises,” Kayyem says confidently. Her campaign is “Not just about platitudes, it is about obligation to make government work for communities.”

The mother of three and the wife of a recently confirmed federal Appeals Court judge, Kayyem has received accolades from pundits who say her background in homeland security, both on behalf of Gov. Deval Patrick and President Barack Obama, undermines the often built-in advantage the GOP inexplicably claims on safety and security issues. People plugged into politics in the Boston area say she has a phalanx of supporters in Cambridge. Kayyem is confident that if she is on the September primary ballot, she can and will compete to win.

As evidence, Kayyem noted her strong showing in the College Democrats poll and tying Grossman in one on the Cape. 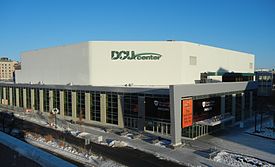 The Massachusetts Democratic convention will be held this Friday and Saturday. (via wikipedia)

That means making it past the convention. There is strategy and arithmetic among other campaigns as who is on or not on the ballot. As it stands, it might be advantageous to Treasurer Steve Grossman and to a lesser extent Don Berwick if Kayyem were on the ballot to split the women’s vote Martha Coakley is banking on. That influence of other campaigns is irrelevant if Kayyem has enough delegate votes on her own. Surveys show Kayyem hovering near the 15% mark needed to advance to September.

Still, the daughter of a Lebanese immigrant family, former Boston Globe columnist and gubernatorial and presidential aide appears “animated” to use her term, about the campaign. During an interview at the Starbucks while here for the breakfast, Kayyem said she’s loved campaigning so far and hearing from people. “People are very committed to this state” and “education and climate change and all sorts of things are about the future of Massachusetts,” she said.

Her tactic appears partly in the mold of her former boss, Patrick, by using her policy positions to grow the conversation while relying on a background in government service. Like the governor, she worked in the administration of president. Among her tasks was working on the response to the BP oil spill in the summer of 2010 after working for Patrick from 2007-2010. 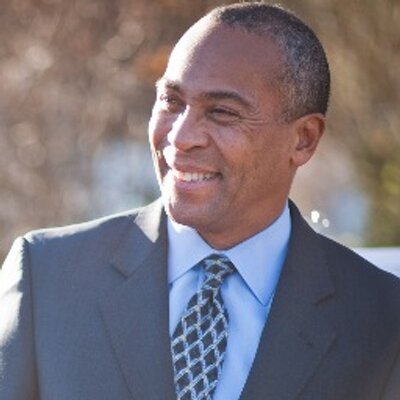 Kayyem served in Gov. Deval Patrick’s administration from 2007-2010. (via Twitter/@massgovernor)

Kayyem’s time at the Massachusetts Executive Office of Public Safety focused on emergency planning for disasters and other such events such as the 2008 Ice Storm. Brig. Gen. Thomas Sellers, as the head of the Massachusetts National Guard, fell under her purview and found her work both consistent and collaborative. “She did a great deal of work to pull together a bunch of state agencies” for disaster preparedness by giving everybody a stake in the process he told WMassP&I.

The marriage of these two could both appeal to the Democratic base and an electorate that, in her estimate, want bold ideas. However, she stresses such ideas can come from anywhere. Drawing a parallel to her federal service, Kayyem said, “I get that we are one state and many solutions.”

Kayyem says her platform is centered on investments in people and infrastructure, but investment in the former is not just about education. It deals with other dimensions of the commonwealth’s interaction with residents. As she is wont to do, Kayyem noted that she is the one to bring criminal justice reform into the discussion.

She laid out her proposed reform to Criminal Offender Record Information, the oft-criticized central record of criminal appearances in Massachusetts. Reforms could improve recidivism rates, which Kayyem says are costing the commonwealth $100 million a year and puts it on a path to another $1 billion in prison costs by 2020. These changes will require the political leadership to be focused onit, Kayyem warns. Despite virtually no satisfaction with the current CORI system, “The status quo is easy.”

Some reforms of CORI have passed in recent years, but chaanges that get at the heart of its inequities have been elusive. (WMassP&I)

Kayyem asserts the public is behind these and other components of criminal justice reform, in part because of the cost. Further changes include more focus on family reunification, community investment and workforce development. It may also call for more specialized courts for drug offenses or for veterans suffering from long term problems or more recent readjustment to civilian life. All together these are part of, “making reentry into a safety net” for people exiting the system.

Kayyem also takes credit for emphasizing climate change on the campaign trail. Hurricane Sandy, narrowly missed wreaking havoc on Boston and its environs, but the damage and the price tag ($4 billion) is impossible to ignore. She says her governor’s office would have a climate change staffer who would cut across departmental silos and implement policy to both prepare and deter climate change.

Hurricane Sandy’s impact in Boston was minor compared to the Greater New York area. (via tbha.org)

With more severe weather events likely as the climate shifts, Kayyem said the solution is changing how we live. Generators will need to move out of ground floors. New buildings along the waterfront would not have first floor residences.

Kayyem also said some basic changes could have the broadest impact. Specifically she noted the commonwealth’s notoriously slow adoption of modern technology. As an example Kayyem pointed to the report that exonerated the Department of Children and Families for the death of Jeremiah Oliver. It also made a simple suggestion: more case workers…and iPads. “We do not 21st century state government,” she said.

On these and other issues, Brig. Gen. Sellers said Kayyem had the “ability to lead and sort through complex situations.”

Throughout the interview, Kayyem noted key differences with her and her opponents, often Coakley, such as on CORI reform and marijuana decriminalization. When asked about this, Kayyem said these were substantive differences in policy. “Becoming governor is not a consolation prize and it is not a lifetime achievement award,” Kayyem said as she has in other interviews. She added, “Between 1990 and 2006, my party picked the next in line and look what happened,” a reference to Bay State Democrats’ losing streak until Deval Patrick, who beat then-AG Tom Reilly in the primary and won the general.

Mitt Romney in 2007. Kayyem warns against comparisons to the 2006 election. (via wikipedia)

But even as Kayyem noted that Patrick was a very different nominee, she cautioned not to view 2006 as too much of a model. At that time, there was a definite Romney hangover in the commonwealth. The national mood was decisively anti-Republican, or at least anti-Bush. While pleased with her showing in the caucuses, she acknowledges the hurdle the 15% threshold could be. At the same time she notes the party has not coalesced around anybody. Beyond the convention and heading into the primary, “The horserace looks really good from our perspective.”

As for defeating the Republicans and their likely nominee, Charlie Baker, Kayyem again emphasized the need for a nominee that is offering the “vision” for the commonwealth in 21st century. Writers like Hillary Chabot and Joe Battenfield at the Boston Herald have argued that Kayyem will also stand up better to Baker in part because of her background in homeland security. Thus far Baker and Republicans (when not embroiled in their own intraparty spats), have tried to portray themselves as superior managers to Republicans.

That tactic may have its flaws given Patrick’s decent approval rating. While all of the Democratic candidates for governor have run large sprawling organizations, Kayyem’s role inside the governor’s office may, at least she argues, better suited to counter Baker’s argument.

Although Kayyem is taking a page from Patrick’s book, she distinguishes herself from her former boss, too. She and he differ on Steven Crosby’s chairmanship of Massachusetts Gaming Commission. Kayyem has called for an independent review of the Boston Marathon bombing, including the death of a friend of Tamarlan Tsarnaev in Florida at the hands of the FBI (Mass State troopers were present).

Kayyem has argued that in a war of ideas she can succeed in the primary and defeat Baker. However, then she will need to govern and bring the changes she wants to effect. As it happens, since speaking to WMassP&I, Kayyem earned the endorsement of Worcester area reps John Mahoney and James O’Day. Kayyem scored perhaps her highest profile backing when House Majority Leader Ronald Mariano of Quincy.

“She has demonstrated that she is willing to fight for the values to which I have devoted my career,” Mariano said in a statement released by the Kayyem campaign. He ticked off a list of issues he and Kayyem were in sync on including education, veterans issues, criminal justice reform and revitalizing Gateway cities. “I am confident that only Juliette has the resume, willingness, and toughness to win not just in September but in November.”

But bringing those changes further out into the commonwealth including the Springfield area may mean looking past some of the traditional establishment network. Kayyem said she would reach out to the next generation of municipal leaders in cities and towns if the institutional avenues prove obstinate.

Here Kayyem took a moment to refine any criticism she has with her opponents in the field. The problem she sees is inertia, “it’s not Martha, it’s not Steve.”

But that criticism is not the message of Kayyem’s campaign. “What the governor can do is support the backbone of what makes our state works,” she said, part of which is empowering communities to fulfill their own vision. “If a governor can commit to those, what happens on a local level is so spectacular.”