Take My Council, Please: Community Unanimity on the Budget…

SPRINGFIELD—Weeks after the release of a budget with far less pain and sacrifice than years past, Mayor Domenic’s Sarno’s spending plan passed the City Council without so much as a hiccup. With up to four hearings scheduled to debate and pass the budget, only the first was needed and it ended with nearly an hour to spare before the Council’s regular meeting Monday night.

Throughout the budget hearing, it became increasingly clear on that Councilors were happy with the budget and that was borne out by the unanimous vote to approve the appropriation. Council President and Ward 2 Councilor Mike Fenton’s process for the hearing cycled through all of the departments and allow councilors to propose cuts. None were offered.

The only wrinkle known to Council watchers before the hearing—a request by at-large Councilor Tim Rooke to improve funding to the city Veteran’s Department—was, too, smoothed over. Rooke announced his support for the budget, having received assurances that more funding would be made available, pending “justification.” Justification is a legal term and part of vetting expenditures.

After the spending plan was approved, the Council moved on to the revenue line items, including the transfer from reserves to balance the budget. Fenton and Rooke voted no on a 9-2 vote approved the transfer. Rooke also cast the sole no votes for the establishment of the city’s enterprise fund (from which it collects the trash fee) and the transfer of those funds to the budget.

The regularly scheduled Council meeting was itself uneventful with virtually no controversial items. A collective bargaining agreement was withdrawn as the union had not voted on the proposal.  Numerous Board of Public Works reports for the placement of utility poles and lines were accepted. A lease for the Springfield Retirement Board was approved, too.

Councilor Tim Rooke said he was promised action on the veterans budget. (via Facebook/non-campaign)

Rooke asked why organs of the city were paying each other for such a lease. Comptroller Pat Burns said city was largely paying itself, but there is a minor net gain for the city. Independent municipal agencies like the Water & Sewer Commission and the Housing Authority share the city’s retirement system and therefore will pay part of that rent.

Several financial matters were passed including small donations to the fire department and a $75,000 grant for emergency preparedness. The Council formally accepted the city’s share of Chapter 90 funds, which the state appropriates for municipalities to use for the maintenance of roads. Newly installed DPW Chief Chris Cignoli laid out the plans for street resurfacing, traffic lights and other traffic design projects. The money had been reviewed by the Maintenance & Development Committee, which gave it the thumbs up. The full Council vote was  11-0.

There were several financial transfers within and across departments. One million dollars was transferred within the police department to capital needs from the police academy. Police Commissioner John Barbieri said the academy is not expected to happen before the new fiscal year and so the money from this fiscal year will be spent in a different account and then replaced when the new fiscal year begins. Another $580,000 was transferred among the accounts of the city’s pay as you go capital program. 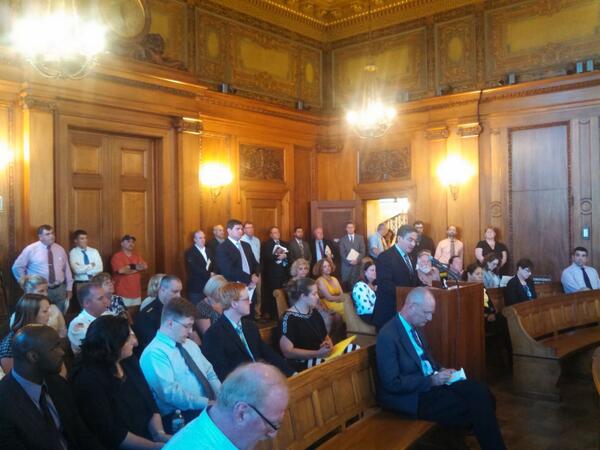 Nearly all of Sarno’s cabinet was on hand to defend and/or describe their department budgets for the Council. It proved unnecessary. (WMassP&I)

Another $100,000 was transferred with Parks & Recreation for the maintenance of terraces in the city. In past years, funding to maintain the terraces in parts of the city had been cut, often leading to complaints from residents and councilors. Instead, on Monday, another additional $100K was added to that budget line.

Tina Quagliato at the city’s Office of Housing and Neighborhood introduced a couple of quitclaim deeds for tax possessed properties. The deeds are part of the city’s abutting lot program, wherein owners’ of neighboring plots merge the property with their own for green or recreational space. The Council also cleared a betterment lien on another property.

While an ethics ordinance amendment remained in committee as its sponsor, Edwards, was absent, two other ordinances did get final approval Monday night. At-large Councilor Tom Ashe’s two year moratorium on pawn shops passed second step on a voice vote and received final approval from the Council with a unanimous recorded vote. The moratorium will prevent new pawn shops from receiving license from the police department for two years. Those shops whose licenses were suspended will not be eligible for a license after their suspension ends, unless the Police Department or a court overturn the suspension itself.

Finally, the Council also granted final approval to a tweak to the city’s leash law for dogs. In its previous iteration, dogs could be unleashed in public if the animal could be kept under control by “voice command.” Because it is impossible to know whether an animal is under “voice command,” the Council’s changes to the ordinance only allow a dog to be off of a leash if with its owner in an open space in a public park, such as to play Frisbee. This, too, passed both second step on a voice vote and third step on a recorded unanimous vote.

Provided everything goes according to plan in the budget, the swift passage of the budget may prove to be an unequivocal win for Sarno and for his Chief Administrative and Financial Office, T.J. Plante. Typically, councilor such as Fenton, Rooke and Ward 7 Councilor Tim Allen could be relied on to oppose the mayor’s budget for any number of disagreements over the budget’s revenue or spending items. Not this time. The budget is not perfect and the uncertain fate of both the casino law and, if left untouched, its economic benefit, leaves long term question mark.

Some may argue it is a bad thing there are no fiscal wars in Springfield this year. On the other hand, it leaves more political capital and RAM for perhaps more important battles.