With 3-Year Headstart, Sheriff’s Race Starts in the Nick of Time… 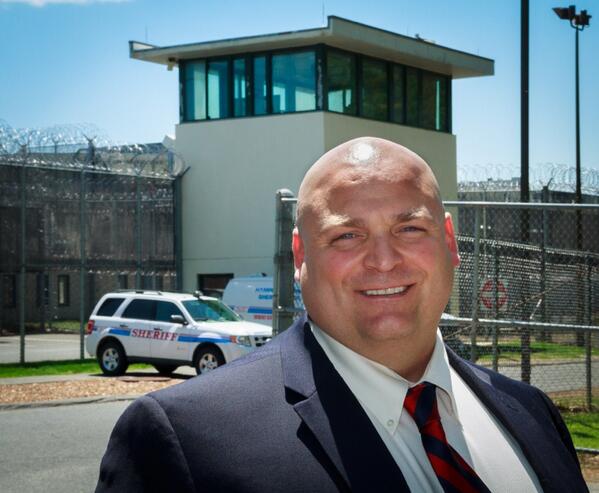 SPRINGFIELD—Shortly after longtime Sheriff Michael Ashe announced that his current six year term, slated to end in 2016, would be his last, the County’s correctional facility was abuzz. Ashe, a towering figure both at that Ludlow facility and in area politics, had systems that worked and a great reputation. While the Valley’s local political universe celebrated Ashe’s career, the employees there had “tradition” and “a great thing.” They worried that a new sheriff in town might upend both and not for the better.

If the response and concentration of Sheriff’s department employees at his announcement was any indication, Nicholas Cocchi is looking to set their minds at ease. Tonight amid throngs of supporters at the Basketball Hall of Fame, Cocchi declared his intention to seek the office of Sheriff in 2016.

However, Ashe’s announcement, three years before he will actually leave office, was an intentionally long period of time to give anybody interested in doing the job as he did to learn about it. That period of time also had the potential to let a professional, otherwise not already in politics, to cross over in the other direction. As of today, Cocchi, the sheriff’s department deputy chief of security took the plunge.

The race to replace Ashe is expected to draw lots of interest. The plum perch, both visible and overseeing a large number of employees (Ashe is said to interview everybody personally he hires at the jail), comes both with a sizable salary and prominence. Whether a pol looking to gain respectability (and a pension bump) or one more ambitious eyeing even higher office, it has a strong allure.

He joins a growing list of civil servants, rather than pols, seeking countywide offices to cap their careers. With Hampden County legally abolished, its offices are actually state positions within the county lines. Many offices (other than district attorney and sheriff) have seen their independence narrowed over time. However, it has given careers professionals in those offices the opening to run and win. 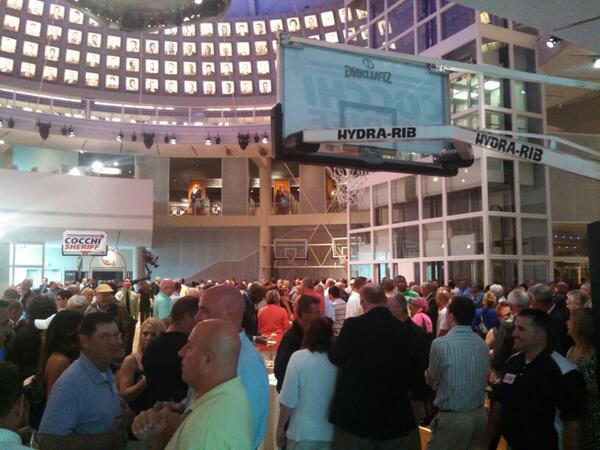 At his kickoff, which jammed the parking lots at the Hall, Cocchi put that trend into more explicit terms. He urged those gathered to “protect” the Sheriff’s office from politicians who might use the seat as rung on a political career latter.

Cocchi, a 21-year veteran of the jail and lifelong Ludlow resident, has a burly build that evokes his career as a correctional officer, but is softened by a welcoming and friendly mien. Displaying an eagerness to carry on the progressive approach to corrections for which Ashe is well-known, continuity is a huge part of Cocchi’s platform.

During the interview, Cocchi emphasized the importance of reentry in what the Sheriff’s office did and what he would do as sheriff himself. “We take people who come at the lowest part of their life,” he said, but “we offer the opportunity for positive change in people’s lives.”

Cocchi emphasized the branch of the Sheriff’s office that is dedicated to the rehabilitation and human needs of inmates. Ashe’s own background as in social work, not law enforcement background.

Security, both for staff and inmates, is critical for success, but Cocchi said success at the jail is about a lot more. Being a people person is critical, “You have to be able to talk to people, work with people. When you have their trust, you’ll get their sincerity and their best work.” But that applies to the inmates as well, “You will get miles, not inchest form the population because they trust you.”

Cocchi was reluctant to project an agenda or platform that would suggest any departure from Ashe’s current administration, a likely theme of any 2016 sheriff candidate. However, he did outline some of the priorities of a Sheriff Cocchi administration like addressing the opiate crisis.

he and jail staff had observed the problem brewing long before it caught public attention, Cocchi said addressing opiates, from a jail’s perspective, requires a three-pronged approach: enforcement, education and treatment. More treatment beds are needed, though, to help those coming in and keep them from coming back. “Does a person who is a first time offender for opium abuse belong in jail or a treatment bed?” he said. “I am going to tell you they belong in a treatment bed.”

But the opiate crisis also is notable because it has affected every community in the county and every strata of society. “I see hockey players that I coached…walking in through the door just as I see people we might have played against in Springfield, Chicopee, Holyoke,” he said.

Asked what in five or ten years what the item of the day among the corrections community will be, Cocchi said youth programs. “I hope we are talking about it tomorrow, but we will in my administration,” he said, noting that the jail already had a “badges for bats” program to teach young people in the community to play baseball.

Challenging kids to do better as a coach has apparently been a rewarding endeavor of Cocchi’s, lessons from which he would apply to the sheriff’s office. He said a goal of his administration would be do what it could to help at-risk youth find a stabilizing force in their lives. He said it was paramount to give kids a chance to “to enjoy their youth and future opportunities for future success.”

Just as you would challenge kids to do better, he would do the same at the head of the sheriff’s office. It is a never ending effort. “Nothing is ever given to you. It is earned. Once you start reading about how good is, you have to pack it in,” Cocchi said.

Of course the business of running the jail is heavily administrative. Cocchi says like any manager, or Ashe now, he would look for more funding, but only for “evidence based programs,” nothing “frivolous.”

There have been difficult times, particularly during the recession a few years ago and Cocchi said it required juggling. Although the legislature does not micromanage the Sheriff’s office directly, some programs can absorb the cuts better than others. Cocchi said even small cuts to emergency stabilization, for example, could affect the inmate with mental health problems. Such inmates could decompensate quickly without proper treatment. That in turn can create problems for staff and the inmate population.

Other areas could handle the fiscal stress better. During the recession, Cocchi said the department avoided layoffs. There were HR changes, but there was also reclassification of inmates to save money. A medium security inmate may cost about $40,000 to house, but some could be safely reclassified to low security or pre-release at lower cost.

“How are we fair to our staff and the offenders,” Cocchi said, by “throwing our arms in the air?” as with layoffs or indiscriminate cuts. Rather, “We get creative,” he continued, “That’s the tough work.” 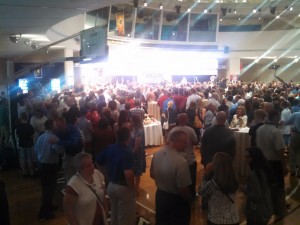 Cocchi’s rock star kickoff before more than thousand people was laden with political signals to opponents. For a first time candidate and any office, the event was well choreographed and filled with pomp and circumstance. Cocchi even descended to the Hall’s ground floor via elevator.

Many potential rivals may not be deterred. Those pols whose current positions run on a municipal cycle have little to lose by competing. Those running on a state office cycle would have to risk their seat to seek the Sheriff’s office.

On the other hand, the most immediate impact on the shape of the race may be on any other professional within the sheriff’s office, who may balk at such a showing by the colleagues. Despite that showing, it is not the same as a political organization. The three year start gives Cocchi the chance to build one ahead of the 2016. It also has the added benefit of allowing him to go back to contributors for the max $500 contribution in each of the three years before the election.

Because this announcement predates even any announcements for President of the United States, much of these politics will play out over the coming months and years. In his interview at least, Cocchi was focused on living up to the legacy he hopes to inherit from Ashe, “It is a key position when it comes to economics, public safety, government,” Cocchi said, “and I’m the guy.”