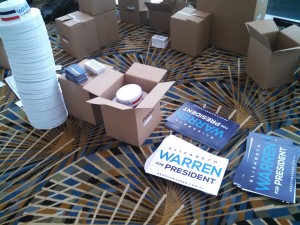 DETROIT—On the second day of one of the left’s most prominent organizing and issues conferences, Massachusetts’ own US Senator Elizabeth Warren remained as hot a ticket as she did when the event was held in neighboring Rhode Island during her contested 2012 election. Prompting several standing ovations and a sea of “Warren for President” signs at Netroots Nation, the Cambridge Democrat laid out her vision of where progressive stand and the stakes involved.

Warren, who has by now grown accustomed to her rock-star status, seemed a bit surprised by the crush of signs and paraphernalia. Still, it took little for her to get past that point and what she wanted to discuss was in near total sync with the folks in the room. 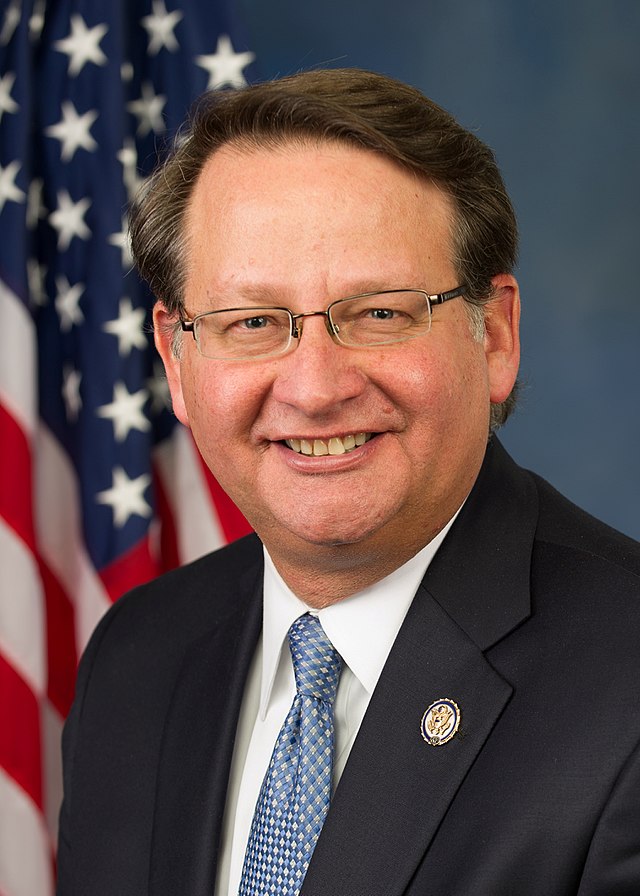 Warren’s appearance in the Motor City served a dual purpose. Besides appearing before her fans, Warren was also on hand to help out US Representative Gary Peters, who introduced her Friday morning. Peters, who delivered a fiery speech of his own, is running for US Senate to replace retiring senator Carl Levin. In addition to her appearance at Netroots, Warren headlined a fundraiser for Peters, whose House district includes eastern Detroit and some of its northern suburbs.

Warren hit on a number of high notes such recalling the battle for the creation of the Consumer Financial Protection Bureau and noting the power of special interests and their lawyers, lobbyists and, of course, congressmen.

The torrent of signs urging Warren to seek the presidency, however, played out even as Ready for Hillary, the erstwhile pro-Hillary SuperPAC was trying to gain a foothold at the progressive conference. The Boston Globe, which sent reporters ostensibly to cover Warren, but the 2016 presidential election by implication, wrote about the conflict within the left between its love for Warren and its realization of Hillary Clinton’s strength as a contender. Ready of Hillary, it must be noted, is not run by Clinton and has long sold itself as merely laying the groundwork for more overt electioneering should the former Secretary of State seek the top job once again. 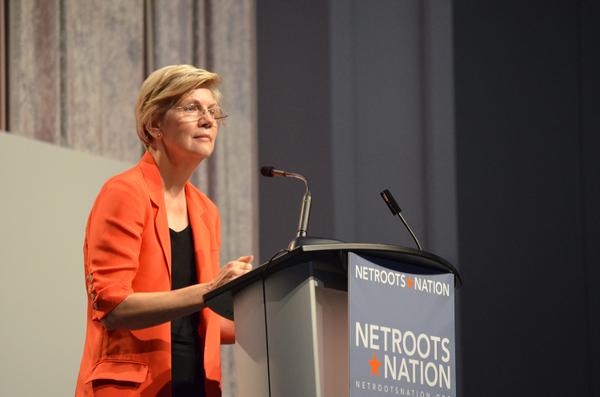 Warren has repeated and repeated her intention to not run for president. Still a hopeful left and the punditocracy have stoked the fires of such a run. In fact, outside of Massachusetts, it may be difficult to see how unlikely Warren’s run might be even if she actually wanted to do it. Many of the key staffers in Warren’s operation have held positions in state and regional political realms for years. They have aided in the election governors of Massachusetts and helped Democrats in the first in the nation primary across the border.

For Warren to actually run, she would need this team, not one for import elsewhere in the progressive movement, to carry her to victory as they did in 2012. However, many in this team also have deep, deep ties to the Clintons. Some may very well break Warren’s way, just as other Hillary people did toward Obama in 2008. However, at a minimum, they would be put in a quandary (especially with Clinton probably more popular today than in 2007-2008) and at worst would stick with whatever commitments they have to Clinton.

A Warren run seems improbable even if Clinton stays on the sidelines in 2016. After all, she is more flexible and, in some areas, more influential as a senator than she would be as president. However, the question today and in Detroit in particular is between those two women. Until that framing changes for certain, Warren seems certain to stay put.