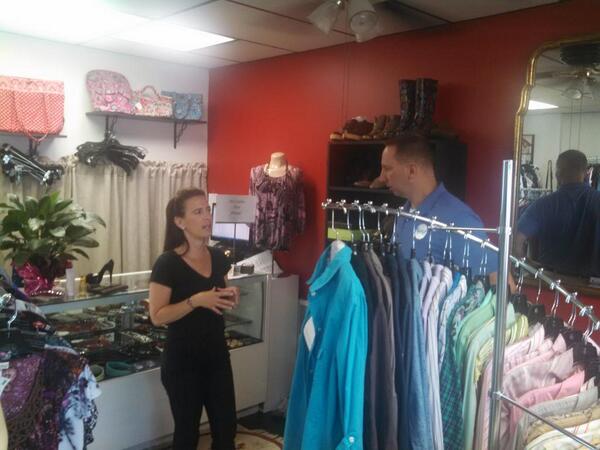 BELCHERTOWN—The pitch begins easily enough for Chip Harrington. He enters one of the businesses facing the Historic center of this sprawling Hampshire County town and strikes up a conversation.

“Hi, I’m Chip Harrington, running for state senate,” he says greeting a pizza shop proprietor. After a bit of banter, he drops his literature and moves on. In other stores, the owners have a lot more say and chat with Harrington for a while. The economy is a big topic of conversation as it has dragged down business, even here in this wealthy, heavily rural community.

The 1st Hampden and Hampshire district is neither the state Senate’s most sprawling district, nor its most compact, encompassing Belchertown, East Longmeadow, Granby, Hampden, Longmeadow, Ludlow, Wilbraham and about a third of Chicopee and Springfield each.

Harrington was the first Democrat to jump into the race when Candaras’ retirement became imminent. At the time, most assumed Rep. Angelo Puppolo would enter the race, but when he did not it prompted a flood of candidates.  Debra Boronski is the only Republican and Mike Franco is running under the America First banner.

Belchertown could be fertile territory for Harrington. Each Democrat has their own brand of experience, but as the town shares some characteristics with his native Ludlow, many voters here might be receptive to Harrington’s pitch. Belchertown is somewhat split between a small town parts of Ludlow and the more liberal orbit of Amherst. This fissure could have a bigger impact in the five-way primary as Belchertown has trended toward Democrats in general elections.

Harrington’s Belchertown trip served to highlight his experience, but also showed a campaign seemingly confident it can overcome its biggest presumed handicap: sharing a geographic base with Saunders. The two have discussed this conundrum, but it is Harrington who has seemingly overcome it more aggressively, already targeting Springfield and campaigning hard in Allen’s ward.

Harrington claims to sense stronger support at home as well. It may not be particularly surprising, though. After Rep. Thomas Petrolati, Harrington may be Ludlow’s next most visible figure in civic and political circles. He has held numerous offices and regularly hosts public access television program.

Not everyone loves Harrington and he has neighbors who strongly favor Saunders or another candidate, too. Yet it is not clear their political influence can counteract the base Harrington has  built on a personal level after twenty plus years of public life. The hometown love is mutual. He recalled with some glee how he and a few others produced a historical documentary on the old mill town. In the process, he got to hold Ludlow’s founding documents from the 1700’s.

Consequently, the school committee member feels the freedom to make inroads and friends elsewhere in the district. A Belchertown supporter provided him with a list of businesses to visit. Harrington had already received some Hampshire County support with the endorsement of Sheriff Robert Garvey, in part, because of Harrington’s own correctional experience at Hampden County’s jail. He was armed with knowledge of the local debate over the former Belchertown State School in case it came up (it did not). 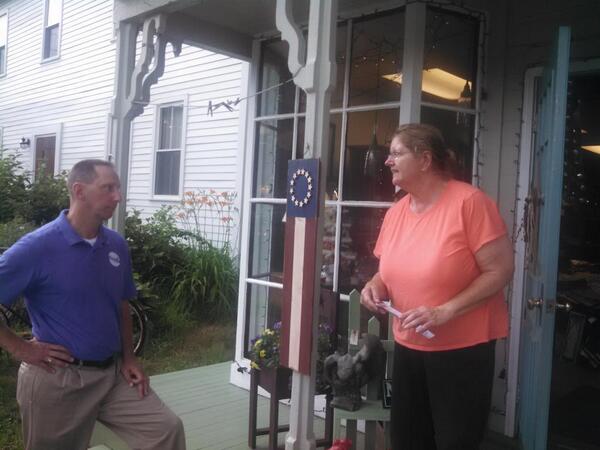 Speaking to the owner of Swift River Crafts on Main Street, Harrington touted his experience in town affairs, but also expressed solidarity with her as an owner of his own store one town away.

“The small businesses get hit all of the time,” Jacqueline Dupre, who has been selling since 1976 said with a lament. People are “so afraid to spend,” she added she had never seen it this bad. Dupre says she is lucky because she does not have any rent to pay as the owner of her store’s building.

All of the candidates are talking about the economy, but such conversations let Harrington highlight his entrepreneurial venture as a qualification. He tells Dupre that people feel this economic malaise is particularly bad. Harrington recalls his nephew Matt saying that during his four years at college, the Pioneer Valley’s economy appears to have declined further than it did during the 22 years before that. The solution, in part, Harrington explains, is to get the commonwealth to help small business more.

Other merchants, like Tammy Wozniak of Chicopee, admitted that they had been unable to read up on the election as much as they would like. Wozniak, a teacher, has been juggling teaching and her consignment shop opposite the Town Green since the store opened in Decemeber.

“It’s been crazy holding down both jobs,” she told Harrington as they discussed their businesses and teaching. She seemed interested in Harrington’s campaign. However, she told WMassP&I in a brief interview that while she is usually up on the goings-on of politics, she “will be spending some time researching the candidates” in this race.

Harrington has made a play for “moderates” in the district, although the primary has not been overtly fought on the ideological spectrum much (via Facebook/Harrington campaign)

Most proprietors were at least eager to learn more. Harrington freely deems himself a moderate in the race, best able to win over the purplish district. Last week Harrington called for the governor to sign a recently passed welfare reform bill. This particular legislation has not yet inflamed the left, which generally views (often with good reason) such bills as politically expedient and classist attacks on the poor. Harrington focused mostly on the provisions that give tax breaks to businesses that employ the indigent, but walked a fine line. No other candidates have opined on it.

The tenor of the primary has been largely devoid of sharp ideological differences or accusations of ideological purity. Rumors of Harrington’s support for Republicans in the past have bubbled up, but little has come of them yet either factually or politically.

Eric Lesser, center, is Harrington’s only equal in terms of individual ubiquity and on the ground work thus far. (via Facebook/Lesser campaign)

The second half of Harrington’s Belchertown schedule was rained out, although he said he would return another day. Ducking into McCarthy’s Pub, Harrington mentioned he had the support of the owner, whom he also described as more conservative than himself. Over lunch, Harrington emphasized his experience again as both businesses owner and town official that, in his estimate at least, makes him the most qualified. Harrington has largely eschewed negative campaigning, but he did jab his opponents a little. Perhaps alluding to Lachiusa, Lesser or Saunders he said he wants to be state senator and is uninterested in “the next office.”

Lesser has, he said directly of the former White House aide, “a lot of DC money,” which Harrington framed as queuing up conflicts of interest. He allowed that until campaign finance reports come out later this summer, it may hard to know what, if any, conflicts might arise.

It is widely assumed Lesser has a financial advantage. He and Harrington, on an individual level, have outworked the rest of the field thus far, campaigning at a frenetic pace and appearing everywhere, although a much larger corp of volunteers magnifies Lesser’s efforts. Shoe leather always appeared to be Harrington’s strategy as he was undeterred by Puppolo and the quarter million dollar war chest the Springfield rep had socked away. 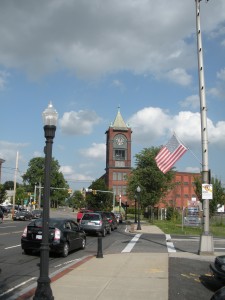 Driving back to Ludlow, down winding roads that were by turn bucolic and suburban, Harrington alternated between musing on his hometown’s history and planks from his platform. He reiterated his call for more Springfield cops to get a handle on crime, the perception of which, he said, is worse than the reality. As the car approached the Ludlow-Indian Orchard bridge (the part of the city across which is outside the district), the former Ludlow Mills loomed. Harrington offered some trivia about first Portuguese immigrants (arrived 1910) who, among other groups, came to find work there.

Of course that was a different time. The mills are long closed and jobs no longer plentiful. Although functioning as a suburb of Springfield, the effects of a weak regional economy resonate in Ludlow too. Harrington described his own tough months at the store shortly after the financial crisis of 2008.

While he did stop by his store in Ludlow, Harrington’s plans were mostly elsewhere in the district including attending the final night of East Longmeadow’s summer carnival and, until it was clear the weather would not cooperate, canvassing in Springfield. Though increasingly confident in his hometown, Harrington said his campaign is “working Ludlow as much as anywhere else,” as Saunders has his supporters and Lesser has made plays there as well.

“I’m not going to take it for granted,” Harrington said.