SPRINGFIELD—On Edward Collins’s hand is a faded scar from a conveyor belt injury he sustained at the power plant that dominates the West Springfield skyline. That scar also marks the beginning of his path from rank and file unionized worker to a prominent figure in the New England labor movement.

Then owned by Western Massachusetts Electric Company, the plant was coal-fired and Collins’s job was to get the coal off the trains and onto a belt to be pulverized. The belt nicked his hand, but Collins was lucky. Several workers were badly burned in flash fires caused by coal dust exposed to the shed that thawed frozen railcars.

“I was a member of the union, but I didn’t have any other interest than any other rank and file,” Collins said during a recent interview. “That got me active.” He started attending meetings and a fellow union member late nominated him to be recording-secretary. Thus began his climb up the union ladder.

“He is one of the most genuine hard working fighters for justice that I have ever met,” Massachusetts AFL-CIO President Steven Tolman told WMassP&I.

Map of Springfield’s state House districts. The 9th Hampden is in lime green. (via malegislature.gov)

Collins, an International Representative with the International Brotherhood of Electrical Workers, is one of three Dems running for the 9th Hampden House seat opened by Sean Curran’s retirement. Peter Murphy, a school committee member here, and former Councilor Jose Tosado are also running. The district snakes from Atwater Park and East Springfield to 16 Acres via parts of Pine Point and Indian Orchard, encompassing one Chicopee precinct. The historic, arch-Democratic and largely Irish seat has been held by storied city political figures—both good and bad.

Besides a platform of jobs and revitalizing Springfield, Collins’s has pitched his labor experience working on social and economic justice issues. He also compared the responsibilities of a union official and constituent services. Fail to measure up and you can get voted out.

Most legislators might give up their seat for a job like Collins’s. This seat is attractive enough to prompt Collins to do the reverse. By comparison, Tolman spent 23 years in railroad unions before serving seventeen in the state house and senate from Watertown. He became state AFL-CIO president in 2011.

“I have never done anything in my life in the most traditional way,” Collins said over coffee at Hot Table near Western New England. “A couple of years ago I reached a point where I could afford to leave this job any time.”

Collins’s run is a function of timing, but as labor has grown dissatisfied with some politicians, it has turned to its own members to run. That does come with a cost if labor loses effective organizers, stewards and leaders to politics.

“It is really is important,” Tolman said, who came up in the labor movement a few years behind Collins. “We need to have a lot more people who are ordinary working class people,” underscoring he meant both union and nonunion workers alike.

“I think that the leadership in the House and the Senate often run the show,” said Ronald Patenaude, President of the Hampshire/Franklin Central Labor Council. But Patenaude, who only became active in unions fifteen years ago, added, “Somebody with his experience and longevity in the labor movement garners a lot of respect from those us who are a newcomer to the labor movement.”

Collins’s own family has deep roots in the city. His father was on the school committee from 1947-59. Brother Christopher is on the School Committee now and Timothy is the iconic head of the teachers union in Springfield. Growing up, Ed Collins recalled he and his brother helping out Charles Ryan by delivering a campaign newsletter. Collins himself has always lived in the city, but for a stint in the navy.

“His parents instilled in him and his brothers the importance of being involved to make things better,” Tolman said.

After a career like his, not surprisingly, jobs dominate Collins’s platform. “He is a very strong Democrat in terms of workers’ rights, in believing in fairness,” Patenaude, said.  “He’s got a lot of integrity.”

Collins observed that while the 9th Hampden has no market on struggles in the region it is a mix of comfortable and poor. However the well-off households may belie the region’s economic troubles.

“Even some of those who are doing very well may have to drive 30, 40, 50 miles” for work, Collins said. He encountered one woman while canvassing who told him she drives to Westborough everyday for work. “That is becoming more and more common,” Collins lamented.

The lack opportunity poses an almost existential threat to the area. “Declining population is one of our biggest challenges, Collins said. “That is almost entirely due to loss of economic opportunity.” 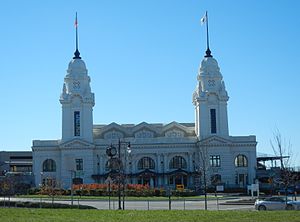 Candidates for other offices like Eric Lesser have also argued for more rail service, having seen the benefits of increased service to Worcester’s Union Station, above. (via wikipedia)

While acknowledging that it may never return to the same level, Collins advocated more manufacturing jobs, perhaps by leveraging the state’s venders to consider placing facilities here. Such firms, he said, often not only employ workers, but also buy from area firms and contribute to local worthy causes.

Collins also cited funding the Quinn bill as a matter of fairness. He emphasized the commonwealth’s abdication of its share of the deal “left it in the lap of cities and towns.” Some communities have tried to drop the state’s share, but many have ended up paying it.

Tying a broader answer about municipal finance to how he would pay for his other initiatives, Collins affirmed his support for a more progressive taxation. In turn, this could relieve municipalities’ burden of relying on property and excise taxes to fund operations.

“Long term, we have to find a way to more efficiently collect revenue at the state level from where the money is and get it to the cities and towns,” Collins explained. He supported in principle Gov. Deval Patrick’s plan to raise the income tax, but increase the exemption so as to keep middle class taxpayers from paying more. However, he also thought that the governor did not handle it well politically. 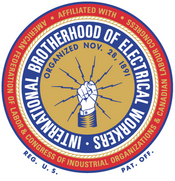 As an IBEW International Rep, Collins has a number of roles within New England. The IBEW represents employees in both the public and private sector, including utilities, the MBTA, building trades and remaining manufacturing. Collins’s role includes assisting locals with contract negotiations, administering organizing activities and overseeing locals’ compliance with federal and state laws.

“It is a pretty broad portfolio of activities that we have,” Collins said.

One activity that Collins says he misses is being training union stewards. Now centralized in Washington, he still helps train worksite union representatives via the Pioneer Valley Central Labor Council.

The position also requires a lot legislative legwork from workplace safety to minimum and prevailing wage laws. Indeed, Collins said much of his time recently has been advocating on the minimum wage, unemployment laws and paid sick-leave. Collins says his experience working with legislators would make him effective. “The squeaky wheel gets the grease…and I know how to squeak,” he said with a smile.

“I can be effective without ever rising through the ranks of leadership,” he said. “This is the last job that I will ever had or ever expect to have,” assuring there would be no need to put something other than the 9th District first. At the same time, having negotiated with national and international concerns, Collins added that he can build consensus to deliver for Springfield and the district.

WMassP&I contacted employers like WMECO where Collins negotiated contracts to get a non-labor perspective. However, a spokesperson for the utility’s parent company said so no one from the period when Collins was bargaining still worked there and thus available for comment.

Another theme that popped up in interviews with labor leaders was Collins’s penchant for parliamentary procedure. “He was always acting as parliamentarian because he knows the rules,” Tolman said. Patenaude echoed that sentiment, saying Collins was “a brilliant parliamentarian.”

That reputation began by chance. Collins challenged his local’s president due the latter’s poor management of meetings. “I didn’t have any particular knowledge or ability at parliamentary procedure, I thought I think I could do it better than he does.”

He also has a crisp command of state Democratic party rules. During a redo of the Springfield Ward 8 caucus to select delegates to the state convention, Collins, who attended merely as a candidate for an office that happens to cover Ward 8, provided much needed expertise on the proper procedure. 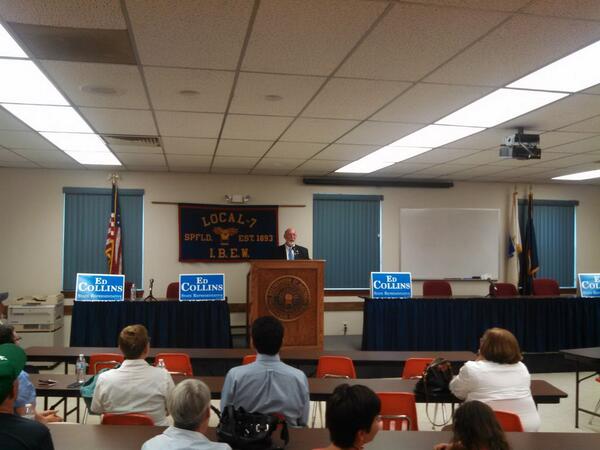 Collins at his kickoff in June (WMassP&I)

In one sense, this is hardly Collins’s first rodeo. During his kickoff at IBEW Local 7’s hall in Springfield, Collins and supporters recalled the many campaigns he worked. Being the candidate yourself is different. “It is a lot more stressful. I am enjoying it, whatever the outcome I am glad I did this,” he said.

At that kickoff in June, Collins said his campaign had knocked on 2000 doors and that even that was just the beginning. Labor has just begun spending and reaching out the union households on his behalf, although more is expected.

A nagging dimension of this race has been demographics. Some have shorthanded the race as two Irish guys battling for the white vote while a Latino seeks to capitalize on the changing face of Springfield. 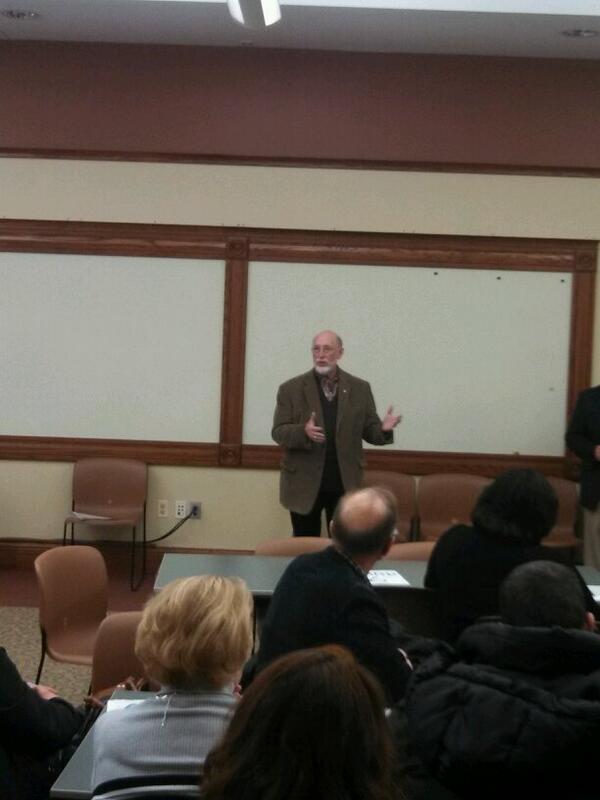 Collins campaigning at the Chicopee caucus in February (WMassP&I)

“I think that the ethnicity stuff is overplayed,” Collins said calling it a “disservice” to voters. He noted all of the candidates have stepped outside such rigid identity politics in this race or in the past. Geography might be more of a problem as he and Tosado share 16 Acres while Murphy resides in East Springfield. Although, he mused jokingly that, “I may be too liberal for the Irish but too Irish for the liberals.”

“I don’t think you could put a piece of paper between the three of us on the issues,” Collins said. That leaves the race up to voter contact. “We all seem to have one thing in common: the amazing number of people who do not even realize there is a race.”

In that sense there may yet be more room for labor to help get another member of the family into the legislature, somebody both the movement trust and who has the background to win the race from the streets up.