Seeking a Two Year Term of Endearment for Velis & Westfield… 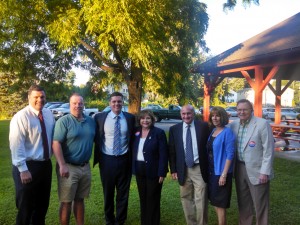 WESTFIELD—The usual term in the Massachusetts House of Representatives lasts two years, about 19 months of which is in session. After that campaigning begins anew. John Velis has had only about 106 days in session before he needs to prove himself to voters once again.

With about 60 supporters at the Sons of Erin, Velis, an attorney and officer in the Army Reserve JAG Corp, kicked off his bid for a full term representing the 4th Hampden House District about a year after he returned from a law and order mission in Afghanistan. This past April, he won a special election to fill the seat becoming the first Democrat to hold Westfield’s House seat on Beacon Hill in decades.

The special election was precipitated by the resignation of Don Humason, who had been elected to Mike Knapik’s senate seat, the 2nd Hampden & Hampshire district, following the latter’s departure for a job at Westfield State.

Westfield entirely and exclusively constitutes the 4th Hampden. Republicans had held the seat since the 1970’s when none other than Velis’ uncle, the retired Superior Court Judge Peter Velis, won it for the GOP. The younger Velis ran against freshman at-large City Councilor Daniel Allie as a conservative Democrat ultimately winning by six points on the April Fool’s Day Election. On April 16 he took office with Reps. Daniel Hunt, Daniel Ryan and Roselee Vincent, all Democrats from Suffolk County.

Allie will again face Velis in November. As Velis worked the crowd, he had impromptu mini-strategy sessions between himself and supporters under the Irish community organization’s covered outdoor picnic grounds on the city’s south side near downtown and the river.

Massachusetts political donation caps follow the calendar year rather than the election cycle. That means that anybody who maxed out to Velis during his special election this year cannot donate again even though this is a separate election. Campaign sources have noticed some complications with this (although Allie would encounter exactly the same thing), but, the same sources said, new donors and those who did not max out have balanced that out.

Some voters that Velis had won over in April remained eager to again cast a ballot for the 35 year-old Democrat. Pattie Gary, an independent who typically votes Republican, took a break from preparing the food at this weekend’s Westfield Fair to lend Velis her support in person, “Because he feels the way I do.” Pulling out a clipping of an Op-Ed by Velis from the Westfield News Gary continued that he doesn’t “vote for one party or the other. He votes for the people!” 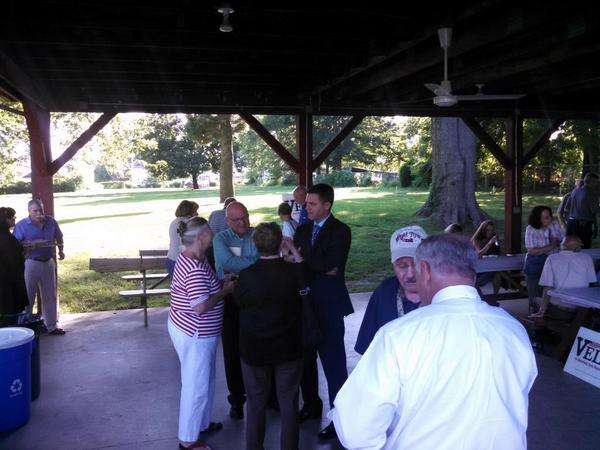 The crowd, mostly supporters, featured a few notables including Patrick Leahy, a candidate for the Democratic nomination in Westfield’s 2nd Hampden & Hampshire District; Senator Gale Candaras, now a candidate for Registrar of Probate; and Kevin Sullivan, at-large School Committee member. Sullivan’s brother Bo, a radio host, and father attended too. For a political kickoff, there were a conspicuous number of attendees around Velis’ age as well, a potential boost to the new rep in this fickle, but solidly purple city.

Peter Velis introduced the representative commenting that in just three months, his nephew had been incredibly effective and true to his commitment to serve as a legislator for Westfield and brought in financing for city institutions. “He’s the best state rep the city has ever had,” himself included the former judge said to laughter.

Candaras, who served with Velis on the legislature’s Joint Judiciary Committee praised him for what she saw in him during their short tenure together. Noting his military background she added, if reelected, “I believe he will be a rising star.”

The candidate himself kept it brief joking about the effusive praise from his uncle and Candaras, “After those two speakers do I need to talk?” Velis noted some of the local items he was able to secure in the budget including money for Noble Hospital, the city’s planned senior center and other assistance for the business community.

Mark Hanrahan, the Chair of the Westfield Democratic City Committee, said Velis’ election and campaign have made party elders “excited about Westfield politics for the first time in a long time.” Now, Hanrahan said, supporters are “renewing the groundswell we saw in the spring.”

During a brief interview after he addressed supporters, Rep. Velis said despite only holding the job a few month he has “absolutely loved it.” “I am humbled to be given the honor of being their state rep,” Velis said referring to Westfield voters.

Velis joined the legislature too late to file bills this session (although members like Rep. Hank Naughton did file budget amendments on his behalf). If reelected, Velis will have that chance early next year, but right now he is in the process of doing a business tour and forming a citizens advisory group to glean what the Whip City needs from Beacon Hill.

“I’ll have that be the basis for the legislation to follow,” he said.