When Voters Elect, Will They Choose Saunders Select?…

The opening of a seat on the Ludlow Board of Selectman offered an opportunity for Aaron Saunders, then Chief of Staff to Senator Gale Candaras, to make his own mark on the political scene. Like others elected in 2008, however, Saunders would find it not exactly the easiest time to be taking office.

The recession took hold later that year, buffeting Saunders’s first term with the fallout of depressed local and state revenue, the continued needs of residents and the complex task of balancing budgets, sometimes halfway through the fiscal year.

“The 9C cuts, they came with about 5 months of the year,” Saunders said referring to the state law that allows the governor to cut the budget in an emergency. For every aide dollar cut, “You had to cut $2 out of what was left in your budget.”

Saunders, left, with Gale Candaras and Rep. Angelo Puppolo second right. This photo was an event for Candaras’ Register of Probate bid. (via Facebook/Candaras campaign)

Saunders, soft-spoken, but pleasant and knowledgeable, has argued his experience as Candaras’ top aide and in town government makes him the best qualified candidate. Pitching himself as the Beacon Hill maven of the field, he has earned him some notable support, including most recently from Northwest District Attorney David Sullivan.

His resume on Beacon Hill was separate from the political career he developed in his hometown. Working on Beacon Hill exposed him to activists in the area, many of which are backing his campaign. But being a selectman offers a glimpse into his own experience governing.

Saunders had been active in local politics for some time. Since high school, he had been an elected member of Ludlow’s representative town meeting. He served as chair of the Ludlow Democrats for many years and has held other jobs in government.

In Ludlow, the Select Board acts as the executive branch of towns. Ludlow’s has five members who, as Saunders put it, act a legislature “short of a by-law” while day to day executive management is performed by the town administrator. By-laws and the budget are finalized at Town Meeting.

During an interview over lunch, Saunders described what he and the rest of the Select Board faced. “I try not to suffer from modesty, I was chairman through that time,” Saunders said, referring to some of the fiscal crunches the town has faced in recent years. He served as chair in 2011 and 2012. Saunders described in detail some of the measures the board took to balance the books. For example, the town realized savings by hammering out an agreement with municipal unions on health care. Saunders said with smart management of funds, the budget stayed balanced and only two layoff (later rescinded) were needed.

Ludlow School Committee member Jake Oliveira praised Saunders as someone who was “opening up town government as a more responsive organization.” On town finances, Oliveira said, “We had $1.2 million that we had to cut out of our budget in order to get us into a manageable situation.”

Oliveira, the chair of Ludlow Democrats, declined to state his decision in the race so as to not undermine the Ludlow Democratic Committee’s neutrality. They worked together on the state level, as Oliveira is employed by the group that represents state universities.

“He was always the go-to person in Gale’s office,” Oliveira said, noting his help in getting Candaras on board with re-designating the state colleges as universities.

Although at the same time, Oliveira said that he and Saunders did not interact much on the town level. Until recently, Saunders’s mother was a teacher. Consequently, he recused himself from most school-related Select Baord votes, although ethics law only require abstentions in very limited circumstances.

There were some complaints, however, when Saunders voted with the rest of the board to appoint a new firefighter in town. The applicant was the husband of Saunders’s campaign treasurer. Saunders, however, was philosophical about that action.

“Jay was the unanimous choice of the captains,” Saunders said of Jason Codding, the firefighter hired in July. “On the other hand,” Saunders continued, critics are “questioning my integrity.” “They’re welcome to,” he said indicating he has nothing to hide. He added he has turned friends asking for favors. 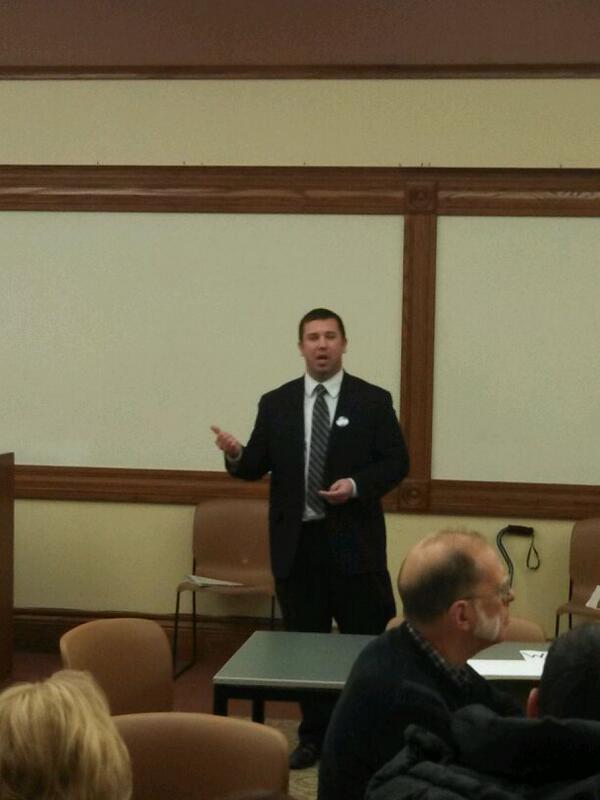 Saunders said some of the Board’s important work over the last six years was a little boring. The budgeting process was reformed to avoid dramatic swings in the tax rate. Preparations for disasters were improved. An HR Director was appointed, which encountered some opposition at first.

The renovation of Ludlow Mills, the large former factory right over the bridge from Indian Orchard, slated to begin after being idled about ten years ago. The plans were announced in 2011. “I really think that the timing of that, in the middle of recession and I have had the pleasure to be a part of.”

One area that Saunders mentioned was improving recreational opportunities around Springfield Reservoir. The manmade lake is controlled by Springfield’s Water & Sewer Commission as a backup supply. However, it was fenced off and unavailable for recreation. Oliveira said it was an issue Saunders pushed from early on. Saunders has been credited with bringing stakeholders together to secure its use for residents. Open about 300 days a year, a running path has been opened and fishing is permitted.

“These things, they may seem small on a certain level, but when you are able to move people’s lives,” Saunders paused, “I think that we are doing our job.”

Sitting at the intersection of town life and Candaras’ office has undoubtedly defined both Saunders and his campaign. “I am not sure there is a job or another away I could spend my time and then step into a race like this as a candidate,” he said. In other words, Saunders views knowledge of Beacon Hill’s pressure points as more effective than filing a bill a la Schoolhouse Rock.

The senate race has not been without rancor or discord, although Saunders has not quarreled with anybody much. He has compared himself with the candidate closest to him in age, Lesser, the former White House aide. Saunders noted that he, too, has federal experience having worked in former US Senator John Kerry’s Springfield office while a student at UMass-Amherst and after. He has not gone after Harrington much even though they share a hometown. Instead he argued he would competitive in Ludlow and fight down to the last vote there (and throughout the district).

Saunders campaign tone has been civil and largely a reflection of his personality: wonky, but reserved and calm. Although, at a forum at Loomis Lakeside Retirement Home at Reeds Landing, Saunders raised his energy level a bit, offering a strong promise to serve as an advocate and describing his family’s struggle when his father fell terminally ill.

Overall, though, he was on message and talked up his experience with getting things done as he had on the Select Board. “The real work is building those relationships that you create and those made available,” he told WMassP&I.